Diogenes of Babylon
For other uses, see Diogenes (disambiguation). 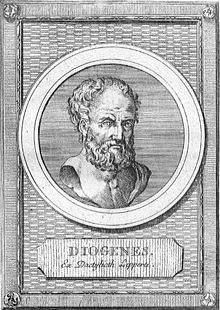 Diogenes of Babylon (also known as Diogenes of Seleucia; c. 230-c. 150/140 BCE[1]) was a Stoic philosopher. He was the head of the Stoic school in Athens, and he was one of three philosophers sent to Rome in 155 BC. He wrote many works, but none of his writings survive, except as quotations by later writers.

Born in Seleucia on the Tigris in Babylonia, Diogenes was educated at Athens under the auspices of Chrysippus and succeeded Zeno of Tarsus as head (scholarch) of the Stoic school there in the 2nd century BC. Among his pupils were Panaetius and Antipater of Tarsus who succeeded him as scholarch. He seems to have closely followed the views of Chrysippus, especially on dialectic, in which he is said to have instructed Carneades.[2]

Together with Carneades and Critolaus, he was sent to Rome to appeal a fine of hundred talents imposed on Athens in 155 BC for the sack of Oropus. They delivered their epideictic speeches first in numerous private assemblies, then in the Senate. Diogenes pleased his audience chiefly by his sober and temperate mode of speaking.[3]

Cicero calls Diogenes "a great and important Stoic."[7] In the works of the Epicurean philosopher Philodemus found in carbonized papyrus rolls recovered from the ruins of the Villa of the Papyri at Herculaneum, Diogenes is discussed more frequently than any philosopher besides Epicurus himself.[8]

He was the author of several works, of which, however, little more than the titles is known:

In addition, it appears from Philodemus that he wrote extensive works On Music and On Rhetoric.[16] Some aspects of his views on these two subjects are recoverable from the critical remarks to be found in Philodemus' works on these two subjects.[16] There are several passages in Cicero from which we may infer that Diogenes wrote on other subjects also, such as duty, the highest good, and the like.[17]

This article incorporates text from the public domain Dictionary of Greek and Roman Biography and Mythology by William Smith (1870).