Prior to Chandragupt's consolidation of power, small regional kingdoms dominated the northwestern subcontinent, while the Nanda Dynasty dominated the middle and lower basin of the Ganges.[6] After Chandragupt's conquests, the Maurya Empire extended from Bengal and Assam[7] in the east, to Afghanistan and Balochistan in the west, to Kashmir and Nepal[8] in the north, and to the Deccan Plateau in the south.[9]

His achievements, which ranged from conquering Macedonian satrapies in the northwest and conquering the Nanda Empire by the time he was only about 20 years old, to achieving an alliance with Seleucus I Nicator and establishing centralized rule throughout South Asia, remain some of the most celebrated in the history of India. Over two thousand years later, the accomplishments of Chandragupt stand out in the history of South Asia.

Many Indian literary traditions connect him with the Nanda Dynasty of Magadha in modern day Bihar in eastern India. More than half a millennium later, the Sanskrit drama Mudrarakshasa not only calls him Mauryaputra (Act II) but also a Nandanvaya (Act IV). Again more than a millennium later, Dhundiraja, a commentator of 18th century on Mudrarakshasa states that Chandragupta alias Maurya who, was son of the Nanda king Sarvarthasiddhi by a wife named Mura, daughter of a Vrishala (shudra). Mudrarakshasa uses terms like kula-hina and Vrishala for Chandragupta's lineage. This reinforces Justin's contention that Chandragupta had a humble origin.[10][11] On the other hand, the same play describes the Nandas as of Prathita-kula, i.e., illustrious lineage. The medieval commentator on the Vishnu Purana informs us that Chandragupta was son of a Nanda prince and a dasi (English: maid), mura. The poets Kshmendra and Somadeva call him Purvananda-suta, son of genuine Nanda as opposed to Yoga-Nanda, i.e., pseudo Nanda. Nanda dynasty was started by Mahapadma Nanda, who is considered, the first Shudra king of Magadha.

The Buddhist text of the Mahavamsa calls Chandragupta a section of the Khattya (Kshatriya) clan named Moriya (Maurya). Divyavadana calls Bindusara, son of Chandragupta, an anointed Kshatriya, Kshatriya Murdhabhishikata, and in the same work, king Ashoka, son of Bindusara, is also styled a Kshatriya. The Mahaparinnibhana Sutta of the Buddhist canon states that the Moriyas (Mauryas) belonged to the Kshatriya community of Pippalivana. These traditions, at least, indicate that Chandragupta has come from a Kshatriya lineage. The Mahavamshatika connects him with the Sakya clan of the Buddha, a clan which also belongs to the race of Aditya, i.e., solar race by all the vedas and Hindu puranas. See the page shakya for more details. All the puranas and vedas together proved shakya clan as a branch of ikshwaku vamsha or surya vamsha. All the Buddhist texts shows the genealogy of shakya kings of suryavamsha.

Ashok Maurya's inscription claiming to be 'Buddhi Sakya' further proves the Mauryas to be an offshoot of the Shakyas to whom 'Sakyamuni' Siddhartha Buddha belonged.

A medieval inscription represents the Maurya clan as belonging to the solar race of Kshatriyas. It is stated that the Maurya line sprang from Suryavamsi Mandhatri, son of prince Yuvanashva of the solar race.

Very little is known about Chandragupta's youth. what is known about his youth is gathered from later classical Sanskrit literature, as well as classical Greek and Latin sources which refer to Chandragupta by the names "Sandracottos" or "Andracottus". He was paragon for later rulers.

Plutarch reports that he met with Alexander the Great, probably around Takshasila in the northwest, and that he viewed the ruling Nanda Empire in a negative light:

According to this text, the encounter would have happened around 326 BCE, suggesting a birth date for Chandragupta around 340 BCE.

Junianus Justinus (Justin) describes the humble origins of Chandragupta, and explains how he later led a popular uprising against the Nanda king.

Foundation of the Maurya Empire

Chandragupt Maurya, with the help of Chanakya, defeated the Magadha kings and the bulk army of Chandravanshi clan. Following his victory, defeated generals of Alexander settled in Gandhara (Kamboja kingdom of Aryan Mahajanpad), today's Afghanistan. At the time of Alexander's invasion, Chanakya was a teacher at Takshasila University. The king of Takshasila and Gandhara, Ambhi (also known as Taxiles), made signed a peace treaty with Alexander. Chanakya, however, planned to defeat the foreign invasion and sought help from other kings to unite and fight Alexander. Parvateshwar (Porus), a king of Punjab, was the only local king who was able to challenge Alexander at the Battle of the Hydaspes River, but was defeated.

Chanakya then went to Magadha further east, to seek the help of Dhana Nanda, who ruled a vast Nanda Empire which extended from Bihar and Bengal in the east to Punjab and Sindh in the west,[12] but he was denied any such help. After this incident, Chanakya started to convince his disciple Chandragupt of the need to build an empire that could protect Indian territories from foreign invasion.

Chandragupt's teacher and later his prime minister[13] Chanakya, who is also known as Kautilya and was the author of the Arthashastra, is regarded as the architect of Chandragupt's early rise to power. Chandragupt Maurya, with the help of Chanakya, began laying the foundation of the Maurya Empire. In all forms of the Chanakya legend,[14] he is thrown out of the Nanda court by the king, whereupon he swears revenge. While in Magadha, Chanakya by chance met Chandragupt in whom he spotted great military and executive abilities. Chanakya was impressed by the prince's personality and intelligence, and immediately took the young boy under his wing to fulfill his silent vow.

The Nanda Empire at its greatest extent under Dhana Nanda circa 323 BCE.
Main article: Nanda Dynasty

According to Plutarch, at the time of Alexander's Battle of the Hydaspes River, the size of the Nanda Empire's army further east numbered 200,000 infantry, 80,000 cavalry, 8,000 chariots, and 6,000 war elephants, which was discouraging for Alexander's men and stayed their further progress into India:

In order to defeat the powerful Nanda army, Chandragupta needed to raise a formidable army of his own.[12]

Conquest of the Nanda Empire

Chandragupta's empire when he founded it c. 320 BCE, by the time he was about 20 years old.

Chanakya had trained Chandragupta under his guidance and together they planned the destruction of Dhana Nanda. The Mudrarakshasa of Visakhadutta as well as the Jaina work Parisishtaparvan talk of Chandragupta's alliance with the Himalayan king Parvatka, sometimes identified with Porus.[15]

It is noted in the Chandraguptakatha that the protagonist and Chanakya were initially rebuffed by the Nanda forces. Regardless, in the ensuing war, Chandragupta faced off against Bhadrasala – commander of Dhana Nanda's armies. He was eventually able to defeat Bhadrasala and Dhana Nanda in a series of battles, ending with the siege of the capital city Pataliputra[12] and the conquest of the Nanda Empire around 321 BCE,[12] thus founding the powerful Maurya Empire in Northern India by the time he was about 20 years old.

Conquest of Macedonian territories in India 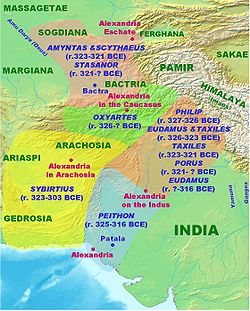 Chandragupta had defeated the remaining Macedonian satrapies in the northwest of the Indian subcontinent by 317 BCE.

After Alexander's death in 323 BCE, Chandragupta, turned his attention to Northwestern India (modern Pakistan), where he defeated the satrapies (described as "prefects" in classical Western sources) left in place by Alexander (according to Justin), and may have assassinated two of his governors, Nicanor and Philip.[disambiguation needed

][4][12] The satrapies he fought may have included Eudemus, ruler in western Punjab until his departure in 317 BCE; and Peithon, son of Agenor, ruler of the Greek colonies along the Indus until his departure for Babylon in 316 BCE. The Roman historian Justin described how Sandrocottus (Greek version of Chandragupta's name) conquered the northwest:

By the time he was only about 20 years old, Chandragupta, who had succeeded in defeating the Macedonian satrapies in India and conquering the Nanda Empire, had founded a vast empire that extended from the Bay of Bengal in the east, to the Indus River in the west, which he would further expand in later years. 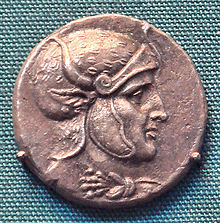 Silver coin of Seleucus I Nicator, who fought Chandragupta Maurya, and later made an alliance with him.

Chandragupta extended the borders of his empire towards Seleucid Persia after his conflict with Seleucus c. 305 BCE.

Seleucus I Nicator, a Macedonian satrap of Alexander, reconquered most of Alexander's former empire and put under his own authority eastern territories as far as Bactria and the Indus (Appian, History of Rome, The Syrian Wars 55), until in 305 BCE he entered in a confrontation with Chandragupta:

The exact details of engagement are not known. As noted by scholars such as R. C. Majumdar[16] and D. D. Kosambi, Seleucus appears to have fared poorly, having ceded large territories west of the Indus to Chandragupta. Due to his defeat, Seleucus surrendered Arachosia, Gedrosia, Paropamisadae, and Aria.

Mainstream scholarship asserts that Chandragupta received vast territory west of the Indus, including the Hindu Kush, modern day Afghanistan, and the Balochistan province of Pakistan.[17][18] Archaeologically, concrete indications of Mauryan rule, such as the inscriptions of the Edicts of Ashoka, are known as far as Kandhahar in southern Afghanistan.

It is generally thought that Chandragupta married Seleucus's daughter, or a Greek Macedonian princess, a gift from Seleucus to formalize an alliance. In a return gesture, Chandragupta sent 500 war-elephants,[16][19][20][21][22][23] a military asset which would play a decisive role at the Battle of Ipsus in 302 BCE. In addition to this treaty, Seleucus dispatched an ambassador, Megasthenes, to Chandragupta, and later Deimakos to his son Bindusara, at the Mauryan court at Pataliputra (modern Patna in Bihar state). Later Ptolemy II Philadelphus, the ruler of Ptolemaic Egypt and contemporary of Ashoka the Great, is also recorded by Pliny the Elder as having sent an ambassador named Dionysius to the Mauryan court.[24]

Classical sources have also recorded that following their treaty, Chandragupta and Seleucus exchanged presents, such as when Chandragupta sent various aphrodisiacs to Seleucus:

The extent of the Maurya Empire after Chandragupta's southern conquests c. 300 BCE.

After annexing Seleucus' eastern Persian provinces, Chandragupta had a vast empire extending across the northern parts of Indian Sub-continent, from the Bay of Bengal to the Arabian Sea. Chandragupta then began expanding his empire further south beyond the barrier of the Vindhya Range and into the Deccan Plateau except Tamil Country,Kalinga(modern day Orissa).[12] By the time his conquests were complete, Chandragupta succeeded in unifying most of Southern Asia. Megasthenes later recorded the size of Chandragupta's acquired army as 400,000 soldiers, according to Strabo:

Chandragupta gave up his throne towards the end of his life and became an ascetic under the Jain saint Bhadrabahu, migrating south with them and ending his days in sallekhana at Shravanabelagola, in present day Karnataka; though fifth-century inscriptions in the area support the concept of a larger southern migration around that time.[25] A small temple marks the cave (Bhadrabahu Cave) where he is said to have died by fasting.

There are two hills in Shravanabelagola, Chandragiri (Chikkabetta) and Vindyagiri. The last shruta-kevali, Bhadrabahu Swami, and his pupil, Chandragupta Maurya (formerly the King), are believed to have meditated here. Chandragupta Basadi, which was dedicated to Emperor Chandragupta Maurya, was originally built there by Emperor Ashoka in the third century BC.

Chandragupta Maurya renounced his throne to his son, Bindusara, who became the new Mauryan Emperor. Bindusara's son Ashoka the Great, became one of the most influential kings in India's history due to his important role in the history of Buddhism. Ashoka the Great after witnessing the results of his wars, became a devoted Buddhist and a man of peace.

Kautilya's role in the formation of the Mauryan Empire is the essence of a historical/spiritual novel The Courtesan and the Sadhu by Dr. Mysore N. Prakash.[26]