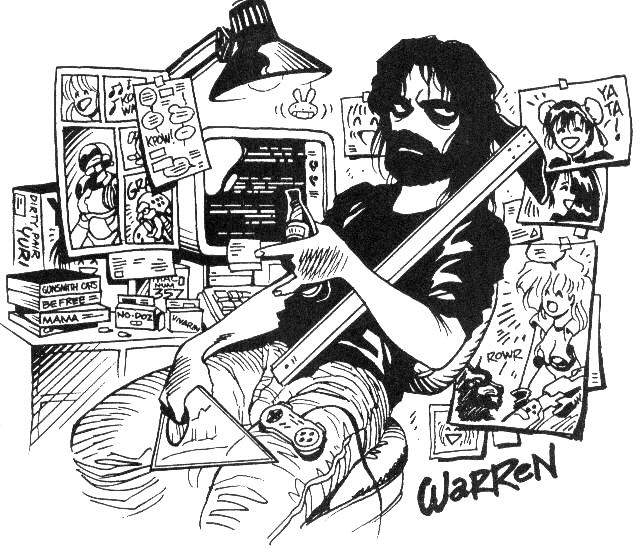 Adam Warren (born ) is an American comic book illustrator and writer who is most famous for his adaptation of the characters known as "" into its comic book form, and for being one of the first American commercial illustrators to draw using the style. He has also contributed to several "" comics, worked as writer and character designer for the series "Livewires", and done numerous works. His two latest projects are ": Hypervelocity "and "". [ [http://www.marvel.com/news/comicstories.788 Iron Man: Hypervelocity profile] at Marvels Website] [ [http://www.darkhorse.com/profile/profile.php?sku=14-043 Empowered profile] at Dark Horse's website.]

Born in , Warren reportedly gave up a promising job in the field of corporal vessel internment facility lawn care to attend the in . Starting school in 1985 Warren became unsure about his future in graphic art after less than a year of attendance. Over the Christmas break of his first year he chanced upon and , some of which was the original "Dirty Pair", and this renewed his drive to become an artist. After a year of attempting to acquire the rights to produce a comic based on the series he was finally able to make inroads with and . Warren put together a portfolio of "Dirty Pair"–related work which Smith then took to Sunrise Studios, but they were unimpressed with the work and negotiations went nowhere. Smith then contacted Takachiho Haruka, the creator of the "Dirty Pair", who was much more impressed with Warren's art and Smith's ideas and agreed to license the characters for an American comic. The only requirement was that the character designs be somewhat different from the anime versions to avoid copyright issues with Sunrise. This directly resulted in Warren's first major work, "Dirty Pair: ", which he co-wrote with Toren Smith and published through Studio Proteus and in 1989. The next two Dirty Pair works would be co-written with Smith but starting with the fourth book, "Sim Hell", it became a solo project.

Throughout the '90s and into the 2000s Warren produced several Dirty Pair comics and trade paperbacks, a four part "" series called "Grand Mal" [ [http://www.darkhorse.com/profile/profile.php?sku=44-615 Bubblegum Crisis profile] at Dark Horse's Website ] as well as cover, pin-up and other "freelance" art. During this time he provided numerous cover illustrations, most notably covers for the "", "", "" (while he was also penning a few stories), and "Appleseed" series, as well as some art, and even in-house s for Studio Proteus. Towards the end of the '90s and into early the 2000s he was one of the main writers, and to a lesser extent artist, for the "" series from comics. He has done art commission work for "" and "PSM " magazine. His PlayStation comics usually relate to their major featured article and are found on the back page of the magazine. His art has also been featured in their swimsuit edition. He has also been known to do some translation and scripting work, "" and "" being two of the only known credited examples.

Warren's more recent works include yet more freelance art for various companies, including a long run on the back page of "PSM "Magazine, and his latest completed series: "Livewires" and ": Hypervelocity". There have also been rumors of another "Dirty Pair" series in the works (as of 2005); although Warren had promised several times in the past to continue work with the Lovely Angels it has been several years since his last major "Dirty Pair" work. To date at least two planned DP related series have failed to come to market; the first a side-story meant to follow the character Shasti and the second a DP/ cross-over.

Warren's latest work, which he is be both writing and drawing, is a series of original graphic novels called "". He describes the series as "an episodic 'sexy superhero comedy', mixing a twisted take on costumed crime-fighting, romance, and absurdist workplace humor with a strong dose of that 'manga flava'... and just a dash of the kinky." The first trade paper back was published by Dark Horse Comics in March 2007 after a slight delay, Volume Two was released in September 2007, with Volume Three expected in March 2008. [ [http://www.darkhorse.com/profile/profile.php?sku=15-028 Empowered Volume Three] at Dark Horse's website.] This series is notable because it is not inked, but rather sourced directly from pencil drawing, something which Warren has not done for a complete series before and is not the norm in the American comic book industry.