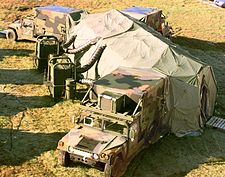 Overhead shot of a DASC setup

The Direct Air Support Center (DASC) is the principal United States Marine Corps aviation command and control system and the air control agency responsible for the direction of air operations directly supporting ground forces. It functions in a decentralized mode of operation, but is directly supervised by the Marine Tactical Air Command Center (TACC) or the Navy Tactical Air Control Center (NTACC). During amphibious or expeditionary operations, the DASC is normally the first MACCS agency ashore and usually lands in the same category (i.e.,scheduled or on call wave) as the Ground Combat Element's (GCE's) senior Fire Support Coordination Center (FSCC). The DASC's parent unit is the Marine Air Support Squadron (MASS) of the Marine Air Control Group (MACG).

The early forerunners of today's Tactical Air Control Party units were the Air Liaison Parties that accompanied the front-line divisions and served to request close air support and direct (but not control — the front was too narrow) aircraft to the target. Coordination of lower-echelon air requests became the province of four Landing Force Air Support Control Units (LFASCUs).

Photo showing the MTACS-2 at Hagaru-ri during the Battle of Chosin Reservoir.

Marine Tactical Air Control Squadron 2 (MTACS-2), the precursor to today's MASS-2 operated an Air Support section and conducted operations during the Korean War at the Pusan Perimeter, Battle of Inchon, Battle of Seoul, Battle of Chosin Reservoir, the East Central Front, and the Western Front.

What became to be known as the Marine Air Support Radar Team....TPQ 10...Devstate Charlie... all began at the Naval Air Missile Test Center, Point Mugu, CA in 1949. A small group of Marines, four officers (Captains Dalby, Johnston and Dressin and First Lt. Harris) and eight enlisted technicians (MSgts Hayden,Holtz, Dickover:TSgt Seissiger: SSgt Leber, Waggener, Darrow: and Cpl Gramza) Formed an ad hoc Marine organization...called the Marine Guided Missile Section...and with the assistrance of the German scientist Dr. Wagner conceived, built and tested a computer that would take the information from a tracking radar and provide the course for a LOON missile (the old German V-1 )to fly to a designated target. At the computed time the wings were blown off the missile and it would fall toward the target. During the testing period, since missiles were not readily available, a drone aircraft was flown as the missile and water filled bombs were dropped on the target (The pilot would not have liked us to blow the wings off!) The tests revealed that an all weather bombing system had been developed that could provide close air support. The original radar in the system was an SCR 784 borrowed from the Army at Ft. Bliss TX. The computer was in a van and not packaged for combat. When it was decided to send the system to Korea the computer was repacked in a 1/4 Ton trailer and the SCR 784 was replaced with the radar TPQ 10. After tests in the area near El Centro and at Camp Pendleton, the original group was augmented with other Marines and the 1st MARST was born, assigned to the 1st WAW, MTACS-2(who was radio call sign DEVASTATE)....and the 1st MASRT was DEVSTATE CHARLIE... The team joined the !st Marine Division in reserve in June 1951. What was to be a relative short combat evaluation became extended when the effectiveness of the system dictated that the system remain as a regular unit in the Air Wing. Of the original group of Marines at NAMTC, Point Mugu only two survive... LtColonel Robert G. Harris and LtColonel John Seissiger...all retired. The leader, Colonel M. C. Dalby died in 2008. 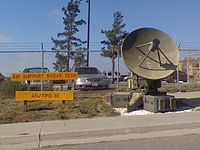 Photo of the AN/TPQ-10 Radar outside of the MASS-3 Headquarters building on Camp Pendleton, CA. This is one of the radars employed by the ASRTs during the Vietnam War.

In April 1965, MASS-2 and MASS-3 deployed to the Republic of Vietnam as part of the III Marine Amphibious Force and provided two Direct Air Support Centers and five Air Support Radar Teams (ASRTs) in support of ground combat units. From 1966-1971, MASS-3 ASRTs controlled more than 38,010 AN/TPQ-10 missions, directing more than 121,000 tons of ordnance on 56,753 targets.(10:1) The ASRTs utilized the AN/TPQ-10 with great success, especially during the Battle of Khe Sanh, where poor weather made conventional Close air support methods unreliable. The AN/TPQ-10 had a 50-yard (46 m) Circular error probable and could handle up to 105 missions a day. The commander of the Khe Sanh defense, Col. David M. Lownds, said "Anything but the highest praise would not have been enough."[1] By the end of the war, the DASCs and ASRTs participated in virtually every major Marine combat operation.[2]

In the early 1980s, the AN/TPQ-10 was replaced by the more sophisticated AN/TPB-1D, which, after extensive service in Operation Desert Storm, was removed from service due to the growing technological sophistication of onboard navigation and weapons delivery systems in modern fixed and rotary wing aircraft. During Operation Desert Storm the DASC was operational for 984 hours. They controlled 4948 fixed wing missions and 839 rotary wing missions. During this time they received 375 immediate joint tactical air requests (JTARs), 114 immediate assault support requests (ASRs) and 153 immediate medevacs.

For the 2003 invasion of Iraq, the DASC for the I Marine Expeditionary Force was provided by MASS-3 with augmentation from MASS-1 and MASS-6. It was broken up into a main echelon (DASC Main) and a forward echelon (DASC Fwd). The main was attached to the Main Headquarters of the 1st Marine Division while the forward was attached to the Division "Jump Command Post (CP)." The DASC (Fwd) was also apart of Task Force Tripoli when they went into Tikrit at the end of the invasion. Air support Marines also provided a smaller DASC for Task Force Tarawa, the British Forces on the Al Faw Peninsula, staffed a DASC(A) detachment out of Sheik Isa Airbase, Bahrain, then later Al Jaber Air Base in Kuwait and provided Air Support Liaison Teams (ASLTs) to all of the regiments within the 1st Marine Division.