Kambah (postcode 2902) is the northernmost suburb in the district of Tuggeranong, Canberra. It is located just south of the Mount Taylor in the Canberra Nature Park. It is located north of the suburbs of Greenway and Wanniassa. It is bounded by Sulwood Drive to the north and Athllon Drive to the south east.

Kambah was not designed according to the 'neighbourhood' philosophy guiding the design of other Canberra suburbs and is the largest suburb in the city with an area of 1130 ha. The suburb name was gazetted on 22 March 1973[2] and it was first settled in 1974 and consists predominantly of detached single storey suburban houses. It was the first suburb in the satellite city of Tuggeranong. Originally it was intended to be four separate suburbs, but only one name was available. [Explain?] Kambah was named after the Kambah Homestead which was originally located in the Tuggeranong district.[2] The name Kambah derives from Ngambri, the name of the clan that originally lived in the area before European occupation.[citation needed] The same word is the origin for the name Canberra.[citation needed]

In 2009, Kambah was voted the top ten bogan suburbs in Australia, according to the Punch Magazine.[3] 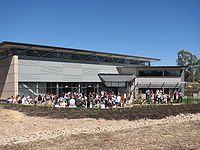 Opening of Parkway in April 2007

Several churches are located in Kambah. St. Stephen's Anglican Church, St. Thomas Catholic Church, the Christian City Church and the Tuggeranong Baptist Church were joined in 2007 by Parkway, an Apostolic Church that had lost its building in Holder during the 2003 Canberra bushfires. The new building caused some controversy, as the imposing structure was built on what had been open grassland next to the fire station, and in a very prominent location on the Tuggeranong Parkway. 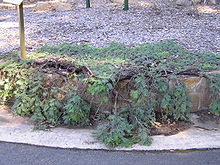 Located in the north of the suburb is the group centre called Kambah Village.[4][5][6] It has a supermarket, service station, hotel, clubs and many smaller shops and businesses. Located in the south is the Drakeford Drive Corridor;[4][5][7] this has evolved into the Kambah Centre, a medium sized community centre with a health centre, a storage facility, a service station, indoor sports facility, a Baptist Church, two Buddhist centres and a Jehovah's Witnesses centre. One of the car parks is used for model car racing by the ACT Remote Control Car Club. Kambah also has several smaller local centres scattered around the suburb.[4][5]

Kambah High School was a secondary school for years 7-10. It had Kambah and Greenway as its main intake area. At the end of 2007 the school educated around 140 students and employed around 20 staff[citation needed]. Kambah High was also closed at the conclusion of the 2007 school year as part of the ACT's Towards 2020 education reforms,[8] having operated for 31 years[citation needed]. Currently, the ACT Government plans to build a new P-10 school on the current Kambah High site. Tuggeranong School will open in 2011, and this will lead to discussion on closing Urambi Primary or amalgamating it into the new institution.[8]

West of Kambah is the Murrumbidgee River, one of Australia's major rivers. Surrounding hills include Mount Taylor, Arawang Hill, Mount Neighbour, McQuoids Hill, Forster Hill on the north side, and Urambi Hills on the south west side. Most of Kambah is occupied by the Village Creek Valley, but it also extends into Allens Creek and McQuoids Creek Valleys closer to the Murrumbidgee.

On the Murrumbidgee itself is the Red Rocks Gorge and Kambah Pool, a swimming hole. Kambah pool is the main swimming and fishing destination for South Canberrans[original research?][citation needed]. Kambah is home to many different types of fish (particularly carp) and mammals.[10] 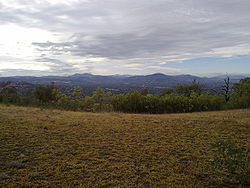 Kambah as viewed from Mount Taylor, to the north

Kambah is underlain by Silurian volcanics. Rhyodacitic ignimbrite in the form of grey rhyodacitic and dacitic crystal tuff is under most of Kambah apart from the eastern corner. These are Laidlaw Volcanics aged 420.7±2.2 mya of Ludlow Age.[11] In the east of Kambah alongside Athllon Drive can be found green-grey, purple and cream rhyolite, agglomerate, purple tuff or rhyodacite. In a band just to the west of this is red-purple and green-grey rhyodacite. This material is from the Deakin Volcanics and is older than the Laidlaw Volcanics.[12] Also around Kambah on some of the hills are outcroppings of a coarse pink-brown rhyodacitic intrusion of porphyry. These intrusions can be found on Neighbour Hill, Forster Hill, McQuoids Hill, and the east and south east of Mount Taylor also around Menzie Place and another patch around the south of Mount Neighbour pre school. These intrusions were likely the necks of volcanoes that erupted the other tuff and dacite in the area.

A Cenozoic age dyke of Teschenite intrudes the Laidlaw ignimbrite in the Kambah Pool and Red Rocks Gorge area.

Quaternary alluvium covers the ground around the upper reaches of Village creek, around Drakeford Drive. A fault runs from the north west in Allchin Circuit to the south east under Urambi primary school.[13]