Małopolska Voivodeship (in Polish, województwo małopolskie [vɔjɛˈvut​͡stfɔ mawɔˈpɔlskʲɛ]), or Lesser Poland Voivodeship, is a voivodeship(province), in southern Poland. It has an area of 15,108 square kilometres (5,833 sq mi), and a population of 3,267,731 (2006).

It was created on 1 January 1999 out of the former Kraków, Tarnów, Nowy Sącz and parts of Bielsko-Biała,[citation needed] Katowice, Kielce and Krosno Voivodeships, pursuant to the Polish local government reforms adopted in 1998. The province's name recalls the region's traditional name, Małopolska or Lesser Poland.

Malopolska Province is part of the broader ancient Małopolska region which, together with Greater Poland (Wielkopolska) and Silesia (Śląsk), formed the early medieval Polish state.

Almost all of Lesser Poland lies in the Vistula River catchment area. The city of Kraków was one of the European Cities of Culture in 2000. Kraków has railway and road connections with Katowice (expressway), Warsaw, Wrocław and Rzeszów. It lies at the crossroads of major international routes linking Dresden with Kiev, and Gdańsk with Budapest. Located here is the second largest international airport in Poland (after Warsaw's), the John Paul II International Airport.

The region's economy includes high technology, banking, chemical and metallurgical industries, coal, ore, food processing, and spirit and tobacco industries. The most industrialized city of the voivodeship is Kraków. The largest regional enterprise operates here, the Tadeusz Sendzimir Steelworks in Nowa Huta, employing 17,500 people. Another major industrial center is located in the west, in the neighborhood of Chrzanów (chiefly the production of railway engines) and Oświęcim (chemical works). Kraków Park Technologiczny, a Special Economic Zone, has been established within the voivodeship. There are almost 210,000 registered economic entities operating in the voivodeship, mostly small and medium-sized, of which 234 belong to the state-owned sector. Foreign investment, growing in the region, reached approximately USD 18.3 billion by the end of 2006.

130,000 students attend fifteen Kraków institutions of higher learning. The Jagiellonian University, the largest university in the city (44,200 students), was founded in 1364 as Cracow Academy. Nicolaus Copernicus and Karol Wojtyła (Pope John Paul II) graduated from it. The AGH University of Science and Technology (29,800 students) is considered to be the best technical university in Poland. The Academy of Economics, the Pedagogical University, the Kraków University of Technology and the Agricultural Academy are also very highly regarded. There are also the Fine Arts Academy, the State Theatre University and the Musical Academy. Nowy Sącz has become a major educational center in the region thanks to its Higher School of Business and Administration, with an American curriculum, founded in 1992. The school has 4,500 students. There are also two private higher schools in Tarnów.

Located in Southern Poland, Lesser Poland is the warmest place in Poland with an average temperature in the summer being between 23 °C (73.4 °F) and 30 °C (86 °F), although they often reach 32 °C (89.6 °F) to 38 °C (100.4 °F) in July and August the two warmest months of the year. The city of Tarnów, which is located in Lesser Poland, is the hottest place in Poland all year round, the average temperatures being 30 °C (86 °F) in the summer and 4 °C (39.2 °F) in the winter. In the winter the weather patterns alter each year; usually winters are mildly cold with temperatures ranging from -7 °C (19.4 °F)to 4 °C (39.2 °F), but the winter season changes often to a more humid and warmer winter, or more continental and cold. It all depends on the many various wind patters that affect Poland from different regions of the world. Błędów Desert the only desert in Poland is located in Lesser Poland, where temperatures can often reach up to 38 °C (100.4 °F) in the summer.

Four national parks and numerous reserves have been established in the voivodeship to protect the environment of Lesser Poland. The region has areas for tourism and recreation, including Zakopane (Poland's most popular winter resort) and the Tatra, Pieniny and Beskidy Mountains. The natural landscape features many historic sites. The salt mine at Wieliczka, the pilgrimage town of Kalwaria Zebrzydowska, and Kraków's Old Town are ranked by UNESCO among the most precious sites of world heritage. At Wadowice, birthplace of John Paul II (50 kilometers southwest of Kraków) is a museum dedicated to the late Pope's childhood. The area of Oświęcim, with the former Nazi concentration camps Auschwitz-I and Auschwitz-II-Birkenau, is visited annually by a million people. Another tourist destination is the town of Bochnia with its salt mine, Europe's oldest.

The voivodeship contains 61 cities and towns. These are listed below in descending order of population (according to official figures for 2006[1] ):

Lesser Poland Voivodeship is divided into 22 counties (powiats): 3 city counties and 19 land counties. These are further divided into 182 gminas. 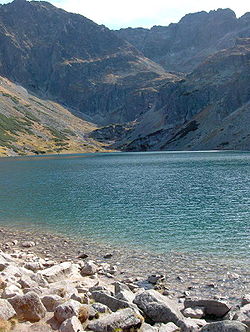 Czarny Staw in the High Tatras

Protected areas in Lesser Poland Voivodeship include six National Parks and 11 Landscape Parks. These are listed below.