Gordon is a suburb in the Canberra, Australia district of Tuggeranong. The postcode is 2906. The suburb is named after the poet Adam Lindsay Gordon (1833–1870).[2] It was gazetted on 12 March 1987.[2] Streets are named after sportspersons, an example is Woodfull Loop, named after the captain of the Australian cricket team during the Bodyline test series.[2]

It is next to the suburbs of Bonython, Conder and Banks. It is located on the west side of Tharwa Drive. Located in the suburb is the Point Hut Pond, with the Point Hut district park. Gordon has a primary school and neighbourhood oval. 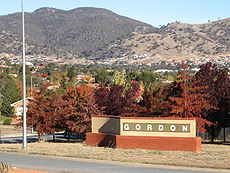 Quaternary alluvium is found in south and center of Gordon. Deakin Volcanics rhyodacitic crystal tuff from the Silurian age is on the surface in the north of the suburb.[3]