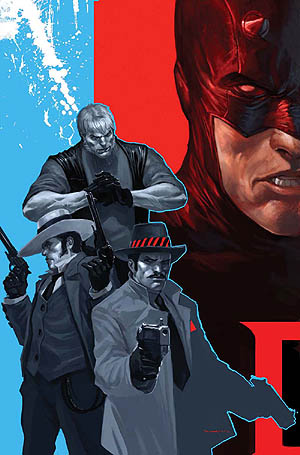 The Enforcers is a fictional team of villains in the universe. Created by writer-editor and artist and co-plotter in "The Amazing Spider-Man" #10 (March 1964).

The group originally consisted of:
* Big Man, the leader, secretly , a "" journalist
* , a diminutive martial artist. Daniel Brito was born in Brooklyn, New York. He has great proficiency with judo, karate, and fancy footwork.
* The Ox, Raymond Bloch, a brute strongman
* Montana, an expert -wielder

The Enforcers are a group of hired assassins and extortionists, each with an expertise in a different unique area of combat, whose goal it is to aid various employers in the takeover of New York City's criminal gangs. Following its formation under leader the Big Man (), the Enforcers aided the Big Man in his attempt to gain control of New York City's criminal gangs. They clashed with the superhero for the first time, and are defeated by him. ["Amazing Spider-Man" #10] They next aided the in his first unsuccessful attempt to eliminate Spider-Man. ["Amazing Spider-Man" #14] Soon after that, they joined forces with the Sandman to subdue the , but are defeated by the combined might of Spider-Man and the Human Torch. ["Amazing Spider-Man" #19]

The Enforcers clash repeatedly with Spider-Man and occasionally other heroes such as Daredevil. Foswell is eventually unmasked and killed. After the Ox, later, appears to be killed ["Daredevil" #86] , Montana and Fancy Dan team with a new Big Man, as well as with the Sandman and a new Crime Master, Nick Lewis, Jr. son of the original. During a battle in which the team is defeated by Spider-Man, the Human Torch, and the , Crime Master shoots the new Big Man, learning belatedly that this "Big Man" was, in fact, a woman &mdash; Janice Foswell, daughter of the original and the younger Lewis' romantic interest. ["" #39-40]

The Enforcers were hired by the , who introduced a new Ox, Raymond Bloch's twin brother Ronald Bloch, to the team. The Enforcers are once again defeated by Spider-Man. ["" #19-20] They later battle the superhero .

The Enforcers return with new members Snake Marston, a master contortionist and , a boxer who used two steel gloves. The Enforcers come under the employ of the Kingpin, but were defeated by Spider-Man and the reformed Sandman. ["Marvel Team Up" #138] This lineup appears only once more, to fight Daredevil. ["Daredevil" vol. 1, #356-357]

During the events known as the superhero Civil War, either Raymond or Ronald Bloch and Snake Marston are recruited into the Thunderbolts, a team of reformed villains. ["Thunderbolts" #103-104] Later, they came back together to work for , which pitted them directly against Daredevil. After Mister Fear's arrest, the Enforcers are taken in by the Hood's organization.

Following the events of , the Enforcers are patrons at the Bar with No name. they take bets with a person calling himself "The Bookie", over whether Spider-Man will show up to battle "Basher", an unknown villain who claimed to have fought Spider-Man. Spider-Man shows up, but is revealed to be a fake when the real web-head shows up. The Enforcer decide to get revenge on The Bookie, capturing him. The Bookie's father calls Spider-Man for assistance, and he agrees to help. Spider-Man defeats Fancy Dan and Montana, and saves Ox from being flattened by a falling rollercoaster. Grateful for the save, Ox agrees to come along quietly. ["Amazing Spider-Man" #563]

In the alternate universe continuity, the Enforcers were re-imagined as hit men for the Kingpin, and pitted against Spider-Man. The following changes took place:

* Frederick Foswell was called "Mr. Big" and was not associated with the "" - but videotapes of his untimely murder by the Kingpin were sent to Ben Urich and used for a Daily Bugle Exclusive
* "Fancy Dan", was re-imagined as a young gunslinger and was called "Dan Rubinstein"
* "The Ox", was re-imagined as an called "Bruno Sanchez"
* "Montana" had the civil name "Montana Bale" and used a whip instead of a lasso (although he often used it to strangle Spider-Man and like a lasso).

After losing twice to Spider-Man, the Enforcers supposedly disbanded. Much later, they came back together to work for Hammerhead. This pitted them directly against their former employer.

In the 1967 "Spider-Man" cartoon, Ox and Montana (known as Cowboy) were employed by the Plotter.

The Enforcers appear in "The Spectacular Spider-Man". [ [http://www.comicscontinuum.com/stories/0708/27/index.htm Comics Continuum by Rob Allstetter: Monday, August 27, 2007 ] ] They appear in the first episode, "Survival of the Fittest", along with Hammerhead. [ [http://www.comicscontinuum.com/stories/0801/14/index.htm Comics Continuum by Rob Allstetter: Monday, January 14, 2008 ] ] In the episode they are employed by the Big Man who is unseen. In the show, the Enforcers are re-imagined as a tactical strike team with modern weaponry, suits and equipment. Montana is the leader and strategist of the team, with a strong southern accent. Instead of wielding a lasso like his counterpart in the main marvel universe, he uses an attack helicopter with various weapons and gives the orders to the rest of the team. Ox is much like his counterpart in Marvel Universe, a simple-minded strongman. Perhaps the largest difference is his moustache. Fancy Dan, similar to his own counterpart is a martial artist skilled enough to combat Spider-Man despite his superhuman powers. He is African American, and wields a metal staff.

At the end of the episode, Fancy Dan and Ox are captured but Montana escapes. He reappears several episodes later as this series' version of The Shocker. As for the Big Man, the episode "The Invisible Hand" seemingly reveals Tombstone as this series' Big Man. In "Group Therapy", the Enforcers escape with the ; however Montana stays behind as the Shocker while Ox and Fancy Dan escape with Hammerhead, Tombstone's henchman.