Mouthwash or mouth rinse is a product used to enhance oral hygiene. Some manufacturers of mouthwash claim that antiseptic and anti-plaque mouth rinse kill the bacterial plaque causing cavities, gingivitis, and bad breath. Anti-cavity mouth rinse uses fluoride to protect against tooth decay. It is, however, generally agreed that the use of mouthwash does not eliminate the need for both brushing and flossing.[1][2][3] As per the American Dental Association, regular brushing and proper flossing are enough in most cases although the ADA has placed its Seal of Approval on many mouthwashes containing alcohol (in addition to regular dental check-ups).[4]

Mouthwash may also be used to help remove mucus and food particles deeper down in the throat.[citation needed] Alcoholic and strongly flavored mouthwash may cause coughing when used for this purpose.

The first known references to mouth rinsing is in Ayurveda and Chinese medicine, about 2700 BC, for treatment of gingivitis.[citation needed] Later, in the Greek and Roman periods, mouth rinsing following mechanical cleansing became common among the upper classes, and Hippocrates recommended a mixture of salt, alum, and vinegar.[5] The Jewish Talmud, dating back about 1800 years, suggests a cure for gum ailments containing "dough water" and olive oil.[6]

Anton van Leeuwenhoek, the famous 17th century microscopist, discovered living organisms (living, because they were motile) in deposits on the teeth (what we now call dental plaque). He also found organisms in water from the canal next to his home in Delft. He experimented with samples by adding vinegar or brandy and found that this resulted in the immediate immobilization or killing of the organisms suspended in water. Next he tried rinsing the mouth of himself and somebody else with a mouthwash containing vinegar or brandy and found that living organisms remained in the dental plaque. He concluded—correctly—that the mouthwash either did not reach, or was not present long enough, to kill the plaque organisms.[citation needed]

That remained the state of affairs until the late 1960s when Harald Loe (at the time a professor at the Royal Dental College in Aarhus, Denmark) demonstrated that a chlorhexidine compound could prevent the build-up of dental plaque. The reason for chlorhexidine effectiveness is that it strongly adheres to surfaces in the mouth and thus remains present in effective concentrations for many hours.[7]

Since then commercial interest in mouthwashes has been intense and several newer products claim effectiveness in reducing the build-up in dental plaque and the associated severity of gingivitis (inflammation of the gums), in addition to fighting bad breath. Many of these solutions aim to control the Volatile Sulfur Compound (VSC)-creating anaerobic bacteria that live in the mouth and excrete substances that lead to bad breath and unpleasant mouth taste.[8][9]

Common use involves rinsing the mouth with about 20ml (2/3 fl oz) of mouthwash two times a day after brushing. The wash is typically swished or gargled for about half a minute and then spat out. In some brands, the expectorate is stained, so that one can see the bacteria and debris.[10][11] Some may suggest that it is probably advisable to use mouthwash at least an hour after brushing with toothpaste when the toothpaste contains sodium lauryl sulfate, since the anionic compounds in the SLS toothpaste can deactivate cationic agents present in the mouthrinse.[12] However, many would disagree with this hypothesis; in fact, many of the popular mouthwashes contain sodium lauryl sulfate as an ingredient (e.g., Listerine Total Care).[citation needed] 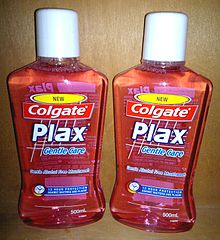 Sometimes a significant amount of alcohol (up to 27% vol) is added,[18] as a carrier for the flavor, to provide "bite".[19] Because of the alcohol content, it is possible to fail a breathalyzer test after rinsing although breath alcohol levels return to normal after 10mins;[citation needed] in addition, alcohol is a drying agent and may worsen chronic bad breath.[citation needed] Furthermore, it is possible for alcoholics to abuse mouthwash.[citation needed] Recently, the possibility that the alcohol used in mouthrinses acts as a carcinogen was raised, but there is to date no scientific consensus on the issue.[20][21][22] Commercial mouthwashes usually contain a preservative such as sodium benzoate to preserve freshness once the container has been opened. Many newer brands are alcohol-free and contain odor-elimination agents such as oxidizers, as well as odor-preventing agents such as zinc ion to keep future bad breath from developing.[citation needed]

A salt mouthwash is a home treatment for mouth infections and/or injuries, or post extraction, and is made by dissolving a teaspoon of salt in a cup of warm water.

Vodka, gin and other hard liquors (with alcohol content of 35% or more) can be used as an alternative to Listerine, especially if one is looking for a mouthwash with only natural ingredients. Flavored spirits, such as London dry gin, work especially well as the flavorings can mask the alcohol smell. However, such use can be problematic in households with children.

Recently, the use of herbal mouthwashes such as persica is increasing, due to the perceived discoloration effects and unpleasant taste of chlorhexidine.[23] Research has also indicated that sesame and sunflower oils as cheap alternatives compared to chlorhexidine.[24][25]

Other products like hydrogen peroxide have been tried out as stand-alone[26] and in combination with chlorhexidine, due to some inconsistent results regarding its usefulness.[27]

Another study has demonstrated that daily use of an alum-containing mouthrinse was safe and produced a significant effect on plaque that supplemented the benefits of daily toothbrushing.[28]

However, many studies acknowledge that Chlorhexidine remains the most effective mouthwash when used on an already clean tooth surface or immediately after surgery. As chlorhexidine has difficulty in penetrating plaque biofilm, other mouthwashes may be more effective where pre-existing plaque is present. One side-effect as noted on the label is the staining of the teeth will occur for prolong usage.[citation needed]

Custom mouthwashes, called "magic mouthwash" may be prescribed by dentists for post oral surgeries. Variations are common, and some are done with over-the-counter products.[citation needed]

A literature review by Michael McCullough and Camile Farah, published in the Australian Dental Journal in 2008, focused on a possible connection between mouthwashes that contain alcohol, and an increased risk of oral cancer.

There is now sufficient evidence to accept the proposition that developing oral cancer is increased or contributed to by the use of alcohol-containing mouthwashes. Whilst many of these products may have been shown to be effective in penetrating oral microbial biofilms in vitro and reducing oral bacterial load, it would be wise to restrict their use to short-term therapeutic situations if needed. Perhaps the use of mouthwashes that do not contain alcohol may be equally effective. Further, mouthrinses should be prescribed by dentists, like any other medication. There may well be a reason for the use of alcohol-containing mouthrinses, but only for a particular situation and for a limited and controlled period of time. As such, patients should be provided with written instructions for mouthwash use, and mouthwash use should be restricted to adults for short durations and specific, clearly defined reasons. It is the opinion of the authors that, in light of the evidence currently available of the association of alcohol-containing mouthwashes with the development of oral cancer, it would be inadvisable for oral healthcare professionals to recommend the long-term use of alcohol-containing mouthwashes.
—McCullough and Farah, Australian Dental Journal[29]

McCullough and Farah also state that the risk of acquiring cancer rises almost five times for users of alcohol-containing mouthwash who neither smoke nor drink (with a higher rate of increase for those who do).[30] In addition, the authors highlight side effects from several mainstream mouthwashes that included dental erosion and accidental poisoning of children.

The review garnered media attention[31] and conflicting opinions from other researchers. Yinka Ebo of Cancer Research UK disputed the findings, concluding that "there is still not enough evidence to suggest that using mouthwash that contains alcohol will increase the risk of mouth cancer".[32] Studies conducted in 1985,[33] 1995,[34] and 2003[35] did not support an association between alcohol-containing mouth rinses and oral cancer. Andrew Penman, chief executive of The Cancer Council New South Wales, called for further research on the matter.[36] In a March 2009 brief, the American Dental Association said "the available evidence does not support a connection between oral cancer and alcohol-containing mouthrinse".[37]

Mouthwashes containing cetylpyridinium chloride are also associated with loss of taste sensation and brown discolouration of the teeth.[citation needed]