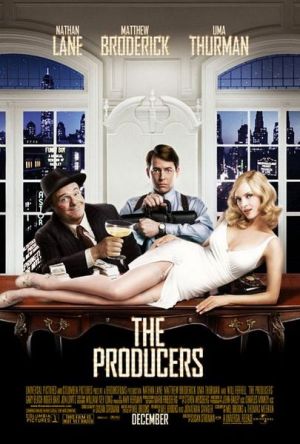 
"The Producers" is a 2005 comedy- starring and 's and . It is based on the 2001 Broadway musical of the same name and a of the 1968 movie starring , , and . The movie is directed by (the director and choreographer of the original Broadway production). It was produced and distributed domestically by and distributed overseas by .

The film opens ("Opening Night") with the flop musical "Funny Boy" based on 's "." Afterward, () arrives at the office of the show's washed up producer, (). Max has hired Leo Bloom as his accountant. While studying Max's books, Leo inadvertently inspires Max to put on a show that is certain to fail at the box office and cleverly change their accounts leaving them with $2,000,000 to spend. At first, Leo refuses to participate. Max, who cannot change the books himself, attempts to coax Leo into the scheme ("We Can Do It"). Leo still refuses and returns to his old accounting firm, Whitehall & Marks.

After being chastised by Mr. Marks (), Leo fantasizes about being a Broadway producer ("I Wanna Be a Producer"). Leo quits his job and with Max, forms Bialystock & Bloom. Max and Leo search for "the worst play ever written" and discover "," written by an ex-Nazi named Franz Liebkind (). They are coerced into performing 's favorite tune in order to gain Liebkind's signature for Broadway rights to the musical ("Der Guten Tag Hop-Clop"). They solicit a flamboyant gay director, Roger De Bris () ("the worst director in the world"), to direct and choreograph the play. De Bris initially refuses saying that the musical is far too dark and gritty and that Broadway needs to be more "gay" ("Keep It Gay"). Roger is talked into it, however, after being enticed by Max and Leo, who tell him that if he directs the play, he is certain to win a Tony. Then, Ulla (), a beautiful Swedish woman, appears at their office for casting despite there being no auditions. Max insists on hiring her as their secretary and auditioning her ("When You've Got It, Flaunt It").

To gain the finances for the musical Max has sexual affairs with every old lady across town ("Along Came Bialy"). Max and Leo return to the office to discover that Ulla has redecorated it to be entirely white. After Max leaves, Leo laments about Ulla and the dangers of sexual affairs straying him from his work, culminating in a kiss between Leo and Ulla ("That Face"). Later, at the auditions for the role of Hitler, Franz becomes angered at a performer's rendition of a beloved German song. Franz storms the stage and sings the song the correct way ("Haben sie gehört das deutsche band?"). Max hires Franz to play Hitler.

On opening night, as the cast and crew prepare to go on stage, Leo wishes everyone "good luck", to which the players are horrified. They explain to Leo that it is in fact "bad luck" to say "good luck" on opening night and that the correct phrase is to say "break a leg" ("You Never Say Good Luck on Opening Night"). Franz leaves to prepare and, in his rush, literally breaks his leg. Max enlists Roger to perform the role in his place, and Roger accepts.

As the show opens, the audience is horrified and begins to walk out until Roger steps on stage as Hitler. Because his performance is so flamboyant, the audience sees the play as a mockery of Hitler rather than Franz's original vision ("Springtime for Hitler"). As a result, the show is a success and the IRS will be keeping tabs on Max and Leo. Max gets arrested for his tax fraud while Leo and Ulla escape to Rio ("Betrayed"), however they return to stand up for Max in court ("'Til Him"). The judge sentences them both to five years at prison, but they are pardoned after writing a musical in prison ("Prisoners of Love"), and go on to become successful Broadway producers.

After the credits roll ("There's Nothing Like a Show on Broadway"), there is an extra song ("Goodbye!") by the cast.

"The Producers" received mixed reviews from critics. One positive online review said: "Outrageous musical numbers evoke most of the laughs in this movie funfest. Eat your heart out, Rockettes, because here comes a little old ladies’ chorus line (“Along Came Bialy”) to rival your success. Watch out, real-life producers, for an actor named Gary Beach (“Heil Myself”). Never, and I mean never, hire him if you want your play to flop! And stop spinning in your grave, Florenz Ziegfeld. Those “Springtime for Hitler and Germany” showgirls are all in good fun. Finally, congratulations to director Susan Stroman, for making this Broadway gem into a film that old-time movie musical fans like me can cheer about." [ [http://www.reeltalkreviews.com/browse/viewitem.asp?type=review&id=1515 ReelTalk Movie Reviews ] ]

Nathan Rabin wrote: "Between the rough start and an ending that lingers too long, there's a solid hour or so of terrific entertainment that serves as both a giddy tribute to Broadway musicals and a parody thereof. Thirty-seven years after Brooks declared war on taste and propriety, 'The Producers' has lost its power to shock or offend, but it's retained its ability to amuse." [ [http://www.avclub.com/content/node/43532 The Producers] ]

cited difficulty in reviewing the film due to familiarity with the original 1968 film. However, he did state that the new version was "fun" and gave it three stars (out of a possible four). Said Ebert: "The new movie is a success, that I know. How much of a success, I cannot be sure."

Most negative reviews suggested that the performances were tuned more for the theater rather than for film. Stephanie Zacharek observed: "'The Producers' is essentially a filmed version of a stage play, in which none of the characters' expressions or line readings have been scaled down to make sense on-screen. Every gesture is played out as if the actors were 20 feet away in real life, which means that, by the time the performers are magnified on the big screen, they're practically sitting in your lap. The effect is something like watching a 3-D Imax movie without the special glasses.

* In the song "Opening Night", a newspaper theatre review is shown on the screen; on the byline, credit is given to Addison DeWitt, the theatre critic played by in 1950's .
* Although it's never said, the film takes place in 1959, when Broadway was a prominent piece of entertainment. ['s comments on the DVD audio commentary.]
* In the scene when Ulla first enters Bialystock's office, the King Leer poster next to the door can be seen, and after a few seconds, its eyes start spinning.
* The voices of 'Tom The Cat' (who is thrown by Bialystock into the theater) and the Stormtrooper who says 'Don't be stupid, be a smarty, come and join the Nazi Party!' are provided by Mel Brooks, two voices he also pre-recorded for the Broadway show and one voice (the latter) that he did in the original movie.
* After the closing credits, there is an additional song where the cast bids good-bye to the audience. This number is also sung in the stage production right after the final company bow. At the end of the number is a cameo by Mel Brooks himself, who tells the audience: 'Get out, it's over'. In an interview, Brooks complained that audiences wanted to stay in the theater after the show was over. He specifically wrote this song to tell everyone to leave.
* When Leo Bloom shouts "Stop the world, I wanna get on!" it is a reference to the musical "".
* When Max is visiting the old ladies in their apartment buildings, he pushes several intercom buttons, labeled with names of the residents they refer to. Many of these are references to famous people::*'A. Bancroft', Mel Brooks' late wife, .:*'J. Gatsby', the eponymous protagonist of 's novel "".:*'Bloomingdales', the name of a department store.:*'Tisch', the Tisch School of Arts and Tisch Hospital at .:*'C. F. Kane', referring to Charles Foster Kane, from the film "".:*'E. Wharton', referring to author of "".:*'M. Kaminsky', Mel Brooks' birth name, Melvin Kaminsky.:*'A. Carnegie' ().:*'J.J. Astor' (). :*'J. Rockefeller' ().
* A black fedora is the "Broadway producer's hat" that Max finally allows Leo to wear in the last scene.
* While talking about the $2,000 missing from Max's books after "Funny Boy", the calendar behind Max and Leo reads June 16th. The date is known as "Bloomsday" (later referenced when Leo and Max agree go ahead with their plan) by fans of and his novel "Ulysses". Joyce's character Leopold Bloom experiences extraordinary things on what's supposed to be an ordinary day - June 16th.
* The two main stars of the film, and previously worked together voicing friends Timon the meerkat and the lion in Disney's 1994 animated motion picture . A scene shot for The Producers, but deleted featured the pair on-screen with , who voiced the third member of their friendship, Pumbaa the warthog. This scene is included on the DVD. The scene is called the Astro Bar and shows where Max and Leo escaped to during the middle of Springtime for Hitler when Max said, "Let's get out of here before they kill us". The three are the only in the bar and Max buys a round for all of them and sings about Rio. Eventually Max and Leo leave to see how bad there show flopped(they had no idea how people reacted to Roger's Hitler) while Ernie Sabella stays.
* At the end of the song "The Hop-Clop Goes On" Franz whispers, "Don't forget to buy , in . Available near you at Borders Books or und ."
*When Bialystock and Bloom are searching for the worst play ever written in act 1, Bialystock reads out the opening to , an existential novella by

References to other Brooks works

In the movie there are references to other movies by Mel Brooks, including:
*"": Ulla asks if she can audition for Max and Leo, Leo begins to say, "Oh no, miss, that won't be nece–" (interrupted, the full word being "necessary"). Max interrupts him, saying "Yes, it is 'nece,' extremely 'nece'!".
*"": A condition of Liebkind allowing "Springtime" to be performed on Broadway is that Bialystock and Bloom take the 'Siegfried Oath'. Siegfried was a character with a thick German accent and Maxwell Smart's main adversary on "Get Smart", the television show created by Brooks.
*""; while looking over the contracts in the freshly-painted office, Leo says to himself, "Work work work, work work work, work work work." In Max's prison scene, the prison guard says he has a postcard from someone in Brazil, Max wonders aloud who he knows in Brazil, before asking the guard, "Why am I asking you?". Carmen Ghia's drawn out "Yesssss?" is also a reference to Blazing Saddles, heard during the gay dancers scene headed by . When Max uses the line 'you Teutonic twit' it is a reference to 's 'you Teutonic twat'. As Bialystock and Bloom leave the roof Franz leans against the door and says, "What nice guys" in the same manner that does when leaves her dwessing woom saying, "What a nice guy."
*"To Be or Not to Be"; while playing Hitler, Roger sings a song entitled "Heil Myself".
*""; the "walker dance" during the number "Along Came Bialy"
*""; while in Sing Sing prison, the inmates are seen rehearsing a dance for "Prisoners of Love". This is the same dance done by Dr. Frederick Frankenstein and the Frankenstein Monster.

Certain actors in the film have been involved in previous Brooks related productions, such as , who played Olson Johnson in "Blazing Saddles" and Thomas Meehan, who co-wrote "", the film's previous musical incarnation's book and the film itself with Brooks.