The Advanced Packaging Tool, or APT, is a free user interface that works with core libraries to handle the installation and removal of software on the Debian GNU/Linux distribution and its variants.[2] APT simplifies the process of managing software on Unix-like computer systems by automating the retrieval, configuration and installation of software packages, either from binary files or by compiling source code.[2]

APT was originally designed as a front-end for dpkg to work with Debian's .deb packages, but it has since been modified to also work with the RPM Package Manager system via apt-rpm.[3] The Fink project has ported APT to Mac OS X for some of its own package management tasks, and APT is also available in OpenSolaris (included in the Nexenta OS distribution).[4] Cydia is a package manager for jailbroken iOS partially based on APT (ported to iOS as part of the related Telesphoreo project).[5][6]

There is no single "apt" program; apt is itself the package name containing the set of tools (and requiring the libraries) that support its functionality. A significant part of apt is a C++ library of functions (another package known as libapt) which are used by these related front-end programs for dealing with packages, such as apt-get and apt-cache. They are commonly used in examples due to their simplicity and ubiquity; apt-get and apt-cache are of "important" priority in all current Debian releases, and are therefore installed in a default Debian installation. Apt can be functionally considered to be a front-end to dpkg, and a friendlier front end to this than dselect. While dpkg performs actions on individual packages, apt tools manage relations (especially dependencies) between them, as well as sourcing and management of higher-level versioning decisions (release tracking and version pinning).

APT is often hailed as one of Debian's best features.[7][8][9][10] It is remarked that this quality comes from the strict quality controls of Debian policy.[11][12]

A major feature in APT is the way it calls dpkg — it does topological sorting of the list of packages to be installed or removed and calls dpkg in the best possible sequence. In some cases, it utilizes the --force options in dpkg. However, it only does this when it is unable to calculate how to avoid the reason dpkg requires the action to be forced.

The most used apt-get commands are apt-get install package-name (frequently the package-name is simply the name of the desired executable application), apt-get update, apt-get upgrade and apt-get dist-upgrade.

An install directive is followed by the name of one or more packages desired for installation. Each package name is phrased as just the name portion of the package, not a fully qualified filename (for instance, in a Debian GNU/Linux system, libc6 would be the argument provided, not libc6_1.9.6-2.deb). Notably, all packages containing dependencies required by the package(s) specified for installation will also be automatically retrieved and installed. This was an original distinguishing characteristic of apt-based package management systems whereby software installation failure due to missing dependencies, a type of dependency hell, was specifically avoided.

Another such distinction is remote repository retrieval of packages. A location configuration file (/etc/apt/sources.list) is used to locate the desired packages and retrieve them, and also obtain information about available (but uninstalled) packages.

Other command option features (switches) may be used to override decisions made by apt-get's conflict resolution system. If a hyphen is appended to the package name (with no intervening space), the identified package will be removed if it is installed. Similarly, a plus sign can be used to designate a package to install. A specific version of a package can be selected for installation by following the package name with an equals and the version of the package to select. This will cause that version to be located and selected for install. Alternatively a specific distribution can be selected by following the package name with a slash and the version of the distribution or the archive name (stable, testing, unstable).

Both of the version selection mechanisms can downgrade packages and must be used with care.

/etc/apt has the apt configuration folders and files.

APT relies on the concept of repositories in order to find software and resolve dependencies. For apt, a repository is a directory containing packages along with an index file. This can be specified as a networked or CDROM location. The Debian project keeps a central repository of over 25,000 software packages ready for download and installation.

For extra packages, any number of additional repositories can be added to APT's sources.list configuration file (/etc/apt/sources.list) and then be queried by APT. Graphical front-ends often allow modifying sources.list more simply (apt-setup). Once a package repository has been specified (like during the system installation), packages in that repository can be installed without specifying a source.

In addition to network repositories, compact discs and other storage media (USB keydrive, hard disks...) can be used as well, using apt-cdrom [17] or adding file:/[18] to the source list file. Apt-cdrom can specify a different folder than a cd-rom, using the -d option (i.e. a hard disk or a USB keydrive). The Debian CDs available for download contain Debian repositories. This allows non-networked machines to be upgraded. Also one can use apt-zip.

Problems may appear when several sources offer the same package(s). Systems that have such possibly conflicting sources can use APT pinning to control which sources should be preferred.

In order to do this, the pins in APT's preferences file (/etc/apt/preferences) must be modified,[19] although graphical front-ends often make pinning simpler. 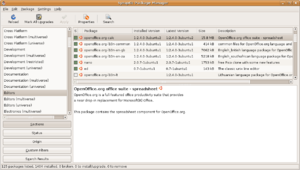 Synaptic Package Manager is one of the frontends available for APT

Several other front-ends to APT exist, which provide more advanced installation functions and more intuitive interfaces. These include:

APT front-ends can list the dependencies of packages being installed or upgraded, ask the administrator if packages recommended or suggested by newly installed packages should be installed too, automatically install dependencies and perform other operations on the system such as removing obsolete files and packages.

The original effort that led to the apt-get program was the dselect replacement project known by its codename deity.[23] This project was commissioned by Brian White, the Debian Release Manager at the time. The very first functional version of apt-get was called dpkg-get and was only intended to be a test program for the core library functions that would underpin the new UI.[24]

Much of the original development of APT was done on IRC, so records have been lost. The 'Deity Creation Team' mailing list archives include only the major highlights.

The Deity name was abandoned as the official name for the project due to concerns over the religious nature of the name. The APT name was eventually decided after considerable internal and public discussion. Ultimately the name was proposed on IRC, accepted and then finalized on the mailing lists.[25] As originally used, APT is not an acronym, but a proper name. The name gained mindshare during IRC discussions[citation needed] due to the variety of possible acronym expansions and it was ultimately decided that the official use of APT would be as a proper name and no official expansion would ever be presented by the team.

APT was introduced in 1998 and original test builds were circulated on IRC. The first Debian version that included it was Debian 2.1, released on 9 March 1999.[26]

In the end the original goal of the Deity project of replacing the dselect UI was a failure. Work on the user interface (UI) portion of the project was abandoned (the UI directories were removed from the CVS system) after the first public release of apt-get. The response to APT as a dselect method and a command line utility was so great and positive that all development efforts focused on maintaining and improving the tool. It was not until much later that several independent people built UIs on top of the capable libapt-pkg.

The final push of the first APT era was to build a complete dpkg replacement (libapt-inst). This project was also a failure, however the partial code found a use as part of the secretive 'Project Betsy' program, which resulted in the highly efficient apt-ftparchive and libapt python bindings. After this, the original author faded away and maintainership of APT languished.

Eventually, a new team picked up the project, began to build new features and released version 0.6 of APT which introduced the Secure APT feature, using strong cryptographic signing to authenticate the package repositories.[27]