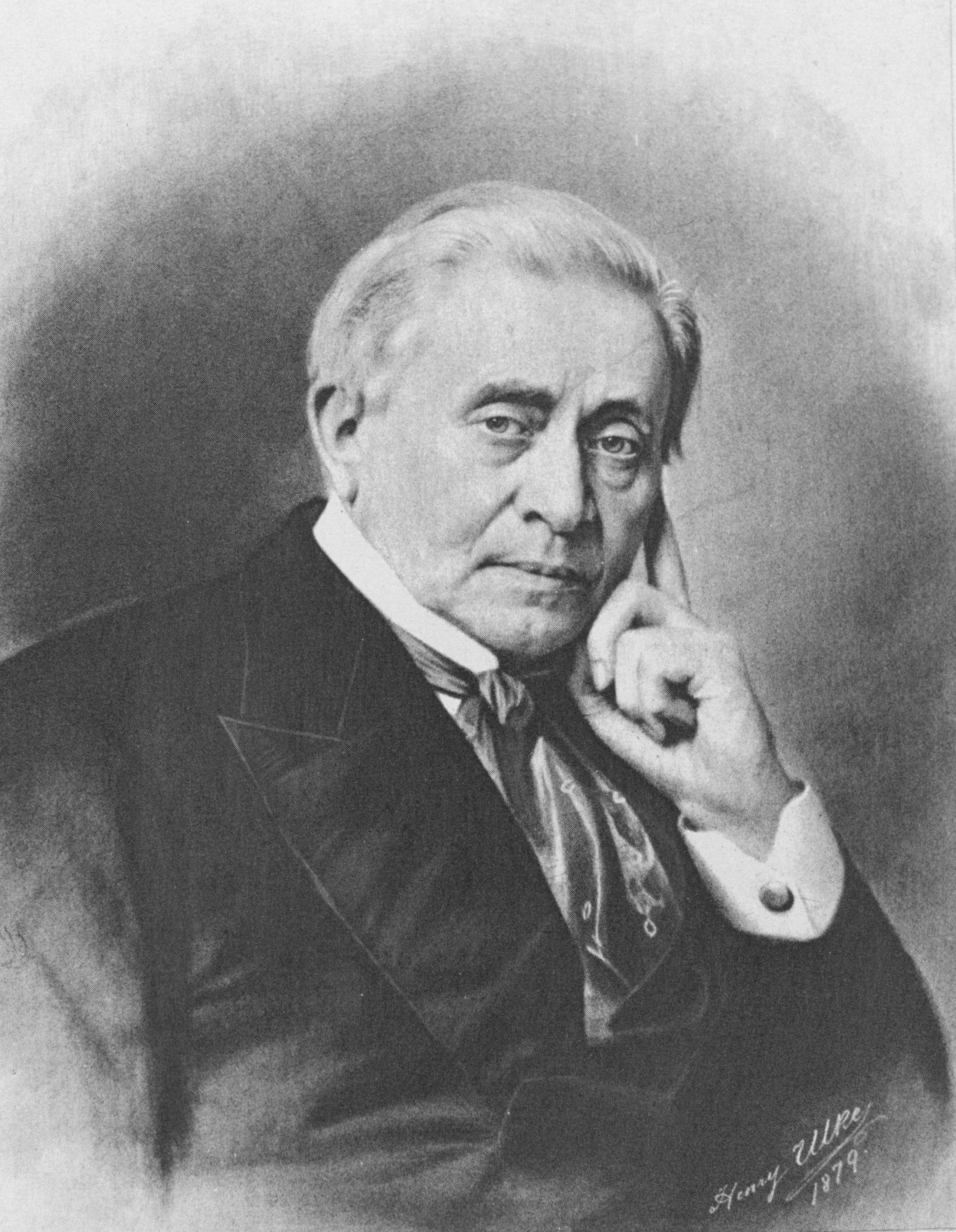 Joseph Henry ( &ndash; ) was an American scientist who served as the first Secretary of the . During his lifetime, he was considered one of the greatest American scientists since . While building electromagnets, Henry discovered the electromagnetic phenomenon of self-. He also discovered mutual inductance independently of , though Faraday was the first to publish his results. [cite book |last=Ulaby |first=Fawwaz |title=Fundamentals of Applied Electromagnetics |edition=2nd edition |date=2001-01-31 |publisher=Prentice Hall |id=ISBN 0-13-032931-2 |pages=p. 232] [cite web |url=http://www.nas.edu/history/members/henry.html |title=Joseph Henry |accessdate=2006-11-30 |work=Distinguished Members Gallery, National Academy of Sciences] Henry's work on the electromagnetic relay was the basis of the , jointly invented by and .

The unit of , the henry, is named after Henry, as are derivative units such as the millihenry and microhenry.

Henry was born on December 17th, 1797 in to two immigrants from , Ann Alexander Henry and William Henry. His parents were poor, and Henry's father died while he was still young. For the rest of his childhood, Henry lived with his grandmother in Galway, New York. He attended a school which would later be named in his honor. After school, he worked at a general store, and later, at the age of thirteen, he went to work as an apprentice and . Joseph’s first love was theater and he came very close to becoming a professional actor. His interest in science was sparked at the age of sixteen, by a book of lectures on scientific topics titled "Popular Lectures on Experimental Philosophy". In 1819, he entered , where he was given free tuition. He was so poor, even with free tuition, that he had to support himself with teaching and private tutoring positions. He intended to go into the field of medicine, but, in 1824, he was appointed an assistant engineer for the survey of the State road being constructed between the and . From then on, he was inspired to a career in civil or .

Henry excelled at his studies (so much so, that he would often be helping his teachers teach science) and, by 1826, he was appointed Professor of Mathematics and Natural Philosophy at by Principal . Some of his most important research was conducted in this new position. His curiosity about lead him to experiment with in general. He was the first to coil insulated wire tightly around an iron core in order to make an extremely powerful , improving on ’s electromagnet, which used loosely coiled uninsulated wire. Using this technique, he built the most powerful electromagnet at the time for Yale. He also showed that, when making an electromagnet using just two s attached to a battery, it is best to wind several coils of wire in parallel, but when using a set-up with multiple batteries, there should be only one single long coil. The latter made the telegraph feasible.

He took what he had learned a step further and, in 1831, created one of the first machines to use electromagnetism for motion. This was the earliest ancestor of modern DC motor. It did not make use of rotating motion, but was merely an electromagnet perched on a pole, rocking back and forth. The rocking motion was caused by one of the two leads on both ends of the magnet rocker touching one of the two battery cells, causing a polarity change, and rocking the opposite direction until the other two leads hit the other battery.

Here, Henry also discovered the property of self inductance. Around the same time, the British scientist discovered it as well and, being first to publish his results, became the officially recognized discoverer of the phenomenon.

Prof. Henry was introduced to Prof. Thaddeus Lowe, a balloonist from New Hampshire who had taken interest in the phenomena of lighter-than-air gases, and exploits into meteorology, in particular, the high winds which we call the today. It was Lowe's intent to make a transatlantic crossing via an enormous gas-inflated aerostat. Henry took a great interest in Lowe'sendeavors so much as to support and promote him among some of the more prominent scientists and institutions of the day.

In June 1860, Lowe had made a successful test flight with his gigantic balloon, first named the City of New York hence renamed The Great Western, flying from Philadelphia to Medford, New York. Lowe would not be able to attempt a transatlantic flight until late Spring of the next year. Henry convinced Lowe to take his balloon to a point more West and fly the balloon back to the eastern seaboard, an exercise that would keep his investors interested.

Lowe took several smaller balloons to Cincinnati in March 1861. On April 19, conditions were perfect enough for him to take off on a fateful flight that landed him in Confederate South Carolina. With the Southern States seceding from the union, and the onset of civil war, Lowe abandoned further attempts at a transatlantic crossing and, with Henry's endorsement, went to Washington to offer his services with use of balloons. Henry submitted a letter to the Secretary of War, Simon Cameron showing his endorsement:

::"DEAR SIR: In accordance with your request made to me orally on the morning of the 6th of June, I have examined the apparatus and witnessed the balloon experiments of Mr. Lowe, and have come to the following conclusions:"

::"1st. The balloon prepared by Mr. Lowe, inflated with ordinary street gas, will retain its charge for several days."

::"2d. In an inflated condition it can be towed by a few men along an ordinary road, or over fields, in ordinarily calm weather, from the places where it is galled to another, twenty or more miles distant."

::"3d. It can be let up into the air by means of a rope in a calm day to a height sufficient to observe the country for twenty miles around and more, according to the degree of clearness of the atmosphere. The ascent may also be made at night and the camp lights of the enemy observed."

::"4th. From experiments made here for the first time it is conclusively proved that telegrams can be sent with ease and certainty between the balloon and the quarters of the commanding officer."

::"5th. I feel assured, although I have not witnessed the experiment, that when the surface wind is from the east, as it was for several days last week, an observer in the balloon can be made to float nearly to the enemy's camp (as it is now situated to the west of us), or even to float over it, and then return eastward by rising to a higher elevation. This assumption is based on the fact that the upper strata of wind in this latitude is always flowing eastward. Mr. Lowe informs me, and I do not doubt his statement, that he will on any day which is favorable make an excursion of the kind above mentioned."

::"6th. From all the facts I have observed and the information I have gathered I am sure that important information may be obtained in regard to the topography of the country and to the position and movements of an enemy by means of the balloon now, and that Mr. Lowe is well qualified to render service in this way by the balloon now in his possession."

::"7th. The balloon which Mr. Lowe now has in Washington can only be inflated in a city where street gas is to be obtained. If an exploration is required at a point too distant for the transportation of the inflated balloon, an additional apparatus for the generation of hydrogen gas will be required. The necessity of generating the gas renders the use of the balloon more expensive, but this, where important results are required, is of comparatively small importance."

::"For these preliminary experiments, as you may recollect, a sum not to exceed $200 or $250 was to be appropriated, and in accordance with this Mr. Lowe has presented me with the inclosed statement of items, which I think are reasonable, since nothing is charged for labor and time of the aeronaut."

::"I have the honor to remain, very respectfully, your obedient servant,":::"JOSEPH HENRY,":::"Secretary Smithsonian Institution."

On Henry's recommendation Lowe went on to form the and served two years with the Army of the Potomac as a Civil War Aeronaut.

Over 150 years ago, Henry identified the phenomena we now call direct sound, early reflections, and reverberation. He demonstrated the early sound integration period and laid the ground work for further fundamental research on early reflections that was not followed up until the work at Gottingen University in the 1950-1960’s. He brought a robust scientific approach to the subject of acoustics – a subject which is plagued by misunderstanding and misinformation to this day.

Henry devised a simple experiment to demonstrate the integration of direct and early sound. A listener, standing in an open space 100 feet from a wall, claps his hands and hears an echo. He gradually approaches the wall, clapping, until no echo is perceived, at a distance of 30 feet – the “Henry Distance” – equating to an early sound integration time of 60 ms. [ [http://www.acousticdimensions.com/tools/pac/joseph_henry/pac_jh.htm An auralization of Henry's experiment] ]

As a famous scientist and director of the Smithsonian Institution, Henry received visits from other scientists and inventors who sought his advice. Henry was patient, kindly, self-controlled, and gently humorous. ["Alexander Graham Bell and the Conquest of Solitude", Robert V. Bruce, pages 139-140 ] One such visitor was Alexander Graham Bell who on March 1, 1875 carried a letter of introduction to Henry. Henry showed an interest in seeing Bell's experimental apparatus and Bell returned the following day. After the demonstration, Bell mentioned his untested theory on how to transmit human speech electrically by means of a "harp apparatus" which would have several steel reeds tuned to different frequencies to cover the voice spectrum. Henry said Bell had "the germ of a great invention". Henry advised Bell not to publish his ideas until he had perfected the invention. When Bell objected that he lacked the necessary knowledge, Henry firmly advised: "Get it!"

On June 25 1876, Bell's experimental telephone (using a different design) was demonstrated at the Centennial Exhibition in Philadelphia where Henry was one of the judges for electrical exhibits. On January 13, 1877 Bell demonstrated his instruments to Henry at the Smithsonian Institution and Henry invited Bell to show them again that night at the Washington Philosophical Society. Henry praised "the value and astonishing character of Mr. Bell's discovery and invention." [ "Alexander Graham Bell and the Conquest of Solitude", Robert V. Bruce, page 214 ]

Henry died on May 13, 1878 and was buried a few days later in Oak Hill Cemetery in northwest Washington, D.C.

* [http://www.siarchives.si.edu/history/jhp/jhenry.html The Joseph Henry Papers Project]
* [http://siarchives.si.edu/findingaids/FARU7001.htm Finding Aid to the Joseph Henry Collection]
* [http://www.pnas.org/cgi/reprint/58/1/1.pdf Biographical details] - "Proceedings of the National Academy of Sciences" (1967), 58(1), pages 1 - 10.
* [http://www.sil.si.edu/digitalcollections/HistoryCultureCollections/SIL7-154/pdf/SIL007-154.pdf Dedication ceremony for the Henry statue (1883)]
* [http://www.aip.org/history/gap/ Published physics papers] - "On the Production of Currents and Sparks of Electricity from Magnetism" and "On Electro-Dynamic Induction (extract)"