Media transparency
This article is about transparency in communications. For investigative website, see MediaTransparency. 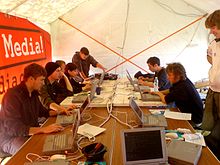 The inside of the media tent and the climate camp in Heathow. 10 workstations, with live satellite up-link and powered from renewables.

Media transparency is the concept of determining how and why information is conveyed through various means.

As used in the humanities,the topic of media transparency implies openness and accountability. It is a metaphorical extension of the meaning used a “transparent” object is one that can be seen through.

In communication studies, Media is transparent when:

Media transparency deals with the way the media is viewed to the public today and concerns why the media may portray something the way that it does. Media communication can be a very powerful tool in affecting change whether it is political or social. The various implications it has on the way issues are viewed within the government and to the public has a great affect on public policy change in the United States. Social media participation can be a key factor in whether or not something is accepted by the government. Transparency causes issues when there are many competing sources and they are possibly corrupt. The biased information can affect public policy if the government is tampering with the way the information is portrayed, in order to cast a positive or negative light on it. Depending on how transparent a news article is, one can determine its reliability and draw their own assumptions or draw their own conclusions from the findings.

The media’s pervasive influence can directly affect public opinion. It has been stated that “the only means of influencing what people think is precisely to control what they think about.” Agenda-setting relates to the process of policy change because “media content is pervasive and rife with explicit and implicit political meaning.” Beyond the role that agenda-setting can play in influencing public opinion, agenda building has to do with the mechanisms by which “social problems originate on the media agenda and how they are subsequently transformed into political issues.” The transparency with which information has been obtained alters our knowledge about the subject. The framing theory states that media influence issue agendas by portraying an issue as positive or negative; citizens will then be influenced by media to hold similar opinions. By discussing local issues in a positive manner, local media can garner support for issues. By blocking certain users, they defy transparency in media.

The media can play the role of a watchdog in some situations while in others it can be manipulated to reflect views of a particular group in power. Police forces are becoming increasingly proactive, strategic, and professionalized in their use of the news media. Willingly or not, it has long been recognized that the police and the media can be seen to be locked into a relationship that is, to some degree at least, premised on what has described as a ‘complex loop of interdependence.' The media depends on the police for the constant release of ‘crime and crash’ information as the lifeblood of their news stories; the police depend on media coverage for help in crime prevention and detection and also in the promotion of a positive image of policing work. Nevertheless, the effective management and use of information has an important role to play in crime prevention, reduction and investigation strategies, and the amount of information that police officers encounter in the course of their work is considerable.[1]

Biased information can affect public policy if the government tampers with the way information is portrayed in order to cast a positive or negative light on it. Depending on how transparent a news article is, one can determine its reliability and make assumptions or draw one’s own conclusions from the findings. Media transparency brings up issues concerning freedom of speech since the governments may censor what information is conveyed in order to sway public opinion. Corruption has been a major issue in the growth and progress of certain areas of the world, because there is a lack of media transparency.

Transparency, publicity, and accountability are all needed in order to produce change. Just making information available may not be enough to prevent corruption if such conditions for publicity and accountability, as education, media circulation and free and fair elections are weak.[1] Information should be reached by much of the common public if it is to catalyze change in the areas being exposed. It may be helpful to strengthen people’s capacity to act upon the information they receive through transparency, in order to increase its effectiveness.

In terms of governments, media transparency can be particularly important in allowing members of a particular country to see what is actually happening in a certain situation, without the story being manipulated. Abuse of power is very common in some countries and this can be directly related to a lack of media transparency. It is this absence of relevant knowledge of political and public affairs, of participation and accountability; an absence disguised by an overload of information on politically irrelevant or unenlightening matters.

In particular, mass media produce and use information to divert attention from important matters, to change or confuse the meanings of events, to turn public concerns into matters of entertainment. Far from focusing on matters of public interest in a way that respects that public interest, they increasingly blur the public-private line. They intrude into the private lives of public figures, pleading the public’s ‘right to know’. The result is 'a simulated transparency between governments and the governed.'

The government takes great care to be presented in a certain light by the media. For millennia leaders have known the importance of the visual image to their public relations persona. All manner of dress, ritual, and ceremony have been designed to shore up the perception of the powerful. From the very beginning of photojournalism, leaders saw an opportunity to groom their political image through their visual representations.

The degree to which state agents work to influence video production contradicts the use of those images by news organizations as indexical, objective representations. Because we so strongly equate seeing with knowing, video cultivates an inaccurate impression that we are getting the “full picture.” It has been said that “what is on the news depends on what can be shown.” The case studies for this project demonstrate that what can be shown is often decided in concern with political agents. Essentially, the way the media presents its information creates an illusion of transparency.[2]

Some organizations and networks insist that not only the ordinary information of interest to the community is made freely available, but that all (or nearly all) meta-levels of organizing and decision-making are themselves also published. This is known as radical transparency. These organizations include: Wikipedia, the GNU/Linux community, and Indymedia.

When an organization (corporate, government, non-profit, or other) holds a meeting and the proceedings are open to the public and the press, and the meeting is publicized via one or more of the following methods, there is less opportunity for the organization to abuse the system of information delivery in their own interest:

This assumes, of course, that the organization does not own or otherwise affect the media conveying the information.