A misdemeanor (also spelled misdemeanour) is a "lesser" criminal act in many common law legal systems. Misdemeanors are generally punished much less severely than felonies, but theoretically more so than administrative infractions (also known as minor, petty or summary offences) and regulatory offences. Many misdemeanors are punished with monetary fines.

Distinction between felonies and misdemeanors

In the United States, the federal government generally considers a crime punishable with incarceration for one year or less to be a misdemeanor.[1] All other crimes are considered felonies. Many states also employ this distinction.

A misdemeanor is considered a crime of low seriousness, and a felony one of high seriousness. A principal of the rationale for the degree punishment meted out is that the punishment should fit the crime.[2][3][4] One standard for measurement is the degree to which a crime affects others or society. Measurements of the degree of seriousness of a crime have been developed.[5]

The distinction between felonies and misdemeanors has been abolished by several other common law jurisdictions (e.g. Australia[6]). Those jurisdictions have generally adopted some other classification: in the Commonwealth nations of Australia, Canada, New Zealand, and the United Kingdom, the crimes are divided into summary offences and indictable offences. Ireland, a former member of the Commonwealth, also uses these divisions. 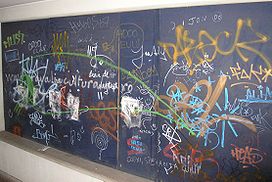 Graffiti, a common form of the misdemeanor vandalism.

In some jurisdictions, those who are convicted of a misdemeanor are known as misdemeanants (as contrasted with those convicted of a felony who are known as felons). Depending on the jurisdiction, examples of misdemeanors may include: petty theft, prostitution, public intoxication, simple assault, disorderly conduct, trespass, vandalism, drug possession, reckless driving, and other similar crimes.

In the United States, misdemeanors are typically crimes with a maximum punishment of 12 months of incarceration, typically in a local jail (again, as contrasted with felons, who are typically incarcerated in a prison). Jurisdictions such as Massachusetts are a notable exception where the maximum punishment of some misdemeanors is up to 2.5 years. Those people who are convicted of misdemeanors are often punished with probation, community service, short jail term, or part-time imprisonment; served on the weekends.

Misdemeanors usually do not result in the loss of civil rights (though in jurisdictions such as Massachusetts they commonly do), but may result in loss of privileges, such as professional licenses, public offices, or public employment. Such effects are known as the collateral consequences of criminal charges. This is more common when the misdemeanor is related to the privilege in question (such as the loss of a taxi driver's license after a conviction for reckless driving), or when the misdemeanor involves moral turpitude – and in general is evaluated on a case-by-case basis. One prominent example of this is found in the United States Constitution, which provides that the President may be impeached by Congress for "high crimes and misdemeanors" and removed from office accordingly. The definition of a "high crime" is left to the judgment of Congress.

In Singapore, misdemeanors generally are sentenced to months of jail sentence but with individual crimes suspects are sentenced to a harsher sentence. The penalty of vandalism is a fine not exceeding S$2,000 or imprisonment not exceeding three years, and also corporal punishment of not less than three strokes and not more than eight strokes of the cane.

Possession of cannabis is an unclassified misdemeanor in parts of the US.

Depending on the jurisdiction, several classes of misdemeanors may exist; the forms of punishment can vary widely between those classes. For example, the federal and state governments in the United States divide misdemeanors into several classes, with certain classes punishable by jail time and others carrying only a fine.[7]

When a statute does not specify the class, it is referred to as an unclassified misdemeanor. Legislators usually enact such laws when they wish to impose penalties that fall outside the framework specified by each class. For instance, Virginia has four classes of misdemeanors, with Class 1 and Class 2 misdemeanors being punishable by twelve-month and six-month jail sentences, respectively, and Class 3 and Class 4 misdemeanors being non-jail offenses payable by fines. As first-time cannabis possession is an unclassified misdemeanor in that state, state lawmakers have made it punishable by up to 30 days in jail rather than the normal fines and jail sentences of the four classes.[8][9]

A person prosecuted for misdemeanour was called a defendant.[10]