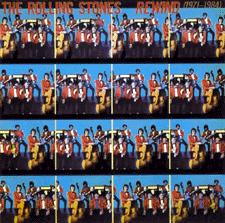 "Rewind (1971–1984)" is a by and was released in 1984. Coming only three years after "", the album was primarily compiled to mark the end of the band's worldwide alliance with EMI (and in ), both of whom were the distributors of . In July 1983, before "Undercover"'s release, The Rolling Stones had signed a worldwide multi-million dollar contract with CBS Records, with the first album being due in 1986. It is the second Rolling Stones album to include a lyric sheet (after 1978's ) .

For the first time since 1969's "", the UK and US editions of "Rewind (1971–1984)" would each feature altered track listings, reflecting the individual tastes of both territories.

Released in the summer of 1984, "Rewind (1971–1984)" was not as successful as previous compilations (due, in no small part, to the track repetitions from previous retrospectives), reaching #23 in the UK and #86 in the US, though it went gold there.

All songs by Mick Jagger and Keith Richards.