Sharpening stones, water stones or whetstones are used to grind and hone the edges of steel tools and implements. Examples of items that may be sharpened with a sharpening stone include scissors, scythes, knives, razors and tools such as chisels, hand scrapers and plane blades. Though it is sometimes mistaken as a reference to the water often used to lubricate such stones, the word "whetstone" is a compound word formed with the word "whet," which means to sharpen a blade, not the word "wet". The process of using a sharpening stone is called stoning.

Sharpening stones come in a wide range of shapes, sizes and material compositions. Stones may be flat, for working flat edges, or shaped for more complex edges, such as those associated with some wood carving or woodturning tools. They may be composed of natural quarried material, or from man-made material.

Stones are usually available in various grades, which refers to the grit size of the particles in the stone. Generally, the finer the grit, the denser the material, which leads to a finer finish of the surface of the tool. Finer grits cut slower because they remove less material. Grits are often given as a number, which indicates the density of the particles with a higher number denoting higher density and therefore smaller particles.

Natural stones are less common than they used to be. Historical demand has exhausted most known natural quarries and little effort has gone into discovering new ones due to and since the concurrent rise of gunpowder and industrial chemistry: the one obviating the military importance of whetstones, and the other allowing for the mass production of artificial ones.

As a result, the legendary Honyama mines in Kyoto, Japan, have been closed since 1967. Belgium currently has only a single mine that is still quarrying Coticules and their Belgian Blue Whetstone counterparts. This scarcity causes high prices for a good quality natural stone. Lower quality natural stones have problems with consistent grain sizes, low abrasive particle content leading to "slow" sharpening, inconsistency in hardness, inclusions of large foreign particles of other stone materials, and cracks and other such natural imperfections.

Modern synthetic stones are generally of equal quality to natural stones, and are often considered superior in sharpening performance due to consistency of particle size and control over the properties of the stones. For example, the proportional content of abrasive particles as opposed to base or "binder" materials can be controlled to make the stone cut faster or slower, as desired.[1] Natural stones are often prized for their natural beauty as stones and their rarity, adding value as collectors' items. Furthermore, each natural stone is different, and there are rare natural stones that contain abrasive particles in grit sizes finer than are currently available in artificial stones.

Japanese sword polishing, particularly in the finishing stages, is still most commonly performed with extremely costly and rare natural polishing stones, as the inconsistent grit sizes of the abrasive particles in natural stones will often produce visual results of polishing that reveal characteristics of the steel that the uniform grain particles in artificial stone will not.[citation needed] Some Japanese waterstones are known to reach 50,000+, 75,000+, or even 120,000+ grit in abrasive particle size, while the finest artificial stone sold is the Shapton 30,000 grit stone (though diamond abrasive particles of several hundred thousand grit are available, typically as a suspended liquid or drypowder).

One of the most revered natural whetstones is the yellow-gray "Belgian Coticule," which has been legendary for the edge it can give to blades since Roman times, and has been quarried for centuries from the Ardennes. The slightly coarser and more plentiful "Belgian Blue" whetstone is found naturally with the yellow coticule in adjacent strata; hence two-sided whetstones are available, with a naturally occurring seam between the yellow and blue layers. These are highly prized for their natural elegance and beauty, as well as for providing both a fast-cutting surface for establishing a bevel and a higher-grit surface for refining it. Amongst straight razor users, this stone is considered one of the finest.

The hard stone of Charnwood Forest has been quarried for centuries,[2] and was a source of whetstones and quern-stones.

Whetstones may be natural or artificial stones. Artificial stones usually come in the form of a bonded abrasive composed of a ceramic such as silicon carbide (carborundum) or of aluminium oxide (corundum). Bonded abrasives provide a faster cutting action than natural stones. They are commonly available as a double-sided block with a coarse grit on one side and a fine grit on the other enabling one stone to satisfy the basic requirements of sharpening. Some shapes are designed for specific purposes such as sharpening scythes, drills or serrations.

When the block is intended for installation on a bench it is called a bench stone. Small, portable stones (commonly made of bonded abrasive) are called pocket stones. Being smaller, they are more portable than bench stones but present difficulty in maintaining a consistent angle and pressure when drawing the stone along larger blades. However, they still can form a good edge. Frequently, fine grained pocket stones are used for honing, especially "in the field". Despite being a homophone with wet, whetstones need not be lubricated with oil nor water, although it is very common that either is used. Lubrication aids the cutting action and carries swarf away.

Finer grades of whetstones intended for use with oil (though, again, water may also be used) are called oilstones. Oilstones usually come in the form of bench stones. One of the natural minerals commonly used in oilstones is Novaculite. Examples of stones made from this material include Arkansas, Ouachita or Washita stones from the Ouachita Mountains in Arkansas. These come in various grades and colors, with the finer stones being denominated "surgical black" or "pink translucent". Novaculite is from the Devonian and Mississippian periods. It is a sedimentary rock composed mostly of microcrystalline quartz and is basically a recrystallized variety of chert. It is also the primary material in Charnley Forest and Turkey oilstones.

Abrasive stones are made by sintering powder metal,ceramics and clay just below their melting points. 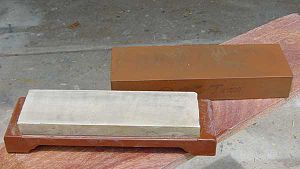 The Japanese traditionally used sharpening stones lubricated with water (using oil on a waterstone reduces its effectiveness). They have been doing this for many hundreds of years, and the first stones were naturally occurring. The geology of Japan provided a type of stone which consists of fine silicate particles in a clay matrix. This is somewhat softer than Novaculite.

Japanese stones are also sedimentary. The most famous are typically mined in the Narutaki District just north of Kyoto.

These softer Japanese stones have a few advantages over harder stones. First, because they are softer they do not become glazed or loaded with the material they are sharpening. New particles are constantly exposed as you work with them and thus they continue to cut consistently. Second, they can be lubricated effectively with water (rather than oil, which can ruin the stone) so nothing but water is required. Finally, because they are soft, the worn material and the water form a slurry that in conjunction with the stone, sharpens and polishes the blade.

A disadvantage is that they become uneven faster than other types of sharpening stone, although at the same time this makes them easier to flatten.

Historically, there are three broad grades of Japanese sharpening stones: the ara-to, or "rough stone", the naka-to or "middle/medium stone" and the shiage-to or "finishing stone". There is a fourth type of stone, the nagura, which is not used directly. Rather, it is used to form a cutting slurry on the shiage-to, which is often too hard to create the necessary slurry. Converting these names to absolute grit size is difficult as the classes are broad and natural stones have no inherent "grit number". As an indication, ara-to is probably (using a non-Japanese system of grading grit size) 500–1000 grit. The naka-to is probably 3000–5000 grit and the shiage-to is likely 7000–10000 grit. Current synthetic grit values range from extremely coarse, such as 120 grit, through extremely fine, such as 30,000 grit (less than half a micron abrasive particle size). 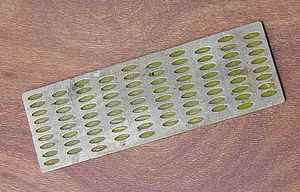 A diamond plate is a steel plate sometimes with a plastic or resin base. The plate is coated with diamond grit, an abrasive that will grind metal. The plate may have a series of holes cut in it that capture the swarf cast off as grinding takes place. Diamond plates can serve two purposes: they can be used as a stand-alone alternative to stones for sharpening steel edge tools; and they can also be used for maintaining the flatness of man-made waterstones, which can become grooved or hollowed in use. Flattening deformed waterstones is considered essential to the sharpening process. Diamond plates can be used to flatten these stones and are considered an alternative to more traditional methods.

Diamond plates are available in various plate sizes (from credit card to bench plate size) and grades of grit. A coarser grit is used to remove larger amounts of metal more rapidly, such as when forming an edge or restoring a damaged edge. A finer grit is used to remove the scratches of larger grits and to refine an edge. Two-sided plates exist where each side is covered in a different grit.

Unlike stones that can become rounded, which decreases their effectiveness, diamond plates remain flat. They do not require the use of a lubricant.

Diamond plates, being made from diamond — even though of industrial grade — tend to be more expensive than synthetic whetstones. They are also not capable of refining an edge as well or to as great an extent as synthetic or natural whetstones.