Somebody in the Snow

Somebody in the Snow

Infobox Album
Name = Somebody in the Snow
Type =
Artist = 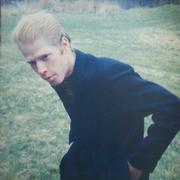 "Somebody in the Snow" is the nineteenth album by and his only release of (1990). released as Corwood #0757, the album is a curious mixture of more "blues-lounge" band tracks with female vocals, some acoustic and drums tracks and a few of the strangest songs to ever find home on a Jandek album.

When "Somebody in the Snow" came out many assumed that this was the end. This was due to the legend (and nobody has ever been sure where the rumor came from) that there were 19 Jandek albums, all of which were recorded in one crazed series of sessions. When the last album came out, that was it. Curiously, this would be the first of many times people would declare an album "the last" ("Lost Cause", "the Beginning" and "The End of it All" are three other mistaken candidates). Had this been the last album, it would have been an interesting place to leave off, though the last song, "Walking Home" (which echoes "Walking Around," a song that began the original second side) does have a sense of finality about it, as the artist sings "sit back, and it's easy" over drums and strummed guitar.

One thing was final about this album - the "blues rock" sound that began with seems to implode about halfway through the record, and something new, loungey, and more than a bit strange takes over. The man in charge is certainly the same guy who recorded "You Painted Your Teeth," but "OM" and "Bring it in a Manger" are something else entirely. The former finds several voices (hard to say how many overdubbed) chanting "OM" as though they were holding a meditation session at an acid test. The female singer laughs at the end, but it's impossible to tell if this song is meant to be humorous (see "Mother's Day Card" from ) or enchanting. "Bring it in a Manger" is a quasi-religious oddity with strange instrumentation that includes the lines, "She wasn’t dead, just wasted/said I’ll find a true eagle some day/give him my genitals in a paper cup/give him my soul and rainbow," before ending with "Take a god from his list/push it through these legs/bring it in a manger."

After this the more "standard" guitars that have been the norm on the last few albums go away, and the familiar uniquely tuned pick of the Corwood acoustic guitar is heard. There's shambling drums in the background of "Sense of Reason," and the vocalist sounds ghostlier, and a little more tense, than he has in a while. This leads through a side of these numbers, with a few more oddities thrown in. "Stick with Me" once led many to tag Jandek as gay, since it includes lines like "Don't leave me, Stevie," with the narrator threatening to "fall in love with my friend." Mostly, it seems like he likes rhyming "Leavin'" with "Stephen." Then there's "You Sing a Song," a manic rant for drums, harmonica and wild vocals before the album eases out. A curiosity in a most curious catalog, the album has found more favor with critics and fans through the years. And it is does feature some significant progressions in capturing a band sound particularly on the first three tracks, where the Corwood Representative duets with the female vocalist over music that would make proud.

As lush as untuned guitars recorded on a 4-track can get (closer than you think)... Jandek’s muse continues to progress.