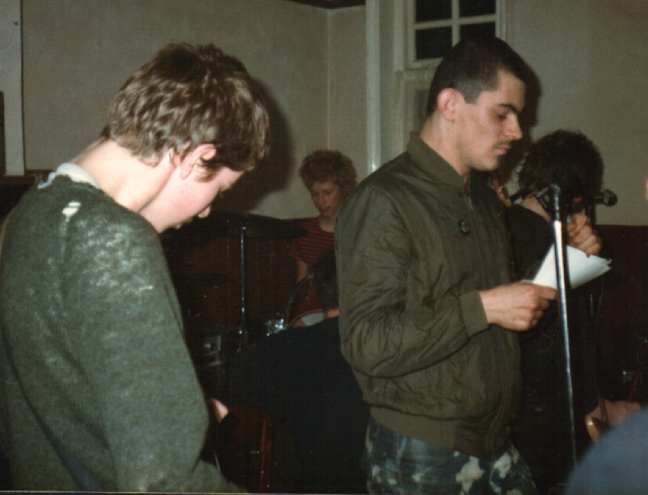 The Apostles are an experimental punk rock band who developed within the confines of the 1980s scene in the UK, but did not necessarily adhere to the aesthetics of that movement.

The Apostles were formed in the area of London in 1979 by , Julian Portinari, Dan McIntyre and Pete Byng-Hall. This line-up of the group did not play any concerts, and only appeared in a small number of fanzines (including "Paroxysm Fear" and "New Crimes") before Bill Corbett left the group.

The music of the group is generally characterized by a varied eclecticism which encompasses punk, Blues Rock, Industrial music (with influences like , and cited), and more abstracted avant garde experimentation.

The remaining founder members of the group left the group in early 1982. Martin recruited Dave Fanning (ex-Innocent Bystander) as bassplayer, along with a revolving line-up of musicians (which included John Soares, Kev Apostle, Flump, (ex-Political Asylum) and Olly Bucket (Eat Shit) ) in order to continue the group who went on to play numerous concerts in the London area, and to record 8 demo cassettes and 4 7" singles between 1982 and 1984.

Andy Martin and Dave Fanning were joined in 1984 by (later of Hellbastard, Sidewinder, Nero Circus and Heavy Water) and drummer Chris Wiltshire which created a line-up which remained relatively stable (with the addition of Sean Stokes and Colin Murrell) until the groups demise at the end of the 1980's. The group recorded over 10 demo cassettes, 4 7" singles and 7 12" LP's between mid-1984 and 1990. Original guitarist Pete Bynghall re-joined the group in late 1988 for their last recordings and final concert (cf Live At The Academy).

Always highly critical of the seemingly inward looking movement of the times, the autonomous and extreme approach of The Apostles seemed to portray classic anarchism, as opposed to the conformity of many of their contemporaries, This led the group receiving respect from notable members of the anarcho-punk movement such as Conflict, who released three records by The Apostles, and with whom the band co-operated with during the squatting of the Zig-Zag Club and during the time in which the The Autonomy Centre and Centro Iberico anarchist venues operated. Both Martin and Fanning worked during this period at the Little @ printers - an anarchist printers located in the same building as the Autonomy Centre in Wapping. The anti-communist and anti-gay lyrics of 'Rock Against Communism' and 'Kill or Cure' on the 'Giving of Loving Costs Nothing' ep and other similarly themed later songs opened the group to charges of fascisim and homophobia. Whilst this material was intended to expose the supine attitudes of those within the 'anarcho punk' milieu who did not challenge such blatantly provocative sentiments (a tactic which Andy Martin had used since his entrance to the group), they undermined the coherence of the band's ideology, leading , in his book "Cranked Up Really High", to describe The Apostles as "locked into...a stasis if not actual paralysis". During the time the band was together Andy Martin began to write about his homosexuality and the subject in general which alienated many of their former fans but did not deter Martin. In 1989, Andy and Dave did an interview with "" fanzine which addressed this issue¹. Among their many recordings released, The Apostles contributed the song "Forbidden Love" to the first compilation, "JD.s Top Ten Homocore Hits", released by "" in 1990.

The Apostles split as a group in 1990, immediately forming which also included Nathan Coles (of The Unbelievables) and Lawrence Burton (formerly of ). The group collaborated with the industrial band on two songs, "Terror Chamber" and "Terror Intensifies", both featured on compilations.

were later renamed in 1994 as Unit who continue to record and perform to this day.

Chart placings shown are from the .

The Joy Of Living were a female folk/punk band who released 1 cassette demo in addition to the above recording.

Several early Apostles tracks are featured on the Cause For Concern compilation . An excellent sampler of the early 80s post-Punk Industrial music scene, it also features contributions from ,, , , and ex- members .