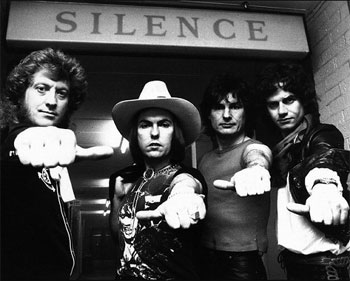 Slade are an English band. Slade were one of the most recognizable acts of the glam rock movement and were, at their peak, the most commercially popular band in the UK. They are well known for the of their song titles and for the song "" (released December 1973), now one of the most iconic pop songs in the .

Slade are from in the West Midlands. Drummer and bass guitarist were both born and raised there, while lead guitarist was born in Devon and moved to Wolverhampton as a child. Lead singer was born and raised in the nearby town of . In writings by and about Slade, the Trumpet public house in is mentioned frequently as a band meeting place, especially in their early days.

One of the most acclaimed British Rock bands of the 1970s, Slade are especially remembered for their brash songwriting and energetic live performances. Today, the band is often regarded as a pre-cursor to late 1970s British Punk (, ).

The group dominated the British charts during the early 1970s. During the height of their success, Slade out-performed their chart rivals, such as , Sweet, T.Rex, , Mud, Smokie, , and . In the UK, they achieved 12 top five hits from 1971 to 1974, six of which topped the charts. In total, Slade had 17 top 20 hits between 1971 and 1976 including six #1s, three #2s and two #3s. No other UK act of the period enjoyed such consistency in the UK and Slade actually came the closest to emulating ' 22 top ten records in a single decade (1960s). Three of their singles entered the charts at #1 and they sold more singles in the UK than any other group of the 1970s.

While Slade's attempts at cracking the market were largely unsuccessful, they left their mark on several US bands who cite Slade as an influence. Kiss bassist readily admits that his band's early songwriting ethos and stage performance style was influenced by Slade. In his book "Kiss and Make-Up," Simmons writes on page 85, "the one we kept returning to was Slade," and "we liked the way they connected with the crowd, and the way they wrote anthems... we wanted that same energy, that same irresistible simplicity. but we wanted it American-style." of has said that his band went to see Slade perform, and that they used "every cheap trick in the book", thus inadvertently coining his group's name. had a U.S. hit with their cover of "."

The original band's memory was kept alive by comedians and , who respectfully sent up the band in a number of what the band called 'hysterically accurate' 'Slade in residence' and 'Slade on holiday' sketches in their "" TV show in the early 1990s - these are available on DVD.

It has been said that and based their fictional band , in the "", on Slade. However, the comedians have since confirmed that the band in the film was based on the "tour diaries" of numerous UK "heavy metal" and "glam" bands. The events occurring to in the film are based on the real exploits of not only Slade but also , Saxon, and .

The band started out as the N'Betweens in 1966 with Noddy Holder and amongst others were Tony Taylor (aka Big T), formed from members of two Midlands bands, The Vendors and Steve Brett & The Mavericks. They initially had little success, apart from on the local club circuit, where they were extremely busy and in the late 1960s the band changed its name to Ambrose Slade and hooked up with manager . Their name was eventually shortened to Slade, and the band adopted a look, as an attempt to gain publicity from what was a newsworthy youth fashion trend. They later abandoned this look, due to the unwelcome association with . They grew their hair long again, in time to become a leading part of the movement, releasing songs with deliberately -style mis-spelled titles which made them stand out.

From 1971 to 1975, the band scored many huge-selling consecutive hit albums and singles. Their most noted Christmas anthem has resurfaced seasonally and formed one of a successions of singles that entered the charts at number one - a feat unheard of since the days of . After dominating the chart in 1973, 1974 saw a slight change in musical direction for the band. The soundtrack album to their only film, "" (1974) contained a more mature sound and perhaps remains to this day their most influential album, with clever use of brass and piano, somewhat fore-running bands such as the Jam and Oasis. Their concerts were all automatic sell-outs, and the band was the first to take the risk of booking the massive in for a couple of nights (although promptly booked the venue for a couple of dates before Slade were due to perform). Following the ground-breaking shows, Don Powell was critically injured in a car crash and with his life in danger, the band's future was left in the balance. Powell eventually recovered, although he still suffers with acute short-term memory and sensory problems.

The band reputedly turned down the chance to represent the UK at the .

Partly due to changes in music trends and the advent of and , Slade's success faded somewhat by the late 1970s, although the group continued to release records and punk bands were not afraid to cite them as an influence.

In August 1980, 's Blizzard Of Ozz cancelled their set at the Reading Festival with very short notice. Slade, who had all but disbanded, were recommended to replace them. A demoralised Dave Hill had effectively left the band and initially refused to do the show when asked by the other band members, but manager convinced Hill to play what could very well have been their last ever live show in front of a huge crowd rather than in a small club. To Hill's utter astonishment, the band were well-received at the festival (highlights of their performance were also broadcast on 's Reading special), and quickly became darlings of the music press again — despite doing nothing at all differently at Reading than they had done onstage in recent years.

A new run of chart success followed, though not on the large scale of their 1970s heights. In 1980, the heavy rocking "We'll Bring the House Down" reached #10 in The UK, and an album of the same name got to #25. Holder and Lea became in-demand for production and songwriting duties for other acts for a while, including . Slade had two UK top 10 hits in 1984, with "My Oh My" (#2) and "Run Runaway" (#7). These singles also reached the US top-40, with "Run Runaway" peaking at #20. Interestingly enough, these hits happened despite Slade not touring to support the releases. A year after the triumph of "My Oh My", the band reached the UK top-20 with "All Join Hands", another vaguely Christmas-styled song.

They later returned to the in 1991 with the song "Radio Wall of Sound".

Holder became weary of constant touring, effectively managing the band and of the music business and left the band in late 1991 after 25 years. The remainder of the band were given a period of notice in which to consider their options. Rather than take on another singer, Lea effectively retired from live work, preferring to work quietly, at his own pace, alone in the studio.

Lea had released a solitary low-profile solo single under his own name and three others, plus an album as The Dummies, during the latter years of his tenure with Slade. After Slade split, Lea remained resolutely silent, save for the rather sporadic release of a few singles under pseudonyms such as The Clout, Greenfields Of Tong and also as Whild.

In 2007, however, he finally released an album of mainly unheard new original material, credited with his full name, James Whild Lea, entitled "Therapy". He has recently said that he has amassed a large number of finished recordings that could be made available in the near future. Lea has no plans to tour to promote future releases, which are available via his own internet retail outlet.

Powell and Hill (the band's founder members) formed Slade II with three other local musicians at that point. The suggestion to call the group Slade II came from Noddy Holder. The group name was once again shortened to "Slade" after a period and over the years a number of new members have come and gone with only Hill and Powell remaining constant throughout. The group work solidly on the UK theatre circuit in the winter months and throughout Europe during the rest of the year. They have released one album, which has been retitled a number of times and a few singles in Europe.

Slade's track "Give Us A Goal" is currently being used in the FIFA'09 television ad.

"Slade was certainly our greatest influence; not only in the crafting of rock songs but also as performers. Before Slade, no one really knew shit about how to make an audience riot. We really got off on that. There would probably never have been us without them." - (Kiss)

"I spent most of the early 70s listening to "" thinking to myself, "Wow - this is what I want to do. I want to make that kind of intensity for myself. A couple of years later I was at CBGB's doing my best ." - ()

"Slade never compromised. We always had the feeling that they were on our side. I don't know but I think we were right." - Steve Jones ()

"I couldn't do the heavy rock thing anymore. Noddy Holder was around kicking every singer in the ass . I never wanted to be a pop singer. Christ, how I hated Noddy!" - Tom JonesFact|date=August 2008

"Slade was the coolest band in England. They were the kind of guys that would push your car out of a ditch." -

"Slade was never pretentious. It was just music to them. Pop, rock, soul....it was all the same to Slade. They wrote great songs. And, besides, I'd like to raid their wardrobe." - (Oasis)

"The whole punk rock thing really happened because of bands such as Slade and the like; rock bands that wouldn't back off." - Paul Weller (/)

"Absolutely. Slade! A band that would never bend over." - (Nirvana)

"Slade was pretty much the only thing metal about glam rock in the 70s." - () Ironically, Slade would replace Mötley Crüe as the opening act for .

"Whatever happened to bands that rocked liked Slade? Y'know, that no-bullshit, fuck you, in your face, we're bad-as-hell-and-we-know-it kind of band?" - ()

"All right? You look like Dave Hill from Slade"- , referring to his girlfriend's abysmal haircut, on the , & XFM Radio show, 08 November 2003 (transcript [http://www.pilkipedia.co.uk/wiki/index.php?title=08_November_2003/Transcript] )