For his career, McGwire averaged a home run once every 10.61 at bats, the lowest at bats per home run ratio in baseball history (Babe Ruth is second at 11.76).[2] In 1987, he broke the single-season home run record for rookies, with 49. In 1998, McGwire and Sammy Sosa achieved national fame for their home run-hitting prowess in pursuit of Roger Maris' single season home run record; McGwire broke the record and hit 70 home runs that year.[3] Barry Bonds[4] now holds the record, after hitting 73 home runs during the 2001 season.

After three years at Southern California and a stint on the 1984 U.S. Olympic team, McGwire was drafted 10th overall by the Oakland Athletics in the 1984 Major League Baseball Draft.

McGwire made the major leagues in August 1986. As a rookie in 1987 he hit 33 homers before the All-Star break and was a unanimous choice for AL Rookie of the Year after finishing with 49 homers, 118 RBIs and a .289 average. His 49 longballs smashed the old rookie record of 38, jointly held by Frank Robinson and Wally Berger. He sat out the season's final two games and gave up a chance at 50 home runs to be present at the birth of his first child.

McGwire worked hard on his defense at first base and resisted being seen as a one-dimensional player. He was regarded as a good fielder in his early years, even winning a Gold Glove in 1990. In later years, his mobility declined and, with it, his defense.

McGwire's total of 363 home runs with the Athletics is that franchise's record. He was selected or voted to nine American League All-Star Teams while playing for the A's, including six consecutive appearances from 1987 through 1992. He was one of only four players to hit a ball over the roof in the left field of Tiger Stadium.[5]

In his first full Major League season in 1987, McGwire hit 49 home runs, a single-season record for a rookie, surpassing Al Rosen's AL rookie record;[6] he was named the American League Rookie of the Year. McGwire hit 32, 33, and 39 homers the next three seasons, the first Major Leaguer to hit 30+ home runs in each of his first 4 full seasons.[1] On July 3 and 4, 1988, McGwire hit game-winning home runs in the 16th inning of each game.[7][8] Through May 2009 McGwire was tied for third all-time with Joe DiMaggio in home runs over his first two calendar years in the major leagues (71), behind Chuck Klein (83) and Ryan Braun (79).[9]

But McGwire's most famous home run with the A's was likely his game-winning solo shot in the bottom of the ninth inning of Game 3 of the 1988 World Series against the Los Angeles Dodgers and former A's closer Jay Howell.[10] McGwire's game-winner brought the A's their only victory in the 1988 World Series, which they lost in five games. However, Big Mac and his fellow Bash Brother José Canseco did play a large part in the 1989 World Champion A's team that defeated the San Francisco Giants in the famous "Earthquake Series".[11]

McGwire's batting average, .289 as a rookie, plummeted over the next three seasons to .260, .231, and .235, respectively. In 1991, he bottomed out with a .201 average and 22 homers. Manager Tony LaRussa sat him out the last game of the season so his average could not dip below .200. Despite the declining batting averages during this time of his career, his high bases on balls totals allowed him to maintain acceptable on-base percentages. In fact, when he hit .201, his adjusted OPS (OPS+) was 103, or just over league average.

McGwire stated in an interview with Sports Illustrated that 1991 was the "worst year" of his life, with his on-field performance and marriage difficulties, and that he "didn't lift a weight" that entire season. With all that behind him, McGwire re-dedicated himself to working out harder than ever and received visual therapy from a sports vision specialist.[12][13]

He changed his clean-cut look and grew a mullet, a mustache, and a goatee to look more fearsome. The "new look" McGwire hit 42 homers and batted .268 in 1992, with an outstanding OPS+ of 175 (the highest of his career to that point), and put on a home run hitting show at the Home Run Derby during the 1992 All-Star break. His performance propelled the A's to the American League West Division title in 1992, their fourth in five seasons. The A's lost in the playoffs to the eventual World Series champion, the Toronto Blue Jays.

Foot injuries limited McGwire to a total of 74 games in 1993 and 1994, and just 9 home runs in each of the two seasons. He played just 104 games in 1995, but his proportional totals were much improved: 39 home runs in 317 at-bats. In 1996, McGwire belted a major league leading 52 homers in 423 at-bats. He also hit a career high .312 average, and led the league in both slugging percentage and on base percentage. 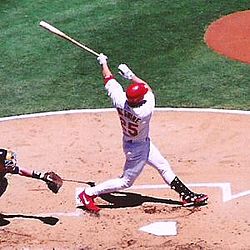 McGwire batting for the Cardinals.

On July 31, having already amassed 34 home runs to this point in the 1997 season, McGwire was traded from the Oakland Athletics to the St. Louis Cardinals. He led the majors with 58 home runs in 1997. In the last year of his contract, there was speculation that McGwire would play for the Cardinals only for the remainder of the season, then seek a long-term deal, possibly in Southern California, where he still lives. However, McGwire signed a contract to stay in St. Louis instead. It is also believed that McGwire later encouraged Jim Edmonds, another Southern California resident who was traded to St. Louis, to forgo free agency and sign a contract with the Cardinals in 2000.

As the 1998 season progressed, it became clear that McGwire, Ken Griffey Jr., and Chicago Cubs outfielder Sammy Sosa were all on track to break Roger Maris' single-season home run record. The race to break the record first attracted media attention as the home run leader changed often throughout the season. On August 19, Sosa hit his 48th home run to move ahead of McGwire. However, later that day McGwire hit his 48th and 49th home runs to regain the lead.

On September 8, 1998 at 8:18 p.m. CDT, McGwire hit a pitch by the Cubs' Steve Trachsel over the left field wall for his record-breaking 62nd home run, setting off huge celebrations at Busch Stadium. The fact that the game was against the Cubs meant that Sosa was able to congratulate McGwire personally on his achievement. Members of Roger Maris' family were also present at the game. The ball was freely given to McGwire in a ceremony on the field by the stadium worker who found it.

McGwire finished the 1998 season with 70 home runs (including five in his last three games), four ahead of Sosa's 66, a record that was broken three seasons later in 2001 by Barry Bonds with 73.

McGwire was honored with the inaugural Babe Ruth Home Run Award for leading MLB in home runs.[14] Although McGwire had the prestige of the home run record, Sammy Sosa (who had fewer HR but more RBI and stolen bases) won the 1998 NL MVP award, as his contributions helped propel the Cubs to the playoffs (the Cardinals in 1998 finished third in the NL Central). Many credited the Sosa-McGwire home run chase in 1998 with "saving baseball," by both bringing in new, younger fans and bringing back old fans soured by the 1994 Major League Baseball strike.

In 1999, McGwire hit 65 home runs and drove in a league-leading 147 runs while only having 145 hits, the highest RBI-per-hit tally for a season in baseball history. Sammy Sosa, hitting 63 home runs, again closely trailed McGwire.

On January 7, 2010 Tony LaRussa mentioned that he might consider putting McGwire in the lineup as a pinch-hitter on August 31, should the Cardinals be in contention to make the playoffs, but LaRussa admitted it was a dream and he was only kidding.[16]

McGwire received a standing ovation prior to the Cardinals home opener on April 12, 2010.[17]

In 1999, The Sporting News released a list of the 100 Greatest Baseball Players. The list had been compiled during the 1998 season and included statistics through the 1997 season. McGwire was ranked at Number 91. That year, he was elected to the Major League Baseball All-Century Team (though he received fewer votes than any other selected player). In 2005, The Sporting News published an update of their list and McGwire had been moved up to Number 84.

In 2005, McGwire and Canseco were among 11 baseball players and executives subpoenaed to testify at a congressional hearing on steroids. During his testimony on March 17, 2005, McGwire declined to answer questions under oath when he appeared before the House Government Reform Committee.

On January 11, 2010, McGwire admitted to using steroids on and off for a decade and said, "I wish I had never touched steroids. It was foolish and it was a mistake. I truly apologize. Looking back, I wish I had never played during the steroid era."[19] He admitted using them in the 1989/90 offseason and then after he was injured in 1993. He admitted using them on occasion throughout the '90s, including during the 1998 season. McGwire stated that he used steroids to recover from injuries.[20]

McGwire's decision to admit using steroids was prompted by his decision to become hitting coach of the St. Louis Cardinals. According to McGwire, he took steroids for health reasons rather than to improve performance.[21]

McGwire was born in Pomona, California. He attended Damien High School in La Verne, California, where he started playing baseball, golf, and basketball. He played college baseball at the University of Southern California under coach Rod Dedeaux.

His brother Dan McGwire was a quarterback for the Seattle Seahawks and Miami Dolphins of the NFL in the early 1990s, and was a first-round draft choice out of San Diego State University.

McGwire married Stephanie Slemer – a former pharmaceutical sales representative from the St. Louis area – in Las Vegas on April 20, 2002. On June 1, 2010, their triplet girls were born: Monet Rose, Marlo Rose, and Monroe Rose. They join brothers Max and Mason. They reside in a gated community in Shady Canyon Irvine, California.[22] Together they created the Mark McGwire Foundation for Children to support agencies that help children who have been sexually and physically abused come to terms with a difficult childhood. Mark has a son, Matthew b.1987, from a previous marriage (1984–1990, div.) to Kathleen Hughes.

Prior to admitting to using steroids, McGwire avoided the media and spent much of his free time playing golf.[23] He also worked as a hitting coach for Major League players Matt Holliday, Bobby Crosby, Chris Duncan and Skip Schumaker.[24]

McGwire appeared on an episode of the sitcom Mad About You, playing a ballplayer that Helen Hunt's character was infatuated with.

McGwire provided his voice for an episode of The Simpsons titled "Brother's Little Helper". He played himself.