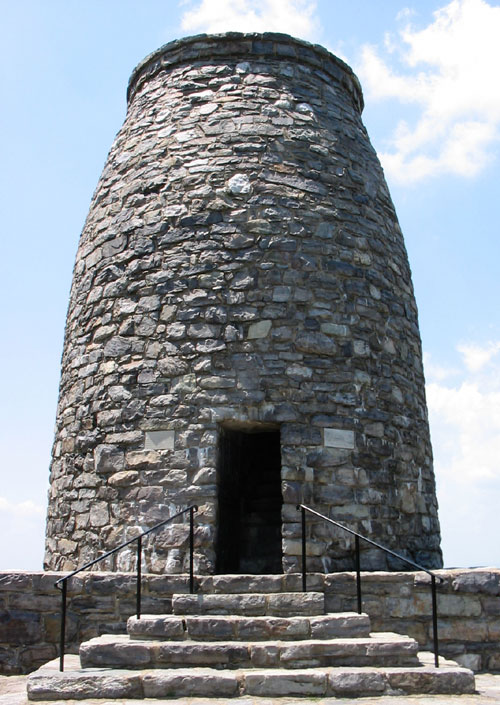 The Washington Monument in , , honors "Father of Our Country" .

Built in 1827, it was the first Washington monument completed. The Baltimore Washington Monument was completed two years later, although it had been started considerably earlier in 1815. The famous District of Columbia Washington Monument was not completed until 1885. The stone tower was built and dedicated to the first president by the citizens of Boonsboro on , . The tower is 34 feet (10.4 m) tall and was built by the citizens of the village of Boonsboro.

On , , at 7 a.m., most of the 500 inhabitants of the town assembled in the public square. A dedication service was held at noon. The volunteers gathered for lunch, and then work was resumed and continued until 4 o'clock, when the monument stood convert|15|ft|m high on a base convert|54|ft|m in circumference. Plans were made to complete the tower to a height of convert|30|ft|m "after the busy season," and in the fall of that year this was done.

In the ensuing years, the Washington Monument became a popular meeting place, but over the years, weather and vandalism reduced it to a pile of rubble. In 1882, the restoration of the monument was undertaken and carried out under the sponsorship of the Odd Fellows Lodge of Boonsboro. At this time a canopy was added, and a roadway for vehicles was built up the mountainside to the site. A decade later the rugged tower was marred by the development of a crack in the wall. Because it was not repaired, the monument again fell in ruins.

In 1920, the one acre site was purchased by the , and in 1934 it was deeded to the State of for use as a State Park. The tower was rebuilt in its present form by members of the , who set in place the original cornerstone and a facsimile of the dedication tablet.

The third dedication ceremony was held on , , exactly 109 years after that first day of patriotic activity by the citizens of Boonsboro, which produced the beginnings of the country's first completed monument to George Washington.

The goes through the state park, and passes the base of the monument.