Clara Kimball Young (September 6, 1890 – October 15, 1960)[1] was an American film actress, who was highly regarded and publicly popular in the early silent film era.

Clarisa Kimball was born in Chicago; her parents Edward M. Kimball and Pauline Maddern were travelling stock actors. She made her stage debut at the age of three, and throughout her early childhood travelled with her parents and acted with their theater company. She attended St. Francis Xavier's Academy in Chicago and then was afterwards hired into a stock company and resumed her stage career, travelling extensively through the United States and playing various small town theaters.[2]

Early in her career she met and married a fellow stock company and known Broadway actor named James Young. Young's previous wife had been the songwriter/lyricist Rida Johnson Young. After sending a photograph to Vitagraph Studios, Clara Kimball Young, as she was then known, and her husband were both offered yearly contracts in 1912.[1]

In the new medium of motion pictures, and without much screen competition, Clara Kimball Young's star at Vitagraph rose quickly. Young was predominantly cast in one and two reel roles as the virtuous heroine. By 1913 she had become one of the most popular leading ladies at Vitagraph and placed at number seventeen in a public popularity poll. Unfortunately, many of Young's films from her early period with Vitagraph are now lost.[3]

In 1914 Vitagraph released the drama My Official Wife which starred Young as a Russian revolutionary and was directed by her husband James Young and co-starred the popular leading man Earle Williams. The film, which is now lost, was an enormous success and launched Clara Kimball Young and Earle Williams into first place in the popularity polls and Young was immediately signed to a contract with legendary pioneering Hollywood mogul Lewis J. Selznick.[1]

After a string of successful roles, Young was firmly established as one of the chief attractions of World Film Corporation and her husband James was now a much sought after director. By 1915 Young's popularity was rivalling that of other early luminary actresses of the era: Mary Pickford, Dorothy and Lillian Gish, Pearl White, Edna Purviance, and Mabel Normand.[4]

Young became involved in a much publicized affair with Selznick, culminating in a 1916 divorce suit brought about by James Young, charging Clara with alienation of affection. James Young finally obtained a final decree on April 8, 1919 on grounds of desertion.[5]

Selznick quickly formed the Clara Kimball Young Film Corporation, installing himself as president, and formed Selznick Productions to distribute her films and those of some other independent producers. After only four films with Selznick however, the personal and business relationship began to sour and Kimball Young struggled to extricate herself from all business arrangements with Selznick, accusing him of defrauding her of her profits through a series of dummy corporations and by electing himself president of her company while not permitting her any input in her business affairs.[1] 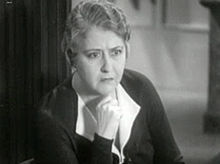 In 1917 Kimball Young became involved in an affair with Harry Garson, with whom she then teamed up with in a business venture. Garson had little experience in the motion picture business, and as a result Kimball Young's career began to sputter. Although she remained a popular actress into the early 1920s, Kimball Young suffered at the inexperience and alleged mismanagement and apathy of Garson.[1]

Kimball Young also began suffering a series of press attacks for her business dealings and personal relationship with Garson. By 1925, her stardom began to fade and she made her last silent film Lying Wives. Kimball Young spent the remainder of the 1920s performing in vaudeville, and in 1928 quietly married Dr. Arthur Fauman.

The advent of sound briefly revived her career, and she appeared in several featured talkie roles for RKO Radio Pictures and Tiffany Studios with only modest success, appearing only in bit parts including a Three Stooges short, and extra roles in mostly lower budget pictures and having a stint on radio. One of her bigger roles is in the murder mystery The Rogues Tavern (1936) where she plays a sweet but fussy motherly woman who is hiding a very big secret.

She quietly retired from her acting career in 1941. Clara Kimball Young died of a stroke at the Motion Picture House on October 15, 1960 in Woodland Hills, California and was interred at the Grand View Memorial Park Cemetery in Glendale, California.

For her contribution to the motion picture industry, Clara Kimball Young was given a star on the Hollywood Walk of Fame at 6513 Hollywood Blvd., in Hollywood, California, USA.[6]