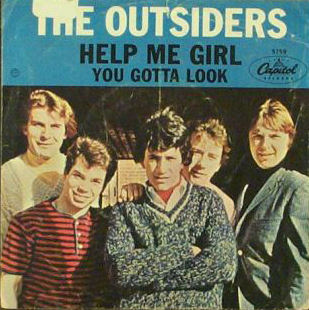 "The Outsiders" were an American group from , that was founded and led by guitarist Tom King. The band is best known for its Top 5 hit "" in early 1966, which peaked at #5 in the , but the band had several other hit singles and released a total of four albums in the mid-1960s.

History of the Band

"The Outsiders" were a continuation of the Starfires "(see article)"; a total of eight former "Starfires" were members of "the Outsiders" at one time or another. In 1964, "the Starfires" had added future "Outsiders" frontman on lead vocals and his brother Mike Geraci on sax. In an interview, Sonny Geraci stated: " [The Starfires] were a few years older than me.... When I joined the group, I kind of like, pushed them to record and change the drummer and change the guitar player."

The band was signed to on the strength of their late 1965 recording of "" (written by Tom King and his brother-in-law, Chet Kelley), leaving a local recording label headed by King's uncle, Patrick Connelly (Pama Records); at this time, the band's name was changed. (Most of the band's original songs were written by King and Kelley, although another songwriter, Bob Turek was working with the band by 1967). Reasons for the name change were unclear, although most sources state that it was at the insistence of their new .

"The Outsiders" promoted their hit single with about a year of nationwide touring. (Although their music was released in other countries, the band never toured overseas). As recounted by Sonny Geraci in a recent interview, they first toured with and then with . His favorite was a six-week tour of one-night stands that was headed by and included seven or eight other acts, among them , and . Afterwards, "the Outsiders" joined a four-week tour with several of the best and bands of the period: " [W] e did a tour after Pitney with , ourselves and , and a group from the west coast called . There were five rock bands. Was that a crazy tour!"

As is true of many bands in the Cleveland area in this time period, there were several line-up changes over the years, with Tom King and Mert Madsen from the original "Starfires" along with new vocalist Sonny Geraci forming the core of the band in the early years. After drummer Ronnie Harkai left the band to join the Air Force, Bennie Benson and then Ricky Baker (real name: Rick Biagiola) handled drumming duties for a period of time. Also, in a 1972 interview with , Jim Bonfanti – who was also a member of the Choir – told "" that he was the drummer on "Respectable" and "Girl In Love."

A cover of the ' "Respectable" from their second album, "Album #2" reached the Top 15. "Respectable" was their third single and had been performed by the band during their earlier years as "the Starfires". Although it includes only this one single and few of their better known songs, "Album #2" is regarded by many as their best album.

A promising single by outside songwriters, "Help Me Girl" (from "") had to compete with a version that was released in the same time period by the hot English band as a follow-up to their hit version of "". By some accounts, the Animals had already recorded their version, although they assured them this was not the case. Continuing the band's streak of bad luck, these songwriters offered the band another song; although included on their third album, "" was not released as a single. In 1968, this song became a major hit on both sides of the Atlantic when it was covered by in the USA and by Amen Corner in the UK.

After original bandmember Mert Madsen left the group to get married, two other ex-"Starfires", Walter Nims and Richard D'Amato, plus Richie D'Angelo on drums had joined the band. In the 1967-1968 period, other session players were brought in to beef up the band's recordings, among them drummer and bassist ; also, some recordings were produced by , who had worked with . Joe Kelley (apparently no relation to Chet Kelley), lead guitarist for made a guest appearance on the 1967 single "Gotta Leave Us Alone" (one of many singles by the band that does not appear on any of their four albums), the last of the band's singles to make the Billboard charts.

Capitol gave tentative approval to the band to proceed with their fourth album, which was to have been named after this single, "Leave Us Alone". However, the project was abandoned midway through the studio recording process, in favor of a faux "live album" called "", where crowd noises plus song and bandmember introductions by Sonny Geraci were added to stripped-down studio renditions of older recordings, along with some recordings by the new line-up. Not long thereafter, the group disbanded.

In 1970, Sonny Geraci organized a new band in that included Walter Nims and released two singles under the name "the Outsiders featuring Sonny Geraci"; the "O" in Outsiders was a . Meanwhile, Tom King was still heading a band called "the Outsiders" back in Cleveland, and this band also released a single "the Outsiders (featuring Jon Simonell)"; Simonell was the new lead singer who had replaced Geraci. King won a lawsuit in 1970 about the ownership of the name.

Geraci left the music business in 1980 and spent about five years in in his family's business. In about 1985, he began appearing with several other mid-1960s bands as "oldies" acts and continues to appear in live concerts to this day. Along the way, he has released a handful of solo CDs. Despite the earlier lawsuit about the name, began touring in 2007 as "Sonny Geraci and the Outsiders".

The most recent album by "the Outsiders", called "" was released in 1996 and reissued in 2006; two of the original members, Tom King and Walter Nims were on board (though not Sonny Geraci). The performances were taken from two live concerts in 1991 in and .

"The Outsiders" were one of the few white American soul-influenced bands at the time. In fact, one of the band's songs from their second album, "Lonely Man" was bootlegged by a small British label and released in the UK, credited to band "the Detroit Shakers" and retitled "Help Me Find My Way." [ [http://bomplist.xnet2.com/0112/msg00621.html "Bomp List" archives] , 8 Dec. 2001. Retrieved 17 Sept. 2007.]

The band is best known for its first record, the hit single "", which reached as high as #5 on the U.S. chart.

Other Top 40 songs by "the Outsiders" include their second single "Girl In Love" (a King-Kelley ballad that hit #21), "Respectable" (a song written by ) that reached #15, and "Help Me Girl" (which stalled at #37 when it was covered by ).

One indication that "the Outsiders" are not a standard-issue 1960s American band is found on the last track of the "" album. Though shown on the track listing as the familiar Rascals hit "", the song is actually "Good Good Lovin'" by .

In retrospect, had the band's manager, Roger Karshner, not gone against the grain and released "Girl in Love" after "", "Respectable" might have been a Top 10 hit as well. This horn-laced track carried on the unique "Mersey Rock-Motown" combination sound that had exploded "the Outsiders" earlier onto the charts. That decision by Karshner slowed down "the Outsiders"' momentum. Not releasing the singles "Lonely Man" and particularly "" with Sonny Geraci on lead vocals also undermined their ability to keep pumping singles into the Top 10. Karshner had a lot of influence with at the time, being one of their most proficient guys. He made "the Outsiders" an instant success with his radio connections, but his management decisions really stymied the group long term.

"The Outsiders" created a unique sound with "". The group produced all of their material in Cleveland, spearheaded by the many talents of Tom King, and Sonny Geraci's vision to take "the Outsiders" to another level. The sound they first created (combining Mersey Rock & Motown) can be traced to the later hits of and Chicago. , who would work with both of these groups as their manager, toured with "the Outsiders" as a musician on the Gene Pitney Caravan and incorporated this same sound combination in many of the hits he produced for both the Buckinghams and the early hits of Chicago.

"The Outsiders" had a built-in advantage over the numerous American bands that formed in the wake of the : Rather than being neophytes, "the Starfires" had been a very active band in the Cleveland scene since 1958, often playing six shows a week. Tom King and Chet Kelley proved to be a formidable songwriting team, and the band was also adept at handling covers of R&B standards. King also headed the band's horn section and served as the arranger and sometime producer. According to All Music Guide: "Part of the secret behind "the Outsiders"' musical success lay in the group's embellishments [with horns and strings] , which slotted in perfectly with their basic three- or four-piece instrumental sound. . . . [H] owever bold and ambitious they got, one never lost the sense of a hard, solid band sound at the core. With Geraci's magnificent singing out front, it was impossible for anyone with an ear for soul not to love how this group sounded, on their album tracks as well as their singles."

The music world has been slow to give "The Outsiders" the credit for the way that their rock n' roll classic, "", influenced many of the pop rock groups of the mid and late 60's. Due in part to the fact that "Time Won't Let Me" is still prominent on radio playlists, with their fine later singles being mostly omitted, the general public seems to regard "the Outsiders" as a "one hit wonder" band.

Still, "the Outsiders" have gathered a cachet of "cool" over the years that other American bands of the period have not enjoyed. As one of the few mainstream hit songs to make the grade, "" earned a slot on the landmark reissue as a of the classic "". Also, one of their songs, "I'm Not Trying to Hurt You" was included in the on the "Pebbles, Volume 9" LP. "Time Won't Let Me" has been covered numerous times, by everyone from to . wrote his second novel called "Time Won't Let Me" about a garage rock band being discovered by record collectors and then attempting to recapture their glory days as the bandmembers approached the age of 50; the book was a finalist for the in 2006.

Although the original "Outsiders" LPs have never been individually reissued as CDs, the band's four Capitol albums have been released on CD as "two-fer" packages on , along with bonus tracks. released "" in 1985, while has also released a "Capitol Collectors Series" retrospective album on CD.

Lead singer went on to score a major hit, "Precious And Few", as lead singer of the band Climax. The song was written by former "Outsiders" lead guitarist "Walter Nims".

Jim Fox, who had also previously been in the Starfires, was the founder of , a popular rock band in the late 1960s and 1970's.

The Outsiders (Other Musicians)

Initial Releases by the Original Band

Reissues and Releases outside the U.S.

Reissues and Releases outside the U.S.

"I'm Not Trying to Hurt You"

"Lost in My World"

"And Now You Want My Sympathy"