The Lammergeier, Lammergeyer, or Bearded Vulture, Gypaetus barbatus ("Bearded Vulture-Eagle"), is the only member of the genus Gypaetus. Traditionally considered an Old World vulture, it actually forms a minor lineage of Accipitridae together with the Egyptian Vulture (Neophron percnopterus), its closest living relative. They are not much more closely related to the Old World vultures proper than to, for example, hawks, and differ from the former by their feathered neck. Although quite dissimilar, Egyptian and Bearded Vulture both have a lozenge-shaped tail that is unusual among birds of prey.

It eats mainly carrion and lives and breeds on crags in high mountains in southern Europe, North Africa, Southern Africa,[2] the Indian Subcontinent, and Tibet, laying one or two eggs in mid-winter which hatch at the beginning of spring. Populations are resident.

The adult has a buff-yellow body and head, the latter with the black moustaches which give this species its alternative name. It may rub mud over its chin, breast and leg feathers, giving these areas a rust-coloured appearance. The tail feathers and wings are grey. The juvenile bird is dark all over, and takes five years to reach full maturity. The Lammergeier is silent, apart from shrill whistles at the breeding crags, and can live up to 40 years in captivity. 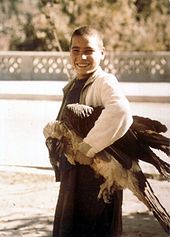 Like other vultures it is a scavenger, feeding mostly from carcasses of dead animals. It usually disdains the rotting meat, however, and lives on a diet that is 90% bone marrow. The Lammergeier can swallow whole bones up to the size of a lamb's femur[5] and its powerful digestive system quickly dissolves even large pieces. The Lammergeier has learned to crack bones too large to be swallowed by carrying them up to a height and then dropping them onto rocks below, smashing them into smaller pieces and exposing the nutritious marrow. This learned skill requires extensive practice by immature birds and takes up to seven years to master.[6] Its old name of Ossifrage ("bone breaker") relates to this habit. Live tortoises are also dropped in similar fashion to crack them open. Although dropping bones is a regular habit, the Lammergeier also obtains food by other means and has been known to seize and carry off live prey such as a two foot monitor lizard.[5]

The acid concentration of the Lammergeier stomach[7] has been estimated to be of pH about 1 and large bones will be digested in about 24 hours, aided by slow mixing/churning of the stomach content. The high fat content of bone marrow makes the net energy value of bone almost as good as that of muscle, even if bone is less completely digested. A skeleton left on a mountain will dehydrate and become protected from bacterial degradation and the Lammergeier can return to consume the remainder of a carcass even months after the soft parts have been consumed by other animals, larvae and bacteria.

Although the Lammergeier is threatened within its range in Europe, the species has a large range across Asia and Africa and is relatively common across much of that range. As such the species is listed as least concern by the IUCN and BirdLife International, although there is some evidence of decline. It was formerly killed in significant numbers because people feared (without justification) that it carried off children and domestic animals; the bird was also hunted as a trophy.[9]

This species was first described by Linnaeus in his Systema naturae in 1758 as Vultur barbatus.[10] The name of the Lammergeier originates from German Lämmergeier, which means "lamb-vulture" or "lamb-hawk". The name stems from the belief that it attacked lambs.[11]

The Greek playwright Aeschylus was said to have been killed in 456 or 455 BC by a tortoise dropped by an eagle who mistook his bald head for a stone – if this incident did occur, the Lammergeier is a likely candidate for the "eagle".

More recently, in 1945, it is said that Shimon Peres (called Shimon Persky at the time) and David Ben-Gurion found a nest of Bearded Vultures in the Negev desert. The bird is called peres in Hebrew, and Shimon Persky liked it so much he adopted it as his surname.[12]

Bearded Vulture is considered a threatened species in Iran. Iranian mythology considers the rare Lammergeier the symbol of luck and happiness. It was believed that if the shadow of a Huma fell on one, he would rise to sovereignty.[13]