"Choke ballast" (inductor) used in older lighting. This example is from a tanning bed. Requires a lamp starter (below) and capacitor.

Lamp starter, required with some inductor type ballasts. Connects both ends of the lamp together to "preheat" the lamp ends for 1 second before lighting.

An electrical ballast is a device intended to limit the amount of current in an electric circuit. A familiar and widely used example is the inductive ballast used in fluorescent lamps, to limit the current through the tube, which would otherwise rise to destructive levels due to the tube's negative resistance characteristic.

Ballasts vary greatly in complexity. They can be as simple as a series resistor as commonly used with small neon lamps or light-emitting diodes (LEDs). For higher-power installations, too much energy would be wasted in a resistive ballast, so alternatives are used that depend upon the reactance of inductors, capacitors, or both. Finally, ballasts can be as complex as the computerized, remote-controlled electronic ballasts now often used with fluorescent lamps.

Ballasts stabilize the current through an electrical load. These are most often used when an electrical circuit or device presents a negative (differential) resistance to the supply. If such a device were connected to a constant-voltage power supply, it would draw an increasing amount of current until it is destroyed or causes the power supply to fail. To prevent this, a ballast provides a positive resistance or reactance that limits the final current to an appropriate level. In this way, the ballast provides for the proper operation of the negative-resistance device by appearing to be a legitimate, stable resistance in the circuit.

An example of a negative-resistance device is a gas-discharge lamp, where after lamp ignition, increasing arc current reduces the voltage drop.

Ballasts can also be used simply to deliberately reduce the current in an ordinary, positive-resistance circuit.

Although LEDs are positive resistance devices, they have insufficient resistance to regulate their current consumption when operated from a voltage controlled source, so ballasts are used to control the current through the LED. Because the power dissipation is minuscule, simple resistor ballasts are normally used.

A ballast resistor compensates for normal or incidental changes in the physical state of a system. It may be a fixed or variable resistor.

For simple, low-powered loads such as a neon lamp or LED, a fixed resistor is commonly used. Because the resistance of the ballast resistor is large it dominates the current in the circuit, even in the face of negative resistance introduced by the neon lamp.

Modern electronic ignition systems do not require a ballast resistor as they are flexible enough to operate on the low cranking voltage or the ordinary operating voltage.

In some old AC/DC receivers (universal sets), the vacuum tube heaters are connected in series. Since the voltage drop across all the filaments in series is sometimes less than the full mains voltage, it was often necessary to get rid of the excess voltage. A ballast resistor was often used for this purpose, as it was cheap and worked with both AC and DC.

This property can lead to more precise current control than merely choosing an appropriate fixed resistor. The power lost in the resistive ballast is also reduced because a smaller portion of the overall power is dropped in the ballast compared to what might be required with a fixed resistor.

In times past, household clothes dryers sometimes incorporated a germicidal lamp in series with an ordinary incandescent lamp; the incandescent lamp operated as the ballast for the germicidal lamp. A commonly used light in the home in the 1960s in 220-240V countries was a circleline tube ballasted by an under-run regular mains filament lamp. Self ballasted mercury-vapor lamps incorporate ordinary tungsten filaments within the overall envelope of the lamp to act as the ballast, and it supplements the otherwise lacking red area of the light spectrum produced. 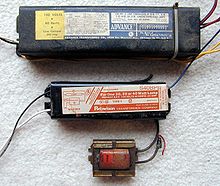 Because of the power that would be lost, resistors are not used as ballasts for lamps of more than about two watts. Instead, a reactance is used. Losses in the ballast due to its resistance and losses in its magnetic core may be significant, on the order of 5 to 25% of the lamp input wattage. Practical lighting design calculations must allow for ballast loss in estimating the running cost of a lighting installation.

An inductor is very common in line-frequency ballasts to provide the proper starting and operating electrical condition to power a fluorescent lamp, neon lamp, or high intensity discharge (HID) lamp. (Because of the use of the inductor, such ballasts are usually called magnetic ballasts.) The inductor has two benefits:

A disadvantage of the inductor is that current is shifted out of phase with the voltage, producing a poor power factor. In more expensive ballasts, a capacitor is often paired with the inductor to correct the power factor. In ballasts that control two or more lamps, line-frequency ballasts commonly use different phase relationships between the multiple lamps. This not only mitigates the flicker of the individual lamps, it also helps maintain a high power factor. These ballasts are often called lead-lag ballasts because the current in one lamp leads the mains phase and the current in the other lamp lags the mains phase.

For large lamps, line voltage may not be sufficient to start the lamp, so an autotransformer winding is included in the ballast to step up the voltage. The autotransformer is designed with enough leakage inductance so that the current is appropriately limited.

Because of the large inductors and capacitors that must be used, reactive ballasts operated at line frequency tend to be large and heavy. They commonly also produce acoustic noise (line-frequency hum).

Prior to 1980 in the United States, PCB-based oils were used as an insulating oil in many ballasts to provide cooling and electrical isolation (see transformer oil).[1][2] 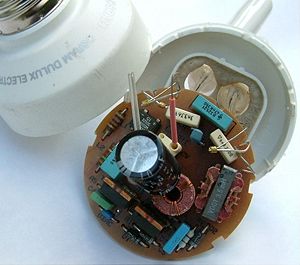 An electronic lamp ballast uses solid state electronic circuitry to provide the proper starting and operating electrical condition to power one or more fluorescent lamps and more recently HID lamps. Electronic ballasts usually change the frequency of the power from the standard mains frequency of 50 - 60 Hz to 20 000 Hz or higher, substantially eliminating the stroboscopic effect of flicker (a product of the line frequency) associated with fluorescent lighting (see photosensitive epilepsy). In addition, because more gas remains ionized in the arc stream, the lamps actually operate at about 9% higher efficacy above approximately 10 kHz. Lamp efficacy increases sharply at about 10 kHz and continues to improve until approximately 20 kHz.[3] Because of the higher efficiency of the ballast itself and the improvement of lamp efficacy by operating at a higher frequency, electronic ballasts offer higher system efficacy for low pressure lamps like the fluorescent lamp. For HID lamps there is no improvement of the lamp efficacy in using higher frequency, but for these lamps the ballast losses are lower at higher frequencies and also the light depreciation is lower meaning more light after a given operating time of say 10 000 hours. Some HID lamp types like the Ceramic discharge metal halide lamp have reduced reliability when operated at high frequencies in the range of 20 - 200 kHz and for these lamps a square wave low frequency current drive is mostly used with frequency in the range of 100 - 400 Hz, with the same advantage of lower light depreciation. Electronic ballasts are often based on the SMPS topology, first rectifying the input power and then chopping it at a high frequency. Advanced electronic ballasts may allow dimming via pulse-width modulation or via changing the frequency to a higher value and remote control and monitoring via networks such as LonWorks, DALI, DMX512, DSI or simple analog control using a 0-10V DC brightness control signal. Recently also systems remotely controlling the dim level via a wireless mesh network have been introduced.

An instant start ballast starts lamps without heating the cathodes at all by using high voltage (around 600 V). It is the most energy efficient type, but gives the least number of starts from a lamp as emissive oxides are blasted from the cold cathode surfaces each time the lamp is started. This is the best type for installations where lamps are not turned on and off very often.

A rapid start ballast applies voltage and heats the cathodes simultaneously. It provides superior lamp life and more cycle life, but uses slightly more energy as the cathodes in each end of the lamp continue to consume heating power as the lamp operates. A dimming circuit can be used with a dimming ballast, which maintains the heating current while allowing lamp current to be controlled.

A programmed-start ballast is a more advanced version of rapid start. This ballast applies power to the filaments first, then after a short delay to allow the cathodes to preheat, applies voltage to the lamps to strike an arc. This ballast gives the best life and most starts from lamps, and so is preferred for applications with very frequent power cycling such as vision examination rooms and restrooms with a motion detector switch.