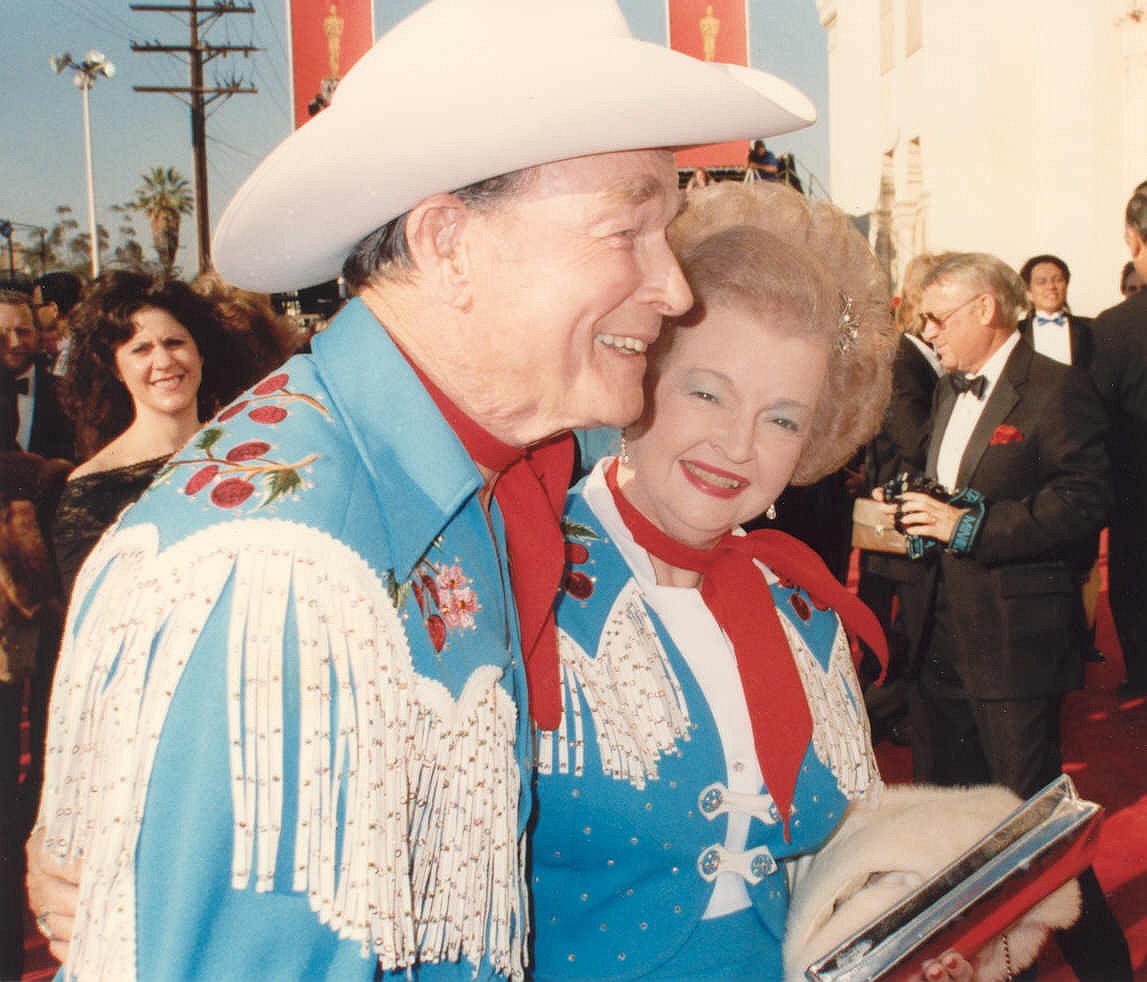 Roy Rogers (born Leonard Franklin Slye) (November 5, 1911 &ndash; July 6, 1998), was a singer and . He and his third wife , his golden Trigger, and his , Bullet, were featured in over one hundred movies and "". The show ran on radio for nine years before moving to television from 1951 through 1957. His productions usually featured two sidekicks, , (who drove a jeep called "Nellybelle"), and the crotchety . Roy's nickname was "King of the Cowboys". Dale's nickname was "Queen of the West." For many Americans (and non-Americans), he was the embodiment of the all-American hero.

Rogers was born to Andrew ("Andy") and Mattie (Womack) Slye in , where his family lived in a tenement building on 2nd Street. ( was constructed at this location in 1970 and Rogers would later joke that he had been born at second base.) Dissatisfied with his job and city life, Andy Slye and his brother Will built a 12-by-50-foot houseboat from salvage lumber and in July 1912 the Slye family floated up the towards . Desiring a more stable existence in Portsmouth, Rogers' parents purchased land on which to build a home, but the flood of 1911 allowed them to move the houseboat to their property and continue living in it on dry land.

In 1919 the Slyes purchased a farm about twelve miles north of Portsmouth at Duck Run near . They there built a six-room home. Rogers' father soon realized that the farm alone would provide insufficient income for his family and he took a job at a shoe factory in Portsmouth, living there during the week and returning home on the weekends, bearing gifts for the family following paydays, one of which was a horse on which Rogers learned his horsemanship.

After completing the eighth grade, Rogers attended high school at . When he was seventeen his family returned to Cincinnati, where his father began work at a shoe factory. Rogers soon decided on the necessity to help his family financially, so he quit high school, joined his father at the shoe factory, and began attending night school. After being ridiculed for falling asleep in class, however, he quit school and never returned.

Rogers and his father felt imprisoned by their factory jobs. In 1929 Rogers' older sister Mary was living at with her husband. Father and son decided to quit their shoe factory jobs. The family packed their 1923 Dodge for a visit with Mary and stayed four months before returning to . Almost immediately, Rogers had the opportunity to travel to California with Mary's father-in-law, and the rest of the family followed in the spring of 1930.

The Slyes rented a small house near Mary. Rogers and his father immediately found employment as truck drivers for a highway construction project. They reported to work one morning, however, to learn their employer had gone bankrupt. The economic hardship of the had followed them West and the Slyes soon found themselves among the economic refugees traveling from job to job picking fruit and living in worker campsites. (Rogers would later read 's "" and marvel at its accuracy.) One day Andy Slye heard of a shoe factory hiring in Los Angeles and asked Rogers to join him in applying there for work. Rogers, having seen the joy that his guitar and singing had brought to the destitute around the campfires, hesitantly told his father that he was going to pursue a living in music. With his father's blessing, he and cousin Stanley Slye went to Los Angeles and sought musical engagements as The Slye Brothers.

In 1933, Roy married Lucile Ascolese, but they were divorced just three years later. Lucile had apparently been pregnant with Roy's child, but according to papers filed in the divorce case, she and her mother arranged to have an abortion.

Roy remarried in 1936 to Grace Arline Wilkins. In 1941 the couple adopted a girl, Cheryl Darlene. In 1942, they legally changed their names to Roy and Grace Arline Rogers. The following year, Arline bore a daughter, Linda Lou. A son, Roy Jr. ("Dusty"), followed in 1946, and Arline died of complications from the birth a few days afterward.

Rogers moved to California at eighteen to become a singer. After four years of little success, he formed , a western cowboy music group, in 1934. The group hit it big with songs like "" and "".

From his first film appearance in 1935, he worked steadily in western , including a large supporting role as a singing cowboy while still billed as "Leonard Slye" in a movie. In 1938 when Autry temporarily walked out on his movie contract, Slye was immediately rechristened "Roy Rogers"

Roy and Dale fell in love, and Roy proposed to her during a rodeo at . They married on New Years Eve in 1947 at the Flying L Ranch in where a few months earlier they had filmed . Roy and Dale remained married until Roy's death in 1998.

Rogers was an idol for many children through his films and television show. Most of his films were in color in an era when almost all other s were black and white. There were Roy Rogers s, cowboy adventure novels, a comic strip, a long-lived comic book series ("Roy Rogers Comics") written by , and a variety of marketing successes. Some of his movies would segue into animal adventures, in which Roy's horse Trigger would go off on his own for a while with the camera following him.

The Sons of the Pioneers continued their popularity through the 1950s. Although Rogers was no longer a member, they often appeared as Rogers' backup group in films, radio and television.

In August 1950, Dale and Roy had a daughter, Robin Elizabeth, who died of complications of shortly before her second birthday. Evans wrote about losing their daughter in her book "Angel Unaware".

Rogers and Evans were also well known as advocates for and as founders and operators of children's charities. They adopted several children. Both were outspoken s. In , where they made their home, numerous streets and highways as well as civic buildings have been named after them in recognition of their efforts on behalf of homeless and handicapped children. Roy was an active and a and was noted for his support of their charities.

Roy and Dale's famous theme song, which Dale wrote and they sang as a duet to sign off their television show, was "Happy trails to you, Until we meet again...".