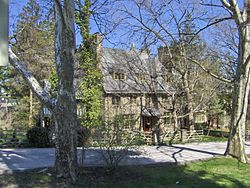 Stone cottage in Mount Airy, Philadelphia. The community is known for its elegant examples of 18th and 19th century residential architecture.

For other uses, see Mount Airy.

Mount Airy is a neighborhood of Northwest Philadelphia in the state of Pennsylvania.

Mount Airy is bounded on the northwest by the Cresheim Valley, which is part of Fairmount Park. Beyond this lies Chestnut Hill. On the west side is the Wissahickon Gorge, which is also part of Fairmount Park, beyond which lies Roxborough and Manayunk. Germantown borders the southeast of Mount Airy, and Stenton Avenue marks the northeast border. Beyond Stenton Avenue is Cedarbrook and West Oak Lane.

The USPS does not officially correlate neighborhood names to Philadelphia ZIP codes (all are called simply "Philadelphia" or "Phila").[1] However, the 19119 ZIP code is almost entirely coterminous with the cultural-consensus boundaries of Mount Airy.

There is no "official" boundary between Mount Airy and Germantown. The most common consensus is that Johnson Street is the de facto boundary; however, Washington Lane could also be viewed as a boundary. The question is moot, however, as the two neighborhoods blend together very gradually. Historically, the entire area was part of the German Township. Many buildings in Mount Airy carry the identity and even the name of Germantown in one way or another. For example, the Unitarian Church of Germantown, the Germantown Jewish Center, the Germantown Christian Assembly, and the Germantown Montessori School are all in Mount Airy, yet also belong culturally to Germantown. Parts of the Battle of Germantown in 1777 occurred throughout Mount Airy. The special relationship linking the two has its roots in the time before the Act of Consolidation, when Germantown was a borough separate from the City of Philadelphia, and its rural environs were what is now Mount Airy.

William Allen, a prominent Philadelphia merchant and Chief Justice of the Province of Pennsylvania, created his summer estate and mansion on Germantown Avenue at Allens Lane in 1750, and the area eventually took the building's name, Mount Airy, as its own.[2] Before this, the area which makes up the modern neighborhood of Mount Airy was part of two sections of the original Germantown Township (which covered all of Germantown, Mount Airy, and Chestnut Hill), Cresheim and Beggarstown.

The village or Dorfshaft of Krisheim (also known as Cresheim) has its origins in the original land divisions of Germantown Township in 1689.[3] It was a section of the township that was allotted to a group of original Germantown settlers who acquired rights to land either directly or indirectly from William Penn. It covered the area from Stenton to Wissahickon Avenues and from Mermaid Lane to roughly Sedgwick Street. The name is derived from a town known today as Kriegsheim in the Palatine in Germany which was the hometown of a few German Quaker families who had settled in Germantown in the 1680s. Throughout much of the 18th century, this area of Germantown Township was known in the land and tax records as simply Cresheim or Cresham. It was at the beginning of the 19th century that the name Mount Airy began to replace Cresheim.[4]

Beggarstown (also Beggars-town or Beggar Town), an area centered along Germantown Avenue between Gorgas Lane and Cliveden Street, was formed out of the so-called "Sidelands" of Germantown. The Sidelands were a section of Germantown Township that had been set aside so that the owners of lots in the center of Germantown could have access to an equal share of land in the entire village of Germantown section of Germantown Township. The portion from which Beggarstown grew covered the area from Upsal Street to roughly Sedgwick Street, Stenton Avenue, and Wissahickon Avenue. As the Germantown village filled up, settlers began to move northwest along Germantown Avenue. By the 1730s and 1740s, the Sidelands area was subdivided into smaller house lots. An account published in 1770 states that the area received its name as a result of its first resident's begging for money to build his house, which later became the home of the Germantown Church of the Brethren. The name for this area disappeared by the late 19th century, and it was sometimes called Pelham, Germantown, or Mount Airy.

The area is recognized by many civil rights groups as one of the first successfully integrated neighborhoods in America.[7][8] Mount Airy residents organized to resist blockbusting, panic selling, and redlining, especially during the period from the late 1950s to the early 1970s when those practices were prevalent.[9][10] It continues to be a well-blended neighborhood and was recently cited in Oprah Winfrey's O magazine for its racial diversity and neighborhood appeal. The community has also been recognized by US News & World Report for racial harmony and balance.[11]

Mount Airy has a significant number of lesbian households.[12] It has been called a "Ph.D. ghetto" because many residents have advanced degrees.[8] The political tone of the neighborhood is predominantly liberal.[13] Mount Airy is favored as a neighborhood of choice for city politicians, judges, and others who are required to reside within the city's limits.[citation needed] One prominent Mount Airy politician is former Republican mayoral candidate Sam Katz.

Mount Airy has long been a neighborhood of choice for many of the city's prosperous African Americans.[8]

A Hare Krishna community is located on West Allens Lane.

West Mount Airy has a reputation for being affluent, similar to Chestnut Hill, and the East more working class, although counter-examples abound.[8] In general, the affluence of the neighborhood increases with proximity to Fairmount Park and Chestnut Hill.

A commute to Center City is approximately a twenty minute drive without heavy traffic.[17] The large suburban shopping and office districts around King of Prussia, Plymouth Meeting, and Conshohocken are also within about a fifteen to twenty-five minute drive of Mount Airy.[18][19] Mount Airy is also served by public transportation. Two SEPTA Regional Rail lines connect the neighborhood to Center City. The Chestnut Hill West Line runs through West Mount Airy with stops at Allen Lane, Carpenter and Upsal stations, and the Chestnut Hill East Line through East Mount Airy with stops at Mount Airy, Sedgwick and Stenton stations—Washington Lane station is in Germantown across the street from Mount Airy. The neighborhood is also served by bus routes 18, 23 (formerly a trolley line), 53 (formerly a trolley line), H, and L.[citation needed]

Mount Airy's main commercial district lies along cobblestoned Germantown Avenue, which also serves as the boundary between East and West Mount Airy. The neighborhood has a variety of independent shops, restaurants, art galleries, clothing stores, coffee shops, a gastropub, wine bar, and professional offices. In 2011, the New York Times described the influx of new businesses to Mount Airy as a "cultural revival" buoyed by "the neighborhood's reasonable housing costs and relatively safe streets."[13] Its shopping district along "The Ave" gives it a small-town feel, although there are also a few chain stores such as an Acme Supermarket and a Wawa. Mount Airy is also home to Weavers Way Co-op, a long-running co-op grocery store, and two local, tented farmers' markets.[20] It has two independent bookstores: Big Blue Marble Bookstore, with new titles catering to neighbors' interests; and Walk a Crooked Mile Books, a large used-book store housed in the Mount Airy train station. West Mount Airy has a small commercial district of its own centered around Greene Street and Carpenter Lane, whereas East Mount Airy has more diffuse commercial districts along Stenton and Chew Avenues. 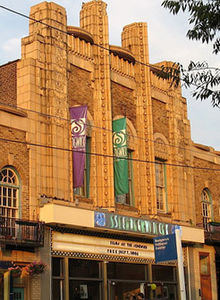