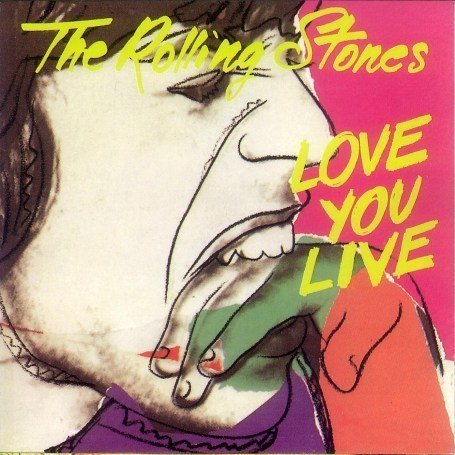 "Love You Live" is a double by , released in 1977. The album is drawn from Tour of the Americas shows in the in the summer of 1975, Tour of Europe shows in 1976 and performances from the infamous nightclub concert venue in in 1977. It is the band's third official full-length live release.

The album was overdubbed and mixed from late May to mid-June 1977; it features and Ian Stewart on piano. "Love You Live"'s artwork was prepared by , and the pencil smears seen across the front were added to Warhol's dismay by . Released in September 1977, the album was well-received and managed to reach #3 in the UK and #5 in the US, where it went gold.

"Love You Live" was The Rolling Stones' final album whereby would be internationally distributed by . The band's next several albums would be distributed through worldwide, while they remained with Warner in only.

"Love You Live" was the final album where Keith Richard's name would be spelled as such, returning his surname to "Richards" beginning with 1978's "". Keith Richards had just been busted for the possession of in Canada, after recording for this album.

The Stones decided to round out the live album by adding a second side of live club recordings performed at the El Mocambo Club in Toronto on March 4 and 5, 1977. The intention was to rip through a set of the sort of classic blues and R&B covers that sealed their reputation back at the in 1963. Yet while the rest of The Rolling Stones arrived in Toronto on the scheduled day, ready to rehearse, Richards was still back in . Eight days and dozens of angry phone calls and telegrams from his bandmates later, Richards and Pallenberg decided to join the others. Whilst flying to Toronto, Richards shot up in the plane's lavatory, and absent-mindedly chucked his drug paraphanalia into his wife's handbag which was immediately searched by customs upon landing. Though the and Canada customs officials allowed them to travel on to the hotel, the couple would be in for a surprise a couple of days later. Richards was awoken four days later by Canadian police who had already ransacked his room and found his stash of drugs which were large enough under Canadian law for Richards to face some serious trafficking charges, let alone possession.

Amazingly, considering the circumstances -and Jagger's paranoia that Richards could bring down the heat on all of them- The Rolling Stones consistently blew the roof off the El Mocambo club; the versions of "" and "" on "Love You Live" particularly capturing the raunch of the performances. According to the band itself, the March 4 concert was shaky and troubled, but the March 5 gig was terrific. It must be noted that the versions that appear on album are heavily overdubbed, mostly with layers of new guitars. In the process, the Stones gained a very high profile groupie; none other than , whose marriage to the Prime Minister was on shaky ground. Typically, Jagger decided to try cozy up to Mrs. Trudeau in order to see if she could use some of her influence to help get Richards off the hook. To no avail; ultimately it was Ronnie Wood "Madcap Maggie" really hit it off with; naturally the press caught wind of their affair and created a firestorm had not seen since the seven years before. Fortunately for the Canadian government, the Wood/Maggie affair blew over. opened for the band, and The Rolling Stones appeared secretly under fake band names on the bill so the majority of the fans thought they were attending an April Wine concert. April Wine also recorded their live album "" at these same concerts.

The album is dedicated to the memory of audio engineer "Those whom the gods love grow young". Harwood died in a drug-induced car accident shortly before the album's release.

A couple of minor song title differences occur on "Love You Live": "" is spelled with a "g" instead of the usual apostrophe (although it is corrected on the reissue), while "" loses its bracketed title.

All songs by Mick Jagger and Keith Richard, except where noted.