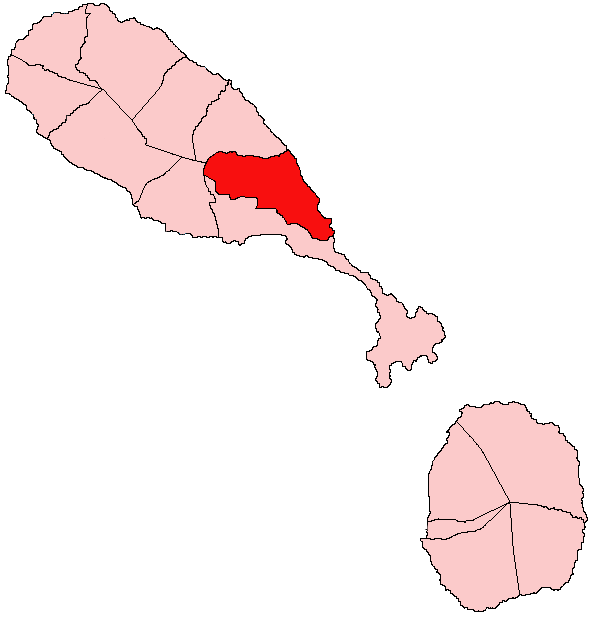 Saint Peter Basseterre is one of 14 administrative parishes that make up . It is located on the main island of and the parish capital is .

The parish's 8 square miles consists of forest-covered rugged hills and mountains in the North west and interior, climaxing at the near 3000 ft. Olivee's Mountain. Another notable feature is Monkey Hill, which despite its name rises to over 1000 ft. above sea level and is thus in actuality a mountain. It lies just South-East of Olivee's Mountain. The ridge of hills in the North continues Eastward to the Canada hills before breaking to the Conaree Hills. South of this Northern ridge lies the flat and fertile , home to the Monkey Hill Village and most of the other settlements of the parish. It is also home to many peasant farms and also the , which serves the island. The coastline is marked by a 6 mile long continuous strip of sand that stretches from Saint Mary Cayon, into and eventually into , the sands lightening in hue as one descends southward. Notable areas along the stretch are Barker's Point and Conaree Beach. The beaches of Saint Peter Basseterre are used by Leatherback turtles to lay their eggs and have large reef formations offshore.

Saint Peter's parish's economy is highly industrial. The Canada Estate area is home to the island's quarry site, and many subsidiary industries which manufacture blocks and ready-mixed concrete. Many of the island's trucking and heavy-equipment services are also headquartered there. The parish is also home to the island's waste disposal area, located North of the village of Conaree.

The parish is also home to the island's airport, the larger of the two in the federation. Near the village of Conaree also lies two of the island's best-kept sporting facilities, used for and .

The Conaree area was once home to many small inns, which hugged Conaree beach, though many have been deserted. It also once housed a gospel radio station but it was moved to Nevis in 1990.

Agriculture dominates the Basseterre Valley, and peasant farmers rear livestock and grow various fruits and vegetables for local consumption on their small holdings.

Tourism is not a particularly key industry in the parish, though it is home to the White House Inn and the ruins of the at La Fontaine, once the elaborate and lavish home of St.Kitts' famous former French governeur, Phillipe de Longvilliers de Poincy.

The parish is home to the , which serves the island of Saint Kitts, and is often credited as being the finest mid-sized airport in the Caribbean.

There are no seaports in the parish due to the harsh waves along the coast and the many dangerous reef formations.

There is but one community festival: the St. Peter's Fest, which is celebrated in October. Many persons from outlying villages such as Monkey Hill and Ogee's watches the splendour in this riveting festival.This festival features calypso shows, queen shows, parties, street jam sessions and late night limes (hang outs).