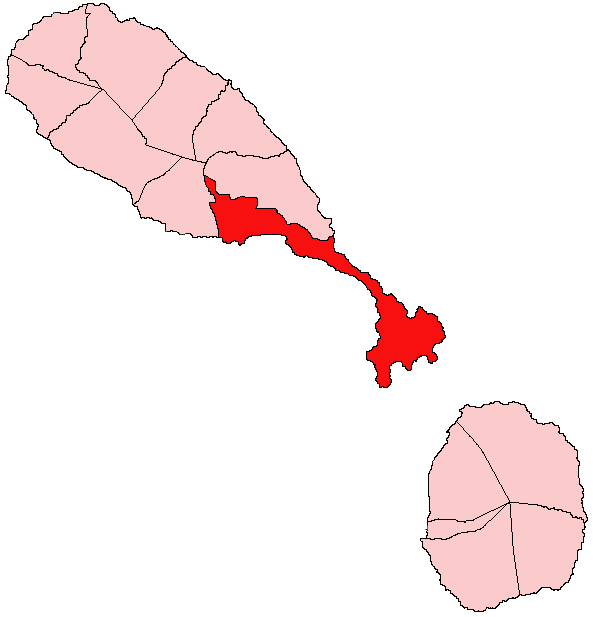 The parish's 11 square miles offer the most diverse terrain to be found in a single parish in the country. The northern part of Saint George Basseterre comprises the large , one of the most fertile spots on the island. The expansive flatlands are intensively used for agriculture, with the city of Basseterre skirting the coast. The central and southern portions of the parish constitute Saint Kitts' , and has a strikingly contrasting arid climate. It is made up of eroded hills, scrub vegetation, salt ponds and white sand beaches. The largest pond, the Great Salt Pond, covers 3 square miles. A mile offshore, in the centre of the channel separating Saint Kitts and Nevis lies Booby Island, a rocky island not officially claimed by Saint George Basseterre nor Saint James Windward.

The capital city of Saint Kitts and Nevis, , is located on the coast of Basseterre (Spawnapuss) Bay, but the city also stretches northward into the parish of . The location is ideal, as it is the congregation of the island's 4 main thoroughfares (West to Sandy Point, East to Cayon, North to Monkey Hill, and South to the South East Peninsula). The parish's other settlements act as suburbs to the city. Some of the suburbs are Frigate Bay, Mattingley, Bird Rock, Harbour View and New Road. The rich agricultural lands surrounding Basseterre are heavily cultivated, mainly with fruits and vegetables for local consumption as well as for sale to cruise ships and hotels.

Being home to all of St. Kitts' white sand beaches, the South East Peninsula in Saint George Basseterre is the centre for the island's tourism industry. At present, nearly all the tourism development is at the resort town of Frigate Bay, ideally located on a narrow isthmus with 2 fine beaches (one on the Caribbean side and one on the Atlantic side) within 5 minutes walking distance of one another. It is also home to Saint Kitts' championship golf course.

Saint George Basseterre is home to three community festivals, Newtown Fest, Gut O'Rama and Village O'Rama. Newtown Fest is held in East Basseterre, mainly centered around the Newtown community, one of the oldest settled wards in the city of Basseterre. Held in mid-September, it features calypso shows, beauty pageants, jam sessions and late night liming sessions. Gut O'Rama is an annual festival held in Central Basseterre, with most activities located in the Westbourne Ghaut area (thus the name). The other community festival in Basseterre is the oldest running and largest (by participant population) community festival in St. Kitts, Village O' Rama. Held in early December, it has the usual festival celebrations (calypso, pageants and jamming), held in 'De Village,' the name given to the collective Western Basseterre communities (because the ward resulted from the overgrowth and amalgamation of several small, separate villages once in the area).

The bulk of the Eastern section of the Basseterre Valley (about 2 square miles) is to be developed into a large national park, in attempt to protect the aquifer system beneath it.

Future tourism developments are centred around the Great Salt Pond area in the south. Villa developments are also in the works on various hills and ridges on the peninsula, as well as a dolphin park on South Friar's Bay.

The city of Basseterre was also a venue for the .