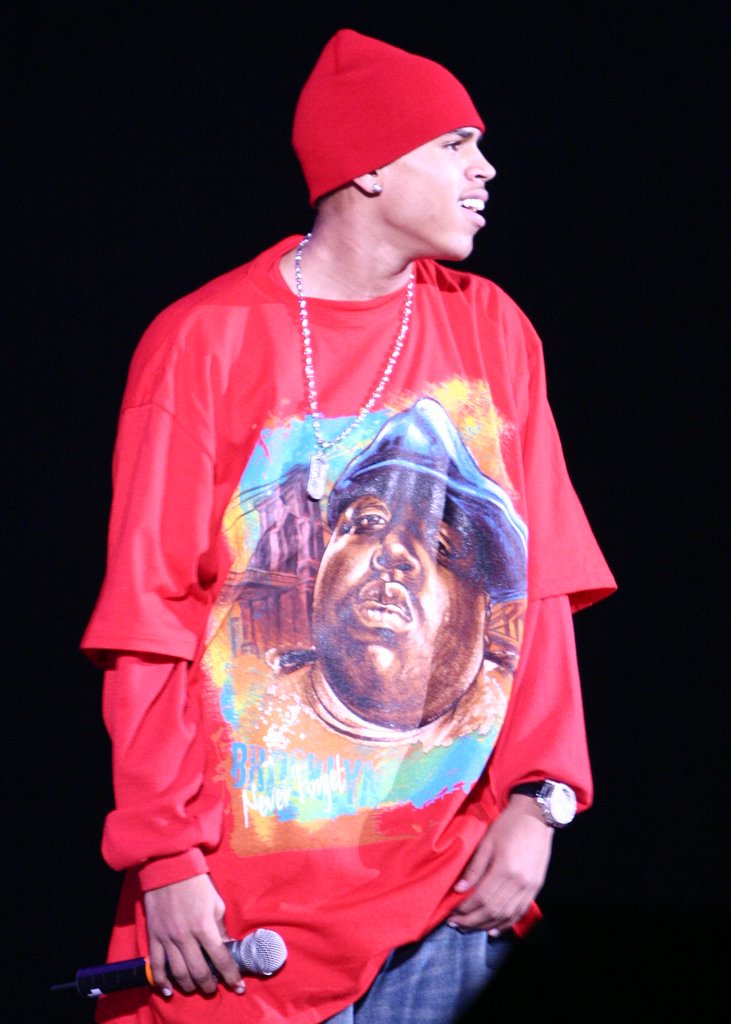 Christopher Maurice Brown (born May 5, 1989) [ [http://www.tv.com/chris-brown/person/1902/summary.html Chris Brown] ] is a Grammy-nominated American R&B and pop , r, and . He made his recording debut in late 2005 with "Chris Brown" at the age of 16. The album featured the hit single "", which topped the "Billboard" Hot 100, making Brown the first male artist to have his debut single to top the chart.

In addition to his solo commercial success, Brown has been featured on several hits such as "", a duet with singer , "" with the rapper and "" alongside and . The songs have peaked on number three, number nine and number ten on the "Billboard" Hot 100 respectively. [ [http://www.billboard.com/bbcom/charts/chart_display.jsp?f=Pop+100&pageNumber=Top+11-50&g=Singles Billboard - Updated Album Charts from the most Trusted Music Magazine] ] [ [http://acharts.us/song/11170 Shortie like Mine Chart Track] . "Accharts." Accessed August 16, 2008.] [ [http://acharts.us/song/33939 Lil Mama and Chris Brown - Shawty Get Loose - Music Charts] . "Accharts." Accessed August 16, 2008.] Due to his vocal and dance routines, Brown has been compared to renowned R&B artists such as Usher and , citing both as large influences on his music. [cite web
url=http://new.music.yahoo.com/blogs/hiphopmediatraining/19398/usher-has-chris-brown-taken-your-spot|title=Usher, Has Chris Brown Taken Your Spot?|author= Billy Johnson, Jr.|publisher= [http://music.yahoo.com/ Yahoo! Music] |date=2008-05-01|accessdate=2008-08-16]

Brown was born and raised in the small town of , the son of Joyce Hawkins and Clinton Brown.

At the age of thirteen, Brown and his mother began looking for opportunities of a record deal. He was discovered by a local production team who visited his father's gas station searching for new talent. At the age of 15, Brown was then sent to perform for and was subsequently signed in 2004 to . By early 2005, Brown began work for his debut album, working with the likes of , The Underdogs, , , , and .

His third single, "", was released in March 2006 which featured for a remix, originally not featured on the album, but was later included. The single debuted on the U.S. "Billboard" Hot 100 at #80 and climbed the charts quickly peaking at #15. Brown also co-directed his music videos for "Yo (Excuse Me Miss)" and "Gimme That". His fourth single is the ballad "Say Goodbye", which is also a part of the "Step Up" soundtrack. On June 13, 2006, Brown released a DVD entitled, "Chris Brown's Journey", which shows footage of him traveling in England and Japan, getting ready for his first visit to the , behind the scenes of his music videos and bloopers.

On August 17, 2006 to further promote the album, Brown began his major co-headlining tour, "The Up Close and Personal Tour". Due to the tour, production for his next album was pushed back two months. Brown was also the opening act for R&B singer on the Australian leg of her "" tour.

Shortly after ending his summer tour with , Brown quickly began production for his second studio album, "Exclusive", which was set to be released on August 28, 2007 until it was pushed to November 6, 2007. The album debuted at number 4 on the "Billboard" 200 and number 2 on the Billboard selling nearly 300,000 copies in its first week domestically, 140,000 more copies than his debut album.

According to News, Brown stated: "I am still going to keep it so my younger fans can continue to listen to my music, but I got a couple of joints on there that's for some of the older people." The album's first single, "Wall to Wall", debuted on the 'Billboard" Hot 100 at #96, and peaked at #79 and #22 on the Billboard R&B and Hip-Hop Chart becoming his lowest charting song to date."Kiss Kiss", featuring and produced by , was released as the second single. "Kiss Kiss", has become more successful surpassing the success of "Wall To Wall", reaching #1 on the U.S. "Billboard" Hot 100 to become Chris' second #1 single and his highest chart peak since "Run It!" in 2005. On December 4, 2007, Brown released the third single from "Exclusive", entitled "With You", a song produced by Stargate. So far, "With You" has reached #2 on the "Billboard" Hot 100 and has entered the charts in various countries around the world, becoming one of Brown's most successful released to date, entering the top ten in , , , , , , , Canada, the United States, , , France, the United Kingdom, , , Australia, and the United World Chart.

Brown re-released "Exclusive" on June 3, 2008 as a deluxe edition, renamed "", seven months after the release of the original version. The re-release version features four new tracks, including the new single "Forever" which has reached number 2 on Billboard Hot 100 so far.

In support of the album, Brown embarked on his "The Exclusive Holiday" concert tour, visiting over thirty venues in United States. He started the tour in , on December 6, 2007 and concluded it on February 9, 2008 in . The documented footage was released on June 3, 2008 as the double disc of "".

Brown is featured on the forthcoming album on a track featuring The Game, co-produced by the The Game and . [ [http://media.hurricane-game.net/play.php?vid=263 Game explains Chris Brown appearance on Nas album] ]

Chris Brown will be featuring along side Sean Garrett for Ludacris's hit single "" off Ludacris's album .

received $50,000 in ticket proceeds from Brown's 2006 "Up Close & Personal" tour. In 2008, Brown lent his efforts to promote the Math-A-Thon benefiting that hospital by starring as the host in a film to promote it. [ [http://www.mathathon.org/chris_10_07.shtml St. Jude Children's Research Hospital] ]