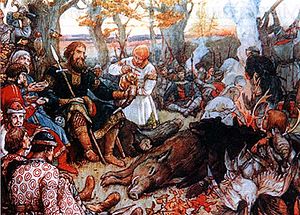 Grand Prince Vladimir Monomakh of the Rurikid dynasty feasting with his Druzhina, by Viktor Vasnetsov.

Druzhina, Drużyna or Družyna (Russian and Ukrainian: Дружи́на, Druzhýna literally a "fellowship") in the medieval history of Slavic Europe was a retinue in service of a chieftain, also called knyaz. The name is derived from the Slavic word drug (друг) with the meaning of "companion, friend".[1] [2]

In early Rus a druzhina helped the a prince administer his principality and constituted the area’s military force. The first members of a druzhina in Rus Khaganate were the Varangians,[3] whose princes established control there in the 9th century.[4] Soon members of the local Slavic aristocracy as well as adventurers of a variety of other nationalities became druzhinniki. The druzhina organization varied with time and survived in one form or another until the 16th century.[5]

The druzhina was composed of two groups: the senior members, later known as boyars, and the junior members. The boyars were the prince’s closest advisers who also performed higher state functions. The junior members constituted the prince’s personal bodyguard and were common soldiers. Members were dependent upon their prince for financial support, but they served the prince freely and had the right to leave him and join the druzhina of another prince. As a result, a prince was inclined to seek the goodwill of his druzhina by paying the druzhinniki wages, shared his war booty and taxes with them, and eventually rewarded the boyars with landed estates, complete with rights to tax and administer justice to the local population.

At the Battle of Lake Peipus the army of the Novgorod Republic had about 5000 men in all, and around 3000 men in both the cavalry and infantry were part of Alexander Nevsky's druzhina.

Further information: History of Poland during the Piast dynasty

Abraham ben Jacob, who traveled in 961–62 in Central Europe, mentions that the drużyna of Polish Mieszko I had 3000 men, paid by a duke.[6]

Archeological findings at cemeteries in the vicinity of the castle of Ostrów Lednicki, near Poznan, has proven the presence of Norsemen in the area around 10th century, suggesting[says who?] that they played an important part the druzhina of Mieszko I, the de facto founder of the Polish state. Mieszko would later marry his daughter Świętosława (Sigrid) to the Danish king Sweyn Forkbeard. Mieszko's daughter would later give birth to Cnut the Great, king of Denmark, Sweden, Norway and conqueror of England. It is likely that the Polish-Norse relationship was a result of earlier trade and cooperation.[citation needed]

This article incorporates material from the public domain 1906 Brockhaus and Efron Encyclopedic Dictionary.