New York Water Taxi is a water taxi service based in Red Hook, Brooklyn offering commuter and sightseeing service mainly to points along the East River and Hudson River. It is one of several private operators of ferries, sightseeing boats, and water taxis in the Port of New York and New Jersey.

New York Water Taxi operates a fleet of 12 vessels of four distinct types with most of them being named for what the company refers to as "New York's civic heroes".[3] The 67.1-foot (20.5 m) Ed Rogowsky, Gene Flatow, Marian S Heiskell, Sam Holmes, and Seymour B. Durst vessels built from 2005 to 2008 by the Gladding-Hearn Shipbuilding Corporation are capable of carrying up to 149 passengers at a speed of 26 knots. The 53.3-foot (16.2 m) Curt Berger, John Keith, Michael Mann, Mickey Murphy, and Schuyler Meyer Jr. vessels built from 2002 to 2003 by Robert E. Derecktor Connecticut Shipyards, LLC are capable of carrying up to 74 passengers at 24 knots.[4] The 95-foot (29 m) American Princess built in 1988 by Breaux Brothers Enterprises can carry up to 250 passengers, while the 120-foot (37 m) American Princess II is capable of carrying up to 288 passengers.[5] All vessels can sustain massive amounts of abuse from the elements, and every vessel (except for the American Princess and American Princess II, which are monohulled) is a catamaran. 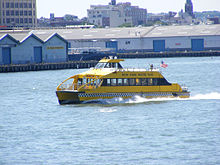 The Ed Rogowsky on the East River near Brooklyn Heights

All services run on weekends and holidays, with NYHarborWay Brooklyn/Manhattan Express Service also provided on Fridays:

Water Taxi Beach at Governor's Island and South Street Seaport is open in conjunction with events at the locations, access provided by ferry.[6]