Cracker Jack
This article is about a brand of snack food. For other uses, see Crackerjack (disambiguation). 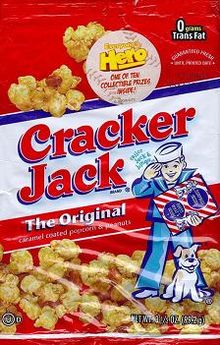 A bag of Frito-Lay's Cracker Jack, featuring Sailor Jack and his dog Bingo.

Cracker Jack is a U.S. brand of snack consisting of strong molasses flavored candy-coated popcorn and peanuts, well known for being packaged with a prize of nominal value inside. Some food historians consider it the first junk food.[1] Cracker Jack is also famous for its connection to baseball lore.

Frederick William Rueckheim and his brother Louis mass-produced an early version of Cracker Jack and sold it at the first Chicago World's Fair in 1893. At the time, it was a mixture of popcorn, molasses, and peanuts and was called "Candied Popcorn and Peanuts".

Rueckheim devised a way to keep the popcorn kernels separate in 1896. As each batch was mixed in a cement-mixer-like drum, a small quantity of oil was added — a closely guarded trade secret. Before this change, the mixture had been difficult to handle, as it stuck together in chunks. In 1896, the first lot of Cracker Jack was produced. It was named by an enthusiastic sampler who remarked, "That's crackerjack!" (a colloquialism meaning "of excellent quality"[2]).

In 1899, Henry Gottlieb Eckstein developed the "waxed sealed package" for freshness, known then as the "Eckstein Triple Proof Package," a dust, germ and moisture-proof paper package. In 1902, the company was re-organized as Rueckheim Bros. & Eckstein.

"Take Me Out to the Ball Game", the song written by lyricist Jack Norworth and set to music by Albert Von Tilzer gave Cracker Jack free publicity when it was released in 1908 with the line "buy me some peanuts and Cracker Jack!"

Prizes were included in every box of Cracker Jack beginning in 1912.[3] The prizes attained pop-culture status with the term "came in a Cracker Jack box," referring to an object of limited value. In recent years, the toy and trinket prizes have been replaced with paper prizes displaying riddles and jokes.

Mascots Sailor Jack and his dog, Bingo, were introduced in 1918 and registered as a trademark in 1919.[citation needed] Sailor Jack was modeled after Robert Rueckheim, grandson of F.W. Rueckheim, the German immigrant who invented the popcorn-peanuts-and-molasses snack, in 1872. Robert died of pneumonia shortly after his image appeared at the age of 8.[4] The sailor boy image acquired such meaning for the founder of Cracker Jack that he had it carved on his tombstone, which can still be seen in St. Henry's Cemetery,Chicago.[5] Sailor Jack's dog Bingo was based on a real-life dog named Russell, a stray dog adopted by Henry Eckstein in 1917 who demanded that the dog be used on the packaging. Russell died of old age in 1930.[6]

The Cracker Jack Company was purchased by Borden in 1964 after a bidding war between Borden and Frito-Lay. Borden sold the brand to Frito-Lay in 1997.[7]

Cracker Jack is best known for its inclusion of small, useless, but amusing prizes. These have included everything from temporary tattoos to decoder rings. The original tagline for Cracker Jack was "Candy coated popcorn, peanuts and a prize," but has since become "Caramel coated popcorn & peanuts" under Frito-Lay. Cracker Jack prizes are sometimes referred to in pop culture, usually in reference to their cheapness or uselessness.

More recently, Cracker Jack ships a small fold-and-tear comic or paper device as its prize. These are punched from sheets, and can be produced much cheaper than small plastic trinkets. This is likely a cost savings measure, similar to the use of a non-recyclable, non-biodegradable bag rather than a cardboard box with a similar foil bag inside.[citation needed]

Vintage Cracker Jack toys are occasionally held by amateur collectors or found for sale on the Internet.