Coat of arms of Slovakia

Coat of arms of Slovakia 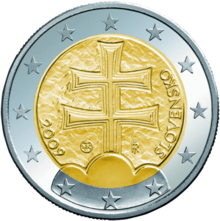 Slovak coat of arms on a Slovak 2 euro coin 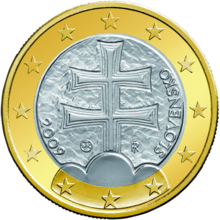 Slovak coat of arms on a Slovak 1 euro coin

The coat of arms of Slovakia consists of a red (gules) shield, in early gothic style, charged with a silver (argent) double cross standing on the middle peak of a dark blue mountain consisting of three peaks. Extremities of the cross are amplificated, and its ends are concaved. The double cross is a symbol of its Christian faith and the hills represent[citation needed] three symbolic mountain ranges: Tatra, Fatra and Mátra (the last one is in northern Hungary). These symbols are very close to the ones used in the Coat of arms of Hungary.

One of the modern interpretations of the double cross is that it represents Slovakia as an heir and guardian of Christian tradition, brought to the region by St. Cyril and St. Methodius, two missionaries from the Byzantine Empire.

The two-barred cross in the Slovak coat of arms originated in the Byzantine (Eastern Roman) Empire in the 9th century. Unlike the Christian cross, the symbolism and meaning of the double cross is not well understood. One interpretation is that the first horizontal line symbolized the secular power and the other horizontal line the ecclesiastic power of Byzantine emperors. Another that the first cross represents the death and the second cross the resurrection of Jesus Christ. In the Byzantine Empire of the 9th century, the double cross was a political symbol used by Byzantine clerks and missionaries.[citation needed]

The double cross arrived in the territory of current-day Slovakia probably no later than during the 9th century mission of Cyril and Methodius to Great Moravia.[citation needed] Though used frequently in Great Moravia, it was not a state symbol at that time, because there were no state symbols in the modern sense in Europe at that time yet. By means of Zwentibold (the ruler of Lorraine, son of the German emperor Arnulf of Carinthia and godchild of the Great Moravian king Svatopluk I), this symbol got to Lorraine and is called the cross of Lorraine there.[citation needed]

The double cross symbol appeared again in rudimentary features on the first coins that Stephen I, the first king of the Kingdom of Hungary (part of which now forms the territory of present-day Slovakia), had minted at an unknown place. Before he became king in 1000, he was the Grand Prince of the Principality of Hungary and was living there with his Bavarian wife Gisella. The frequent opinion that the double cross was a cross that the Pope granted to Stephen I. around 1000 is still disputed. The opinion arose only in the 15th century based on a legend from the 12th century, which in addition only says that Stephen received an apostolic cross (i.e. a normal, not a double cross).

The direct predecessor of the current coat of arms of Slovakia can be found in the coat of arms used by Béla, the prince of the Nitrian frontier principality (1046-1060) and later the king of the Kingdom of Hungary. Béla was a member of the house of Árpáds and was named after the Prague bishop Adalbert[citation needed], who had baptized King Stephen, the cousin of Béla's father, some decades ago. Béla conducted his own internal and international policy in his Nitrian frontier principality. The Byzantine emperor, involved in a quarrel with the Hungarian king, even sent Béla a prince's crown to Nitra. Furthermore, Béla had own coins minted in 1050 in Nitra, the capital of his principality – coins which deliberately differed from those of the Hungarian king and which bore the double cross symbol.[citation needed]

The appearance of the double cross in coins before Béla III is highly disputed. According to recent view It is a simple misinterpretation of two normal crosses.[1]

It was only 100 years later, around 1189, that the double cross is known to have been used again – it was used during a crusade of the Hungarian king Béla III as his royal symbol. The three hills seen in the modern Slovak and Hungarian coats of arms were still not present in the standard. This time, the symbol was already used as a coat of arms, because coats of arms became fashionable in Europe at that time. He chose the symbol, because it was a Christian symbol and because it was the oldest symbol used in his kingdom.

Béla's successors Emeric and Andrew II, however, did not use anymore the double cross, which was associated with the Nitrian frontier principality situated in the northern part of the kingdom and dissolved in 1107, as their symbol, but they used a red-and-white-stripes symbol associated with the new frontier principality created in Croatia and Dalmatia in the end of the 11th century (see the coat of arms of Hungary for a picture).

King Béla IV used the patriarchal cross again – the reasons for this decision are unknown. Some historians suggest that he simply copied Béla III, his ideal, though this is only an assumption. At the time of his rule, the patriarchal cross also became the symbol of the Prešporok (Bratislava) county, although in a slightly modified form. When the Kingdom of Hungary was split in two parts temporarily in 1262, the double cross was used as the symbol for the northern and western part (encompassing present-day Slovakia) and the stripes as the symbol for the other part of the kingdom.

During the throne struggles after 1301, Ladislaus used the double cross as his symbol (see chapter "Three hills" for details), while Charles Robert of Anjou (1307–1342) used a bipartite coat of arms consisting of the Angevin symbol and the above mentioned stripes symbol of King Stephen V, whose daughter Maria Charles Robert had married.

After the Mongol invasion in 1241-1242 many of the newly founded towns in the Kingdom of Hungary received the right to use the royal double cross as their coat of arms. The first, biggest and most towns of the kingdom arose in present-day Slovakia - the part of the kingdom that was characterized by German settlers, extensive mining activities and thus the most advanced economy at that time. It was probably partly due to this use in municipal coats of arm that the double cross became a clear symbol of the northern part of the kingdom again from the 15th century onwards – that part that is known to have been also called Slovakia from the 15th century[citation needed] and Upper Hungary from the 18th century.

The triple peak represents the three mountain ranges Tatra, Matra and Fatra which symbolized the northern mountainous part of the Kingdom of Hungary. (The Tatra and the Fatra ranges are in Slovakia.) This interpretation is probably the oldest and most frequent one – it can be traced back to the 16th century, but stems probably from the 15th century. According to István Werbőczy's "Tripartitum" from 16th century, the heaps represent the mountains in this order.

The three mountains below the double cross were used by King Ladislaus (1301-1305), who was king of Hungary, but was a Czech from the house of the Přemyslids. Since this king was recognized basically only in what is today Burgenland and Slovakia, the three mountains symbolized mountainous present-day Slovakia.[citation needed] Otto of Bavaria (1305-1307), Ladislaus's successor, used this symbol as well – for the same reasons as Ladislaus.[citation needed]

Symbol of the Slovaks

Not later than in the 16th century, the Slovaks regarded the double cross also as a symbol of their nation.[citation needed] This fact manifested itself during the Revolution of 1848/1849, Slovaks were fighting along with the Austrians against the Magyars (Hungarians). A "Slovak National Council" was established for this purpose in August 1848 in Vienna. The present-day coat of arms was used on the seal of this Slovak National Council for the first time officially as the national symbol of the Slovaks (instead of being the official symbol of Upper Hungary only). From that time onwards, the symbol has been used very frequently.

As for the colors, the colors are supposed to be the three "Slavic" colors red-white-blue (Slavic tricolor). Since the Upper Hungary coat of arms was already part of the coat of arms of the Kingdom of Hungary at that time, only the color of the three mountains had to be changed (it happened on the Slovak flag for the first time) from green to "blue" to receive the red-white-blue combination.

As for the origin of the red color (in the Slovak and in the Hungarian coat of arms), the coat of arms has often had the red color as an almost inseparable attendant of the double cross in the coats of many Hungarian and Slovak towns since the Middle Ages. Also, the coat of arms of Béla III. is thought to have had red background. In general, red background color was used frequently for coats of arms in the late 12th and early 13th century in central Europe. One of the modern interpretations of the color is that it represents the bloody lining and symbolizes the Slovak 'martyrdom' during the time of Magyarisation (19th century).[citation needed]

The color of the three mountains was originally (from the 14th century) golden and silver; later it became green, and in 1848, as mentioned above, blue. 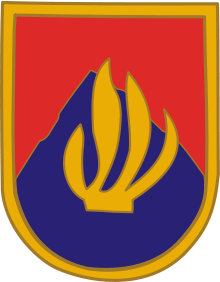 In 1945, it became part of Czechoslovakia's coat of arms again. From 1960 to 1990 the symbol was officially forbidden, because it was interpreted by the Communists as the symbol of the fascist Slovak State. The old coat of arms was replaced in the Czechoslovak coat of arms by an artificial symbol consisting of Mt. Kriváň and three flames. The three flames were supposed to symbolize the Slovak National Uprising of 1944.

On 1 March 1990, after the Velvet Revolution, the old coat of arms became the official symbol of the "Slovak Republic", which was still part of Czechoslovakia. Based on the Constitution of the Slovak Republic of September 3, 1992, the same coat of arms became the symbol of independent Slovakia, which arose on January 1, 1993. A law of February 18, 1993, precised the details of the coat of arms: for example, though not explicitly defined in the coat's blazon in the past, during the WWII era the cross mostly used to be depicted with convex endings of the stake and the bars; therefore the new description clearly reads to depict them as concave.

The coat of arms is used by the Slovak Air Force as its roundel.

Since 1992 the coat of arms is also placed on the Slovak flag.

Part of other symbols 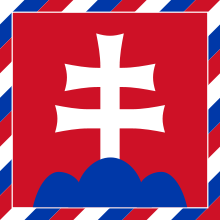 Flag of the President of Slovakia

The President of Slovakia uses a banner of these arms.