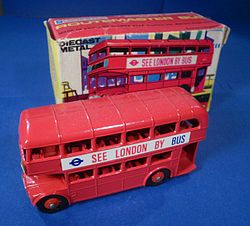 Starting as early as 1939, DCMT manufactured die cast toys for children. The 'Lone Star' name was chosen because of a demand at the time for toy guns and rifles popular in the Western films in cinemas all over Britain (Johnson 1998, 117-118). The company also made tie-in toy guns licensed from the James Bond films and The Man From U.N.C.L.E. TV series.

Other early models included large numbers of hand painted toy soldier figures, mostly military, with some cowboy and Native American examples. Other figures were Thunderball frogmen. Additional figures were licensed from children's series and included Noddy, Popeye and Zorro. Initially the soldiers were made in hollow cast lead, but this was later changed to plastic.

Production may have begun as early as 1939, continuing to 1947 in 'The Bridge Garage', Green Lanes, Palmers Green, London, N.13. Reportedly, from 1941 - 1942 temporary additional premises were opened on Pembroke Road, Muswell Hill, London, N.10. From 1947 - 1956 the 'River Works', 152 Green Lanes, Palmers Green, London, N.13 were in operation. In 1956, a milestone occurred with the move to purpose-built factory of 37,000 sq. at 168 Great North Road, Hatfield, Hertfordshire. In 1958, another factory was acquired at Ambridge, Gower & Mills, Holloways Lane, Welham Green, Hatfield, Hertfordshire. This became the main manufacturing facility through the 1960s.

Competition with Dinky and Corgi

Discovering a Lone Star vehicle and reading its base can be a confusing experience. Some of the Impy Toys read: "Lone Star Road-Master Impy Super Cars" (Ragan 2000, p. 34). To add to the confusion, elsewhere on the base it would usually say DCMT. The nomenclature problem, interpreted another way, produces an amusing image, as one might imagine "Texan street authority fantastic small sly cars (DCMT)". Other 1:50 scale vehicles chassis simply read, "Lone Star Made in England". 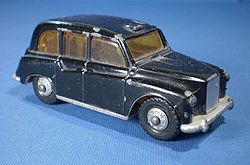 A 1:50 scale Austin FX4 London Taxi. This model simply says "Lone Star Made in England" on the base.

To keep up with competitors such as Corgi and Dinky, Lone Star began producing Corgi-sized diecast toy vehicles in 1956 with its Road-Master series (later spelled without the hyphen, see Ragan 2000, p. 34, also Johnson 1998, p. 118). Castings on the earlier vehicles, though handsome, were a bit cruder than the competition. For example the double-deck bus shown above has its casting line, for its two halves, right down the center of the roof. Also, most earlier Lone Stars have simpler bumper, grille and body detail than Corgi or Dinky. The later Impy series, however, outdid Matchbox by a long shot.

Earlier 1960s models commonly had orange tinted plastic transparent windows, but no interior detail. Head and tail lights were emphasized with silver or red paint. Tires started as rubber, then later in the mid-1960s, switched to hard ribbed black plastic which were advertised as "non-scratch". Perhaps this was supposed to appeal to parents who were afraid junior would mar the furniture with the toys. Wheels were simple aluminum with regular 'squeaky' axle hubs. Lone Star moved fairly quickly in an expanding ranges including the exceptional OO scale (1/76th) vehicles, and, later, the "Lone Star Impy" vehicles, which were uniformly about three and a half inches long (varying between 1:43 and 1:50 scales). Thus like Matchbox, vehicle sizes seemed to adhere more to a particular size than to a particular scale. 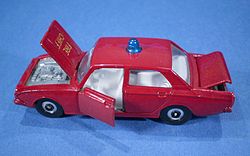 Much changed with the introduction of the Impy line in 1966. Bright new packaging was introduced while the older, larger, Road-Master series was discontinued (though the name "Roadmaster" was still used). The new cars were a smaller three and a half inch size, similar to Mini-Dinkys, and were advertised as the "cars with everything" (Rixon 2005, p. 39). For example, the 1963 Chrysler Imperial was not offered by any other diecast maker and featured opening doors, hood, trunk, working steering and jeweled headlights (Ragan 2000, p. 35). The Impy Jaguar Mark X outshone the spartan Matchbox version with four jeweled headlights and opening 'everything' (Ragan 2000, pp. 48-51). Having so many features on a smaller diecast car could be unsightly, however, as cut door lines broke the smooth sides of the car on the Imperial, and other vehicles. On the FIAT 2300S Ghia coupe the cast line was rough and uneven from fender through door to fender again (Ragan 2000, pp. 25, 48).

It is interesting that Lone Star was the first toy producer to respond to Hot Wheels' hit of low-friction wheels (Rixon 2005, p. 10). In 1968, less than a year after the introduction of Hot Wheels, Impys were refitted with sporty fast wheels which Lone Star now called its "Flyer" series. The first Flyers' wheels were simple shiny silver wheels with black hubs, rather reminiscent of Corgi's first low-friction gold wheels with red hubs. Eventually cars were given a handsome five-spoke wheel (Rixon 2005, p. 54). By contrast, Aurora's Cigarbox cars did not change wheel styles until about 1969, nearly two years after Mattel's premier. Similar to Majorette and others, Lone Star also offered gift sets of cars with trailers into the early 1980s, like the Range Rover pulling a zodiac-style inflatable boat (Rixon 2005, p. 115).

Earlier Lone Star packaging was colored similar to Corgi and especially Dinky, with red and yellow box panels. Later packaging was bright - almost luminescent - and Impy boxes were among the first to feature plastic windows, while Matchbox still had closed boxes (Rixon 2005, p. 39). Mini-Dinky, however, had little red garages that its vehicles came in. The Impy boxes featured a cute little red devil figure that may have been distasteful for some prudish adults. 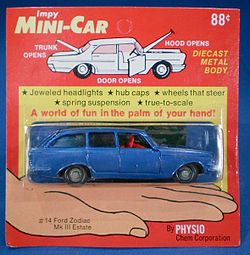 A Lone Star oddity were Impy series cars sold in the United States as "Mini-Cars", packaged by the Physio Chem Corporation in blister packs that showed a hand 'holding' the car in the clear blister (the car in the blister was visible from both sides of the package). Physio Chem was known for clever 'how to' chemistry, magic, detective, and sewing kits, and often packaged toys made in other countries under their name. The cars were standard Lone Star Impys made in England and imported for Physio Chem and packaged in the states. Though the Lone Star name appears nowhere on the package, the bases of the cars are standard Impys and say, "Made in England".

About 1968 or 1969, Lone Star introduced a smaller, approximately 1:85 scale series called "Tuf-Tots" that were simply cast vehicles similar in concept to the small Tootsietoys that did not have opening parts. There were four cars, sixteen trucks, and a couple of other vehicles offered. Cars were a Citroen DS convertible, a '68 Dodge Dart, a Corvette Stingray, and a Mercedes-Benz 280 SL. The first series were all convertibles with plastic drivers in different colors (Tuf-Tots cars webpage). The second series had no driver, rather a plastic black roof. Some vehicles of the series were re-released in the mid-1980s as brightly colored "Zippy Zoomers" and others, like the DS convertible were used by Microlink Industries of Wales in a series named "Mokes" which were tied to a comic book storyline (Lone Star 'Tuf-Tots' webpage). Tuf-Tots really couldn't have been for tots, as they were almost small enough to choke on.

Following the lead of Dinky Toys and French CIJ, Lone Star also started producing diecast model jet liners in 1959 with its 2.5.0 Series (standing for 1:250 scale). Planes featured were American Boeings, like the Pan Am 707, but also notable British models like the Bristol Britannia (with "British & Commonwealth" decals) and the Vickers Viscount. Planes came assembled but unpainted with transfers and paint instructions.

Under the "Lone Star Locos" name, the company produced (OOO scale), 2mm to the foot, British and American outline model push-along-trains in 1957. These utilised 8.25mm gauge metal track and a range of diecast station buildings. This line was designed by long term Lone Star employee Stuart Goss, and followed in 1960 by "Treble-0-Lectric" electrically powered working models of two British diesel locomotives: The Class 24 Sulzer Type 2 diesel, the Class 23 Napier Type 2 "Baby Deltic" diesel, an American Baldwin 0-8-0 Steam Locomotive and an F7 US Diesel Electric loco which was available in both US and Canadian liveries. These were accompanied by track, British & Continental outline rolling stock, scenic items and other accessories, such as the "Gulliver County" range of rubber moulded buildings in 2mm scale. Vacuum-formed bases were available to form "instant" scenic layouts and these could be purchased separately or in sets.

The electric train models were reasonably well received in the Model Railway press of the time (although some felt that the rubber band drive would be somewhat awkward for children to change) and essentially showed that a viable 2mm to the foot system could be designed, manufactured and marketed in the UK. Lone Star Treble-O-Lectric trains essentially introduced the concept that would later become British "N" gauge - 10 years ahead of the competition.

However, limited toy trade distribution, the existence of the Tri-ang TT scale range and poor reliability of the driving mechanisms (which used final drive from a pair of elastic bands) ensured that the Treble-O-Lectric line never sold well enough to pay back the investment. In 1965, production ceased, but the following year a new range of push-along trains - "Treble-O-Trains" - was introduced, using the existing tools, and these were sold in blister packs. The premier outlet was the British High Street retail chain Woolworths. In 1968 the range was rebranded "Impy/Treble-O-Trains" and the term N gauge utilised on the blister pack instead of OOO scale. In 1970 the range was again rebranded as "Lone Star Model Trains" and boxes used instead of blister packs. Unsold stock was apparently finally cleared from the company's Hatfield warehouse during 1988. U.S. Lone Star expert Dallas J. Mallerich was apparently offered any remaining OOO railway stock but the price quoted was too high.

In 1983, the DCMT Group went into Receivership, with new owners, Wicke & Co. GmbH (a German Company) taking over. The Green Lanes factory was sold off, and in 1984, the Holloways Lane buildings were demolished. Toys continued to be made through this period, but in 1988, the Great North Road factory closed. Employees were made redundant as production of many items moved to Hong Kong. In 1989, the Great North Road buildings were demolished.

Today there is a whole new interest in Lone Star as new collectors have begun to take an interest in the marque. A thriving Lone Star collectors circle regularly displays fully working model train layouts solely using Lone Star equipment. These are more popular in the UK, but also exist in Europe & Canada.

In 2009, Lone Star cap guns are once again widely available, as the name and original logo are being used by a German manufacturer with good distribution across Europe.