The Long Land Pattern musket and its derivatives, all .75 caliber flintlock muskets, were the standard long guns of the British Empire's land forces from 1722 until 1838 when they were superseded by a percussion cap smoothbore musket. The British Ordnance System converted many flintlocks into the new percussion system known as the Pattern 1839 Musket. A fire in 1841 at the Tower of London destroyed many muskets before they could be converted. Still, the Brown Bess saw service until the middle of the nineteenth century. Some were used by Maori warriors during the Musket Wars 1820s-1830s, having purchased them from European traders at the time, some were still in service during the Indian rebellion of 1857, and also by Zulu warriors, who had also purchased them from European traders during the Anglo-Zulu War in 1879, and some were sold to the Mexican Army who used them during the Texas Revolution of 1836 and the Mexican-American War of 1846 to 1848. One was even used in the Battle of Shiloh in 1862.[1]

Most male citizens of the American Colonies were required by law to own arms and ammunition for militia duty.[2] The Long Land Pattern was a common firearm in use by both sides in the American Revolutionary War.[3]

One hypothesis is that the "Brown Bess" was named after Elizabeth I of England, but this lacks support. It is not believed that this name was used contemporaneously with the early Long Pattern Land musket but that the name arose in late years of the 18th century when the Short Pattern and India Pattern were in wide use.

Early uses of the term include the newspaper, the Connecticut Courant in April 1771, which said "...but if you are afraid of the sea, take Brown Bess on your shoulder and march.". This familiar use indicates widespread use of the term by that time. The 1785 Dictionary of the Vulgar Tongue, a contemporary work which defined vernacular and slang terms, contained this entry: "Brown Bess: A soldier's firelock. To hug Brown Bess; to carry a fire-lock, or serve as a private soldier." Military and government records of the time do not use this poetical name but refer to firelocks, flintlock, muskets or by the weapon's model designations. 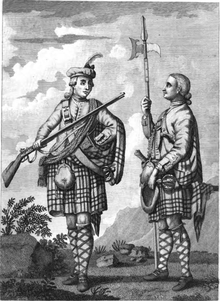 Soldiers of the Black Watch armed with a musket (Brown Bess) and a halberd (Brown Bill), c. 1790.

Popular explanations of the use of the word "Brown" include that it was a reference to either the colour of the walnut stocks, or to the characteristic brown color that was produced by russeting, an early form of metal treatment. Others argue that mass-produced weapons of the time were coated in brown varnish on metal parts as a rust preventative and on wood as a sealer (or in the case of unscrupulous contractors, to disguise inferior or non-regulation types of wood). However, the Oxford English Dictionary (OED) notes that "browning" was only introduced in the early 19th century, well after the term had come into general use.

Similarly, the word "Bess" is commonly held to either derive from the word arquebus or blunderbuss (predecessors of the musket) or to be a reference to Elizabeth I, possibly given to commemorate her death. More plausible is that the term Brown Bess derived from the German words "brawn buss" or "braun buss", meaning "strong gun" or "brown gun"; King George I who commissioned its use was from Germany. The OED has citations for "brown musket" dating back to the early 18th century which refer to the same weapon. Another suggestion is that the name is simply the counterpart to the earlier Brown Bill.

The Long Land Pattern "Brown Bess" musket was the British infantryman's basic arm from about 1740 until the 1830s.

From the 17th to the early years of the 18th century, most nations did not specify standards for military firearms. Firearms were individually procured by officers or regiments as late as the 1740s, and were often custom made to the tastes of the purchaser. As the firearm gained ascendancy on the battlefield, this lack of standardization led to increasing difficulties in the supply of ammunition and repair materials. To address these difficulties, armies began to adopt standardized "patterns". A military service selected a "pattern musket" to be stored in a "pattern room", There it served as a reference for arms makers, who could make comparisons and take measurements to ensure that their products matched the standard.

Stress-bearing parts of the Brown Bess, such as the barrel, lockwork, and sling-swivels, were customarily made of iron, while other furniture pieces such as the butt plate, trigger guard and ramrod pipe were found in both iron and brass. It weighed around 10 pounds (4.5 kg) and it could be fitted with a 17 inches (430 mm) triangular cross-section bayonet. The weapon had no sights, although the bayonet lug on the barrel may have been used in that manner, similar to the bead on a shotgun.

Accuracy of the Brown Bess was fair, as with most other muskets. The effective range is often quoted as 175 yards (160 m), but the Brown Bess was often fired en masse at 50 yards (46 m) to inflict the greatest damage upon the enemy. The combination of large calibre of the projectile and the heavy weight of its iron construction contributed to its low effective range. Military tactics of the period stressed mass volleys and massed bayonet charges, instead of individual marksmanship. The large soft projectile could inflict a great deal of damage when it hit and the great length of the weapon allowed longer reach in bayonet engagements.

Of all of the versions, the India pattern was supposed to be the most accurate with a range of 175 yards and 75 to 95 percent accuracy which at the most would be about 4 inches (10 cm) of aim. As used by the British regiments of the Napoleonic Era, the weapons were quite reliable. As it took about 43 seconds to fire three shots, it became useful for both hunting and battle. The weapon also had a thicker barrel than most contemporary firearms which reduced[citation needed] its chances of blowing up due to powder overload.

Field tests of smoothbore muskets in the late 18th and early 19th centuries reported widely reliable expectations of accuracy and speed of fire. Estimations of rate of fire ranged from "one shot every fifteen seconds" (4 shots per minute) with highly trained troops, to "two to two and a half shots per minute" (one shot every 24 seconds) for inexperienced recruits.

The standard military loading procedure from prepared paper cartridges containing ball and gun powder in an elongated envelope is:

Standard European targets included strips of cloth 50 yards long to represent an opposing line of infantry, with the target height being six feet for infantry and eight feet, three inches for cavalry. Estimations of hit probability at 175 yards could be as high as 75% in volley fire. This however was without allowances for the gaps between the soldiers in an opposing line, for overly tall targets or the confusing and distracting realities of the battlefield. Modern testers shooting from rigid rests, using optimum loads and fast priming powder, report groups of circa five inches at 50 yards (Cumpston 2008).

Many variations and modifications of the standard pattern musket were created over its long history. The earliest version was the Long Land Pattern of 1722, a 62-inch (160 cm) long (without bayonet) and with a 46-inch (120 cm) barrel. It was later found that shortening the barrel did not detract from its accuracy but made handling the musket easier. This resulted in the Militia (or Marine) Pattern of 1756 and the Short Land Pattern of 1768, which both had a 42-inch (110 cm) barrel. Another version with a 39-inch (99 cm) barrel was first manufactured for the British East India Company, and was eventually adopted by the British Army in 1790 as the India Pattern.

Towards the end of the life of the weapon, there was a change in the system of ignition. The flintlock mechanism, which was prone to misfiring, especially in wet weather, was replaced by the more reliable percussion cap. The last flintlock pattern manufactured was selected for conversion to the new system as the Pattern 1839. A fire at the Tower of London destroyed large stocks of these in 1841, so a new Pattern 1842 musket was manufactured. These remained in service until the outbreak of the Crimean War when they were replaced by the Minie and the P53 Enfield rifled musket.

The detail differences between this musket and the standard New Land Pattern were a scrolled trigger guard similar to that of the Baker Rifle except more rounded, a browned barrel and a notch back-sight, the bayonet lug being used as the fore-sight.

In service; 1778–1854; Issued to Royal Navy ships, drawn by men as required, Marines used Sea Service weapons when deployed as part of a ship's company but were issued India Pattern weapons when serving ashore.