MPEG-7 is a multimedia content description standard. It was standardized in ISO/IEC 15938 (Multimedia content description interface).[1][2][3][4] This description will be associated with the content itself, to allow fast and efficient searching for material that is of interest to the user. MPEG-7 is formally called Multimedia Content Description Interface. Thus, it is not a standard which deals with the actual encoding of moving pictures and audio, like MPEG-1, MPEG-2 and MPEG-4. It uses XML to store metadata, and can be attached to timecode in order to tag particular events, or synchronise lyrics to a song, for example.

It was designed to standardize:

The combination of MPEG-4 and MPEG-7 has been sometimes referred to as MPEG-47.[5]

MPEG-7 is intended to provide complementary functionality to the previous MPEG standards, representing information about the content, not the content itself ("the bits about the bits"). This functionality is the standardization of multimedia content descriptions. MPEG-7 can be used independently of the other MPEG standards - the description might even be attached to an analog movie. The representation that is defined within MPEG-4, i.e. the representation of audio-visual data in terms of objects, is however very well suited to what will be built on the MPEG-7 standard. This representation is basic to the process of categorization. In addition, MPEG-7 descriptions could be used to improve the functionality of previous MPEG standards.With these tools, we can build an MPEG-7 Description and deploy it. According to the requirements document,1 “a Description consists of a Description Scheme (structure) and the set of Descriptor Values (instantiations) that describe the Data.” A Descriptor Value is “an instantiation of a Descriptor for a given data set (or subset thereof).” Neither automatic nor semiautomatic feature extraction algorithms are inside the scope of the standard because their standardization isn’t required to allow interoperability.

The MPEG-7 (ISO/IEC 15938) consists of different Parts. Each part covers a certain aspect of the whole specification. 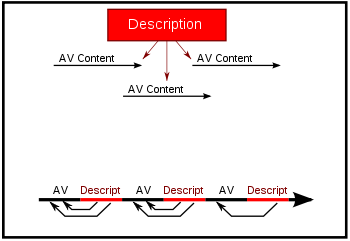 An MPEG-7 architecture requirement is that description must be separate from the audiovisual content.

On the right side you can see this relation between description and content. 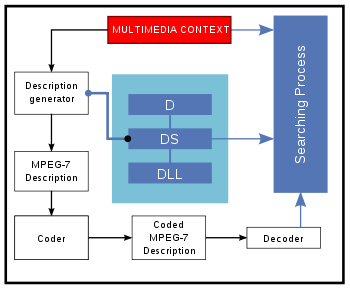 Relation between different tools and elaboration process of MPEG-7

On the right side you can see the relation between MPEG-7 tools.

There are many applications and application domains which will benefit from the MPEG-7 standard. A few application examples are:

Software and demonstrators for MPEG-7