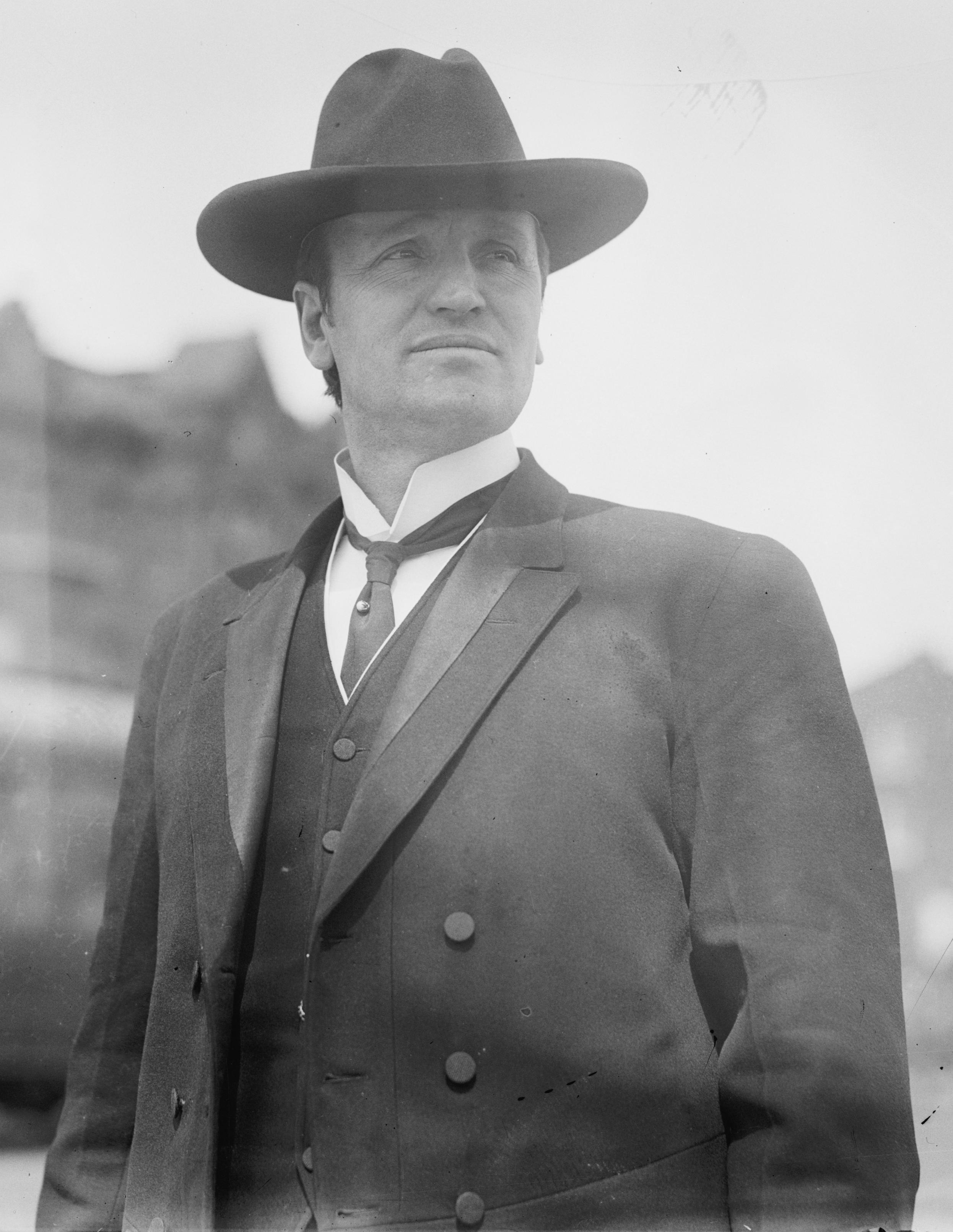 Henry Fountain Ashurst (, &ndash;, ) was an American Democratic and one of the first two Senators from , the other being . Largely self-educated, he served as a and member of the Arizona Territorial legislature before fulfilling his childhood ambition of joining the United States Senate. During his time in the Senate, Ashurst was chairman of the Committee on Indian Affairs and the Judiciary Committee.

Called "the longest U. S. theatrical engagement on record" by "Time",

Ashurst was born on , in a covered wagon near Winnemucca, Humboldt County, to William and Sarah Ashurst. The second of ten children, his family moved to a ranch near Williams, when he was two and he attended school in Flagstaff.

At the age of nineteen, Ashurst was made the turnkey at the county jail in Flagstaff. While woking at the jail, he developed an interest in the law by reading 's "".

In 1904 Ashurst married Elizabeth McEvoy Reno, an Irish-born who had moved with the four children from her first marriage to Flagstaff to establish and manage a station. She served as his political adviser for the rest of her life. Ashurst became a widower on , .

Ashurst was elected to the Territorial House of Representatives in 1897 and when re-elected in 1899 became the territory's youngest speaker. In 1902, he was elected to a term in the territorial senate, and he served as district attorney of from 1905 till 1908 when he moved to .

In 1911, Ashurst presided over the convention that adopted Arizona's state constitution.

With the admission of Arizona into the in 1912, Ashurst was confirmed by the Arizona legislature, alongside , as one the states two new senators. He was sworn into office on , . During his early years in the Senate, Ashurst was a supporter of the administration and served as chairman of the Committee on Indian Affairs between 1914 and 1919. Following his party's loss of control of the Senate in 1919 and White house in 1921 he became a critic of Republican leaders and policy. When his party regained control of the Senate, Ashurst became chairman of the from 1933 till he left the Senate in 1941.

While in office, Ashurst focused on the interests of his constituents. He described this focus with the statement: "You (the people of Arizona) send me to Washington to represent you in the Senate. But you do not send me here because you are interested in grave questions of international policy. When I come back to Arizona, you never ask me questions about such policies; instead, you ask me, 'What about my pension?' or 'What about that job for my sons?'" While he routinely read correspondence from his home state, letters and telegrams from other states were normally ignored.

During reelection campaigns Ashurst employed one of his favorite quotations, "Praise undeserved is scandal in disguise". To this end, his normal technique was to confess his faults and shortcomings to the voters while at the same time glorifying his opponent. During the 1934 elections he even told his constituents "If you don't send me back to the Senate, you'll have an old broken down politician on your hands, and you don't want that."

After five terms in the Senate, Ashurst was defeated in the 1940 elections by during the Democratic primary. Following the defeat he gave a farewell address, the Senate chambers were crowded by both fellow senators and members of the House of Representatives. During the address Ashurst reflected on the experience of defeat saying, "The first half-hour, you image that the earth has slipped from beneath your feat and that the stars above your head have paled and faded, and in your heart you wonder how the Senate will do without you, and how the country will get along without you. But, within another hour, there comes a peace and joy to be envied by the world's greatest philosopher."

Ashurst had an affection for oration as expressed by his statement, "I simply love speaking — just as one may like maple syrup, Beethoven, Verdi, or Longfellow, Kipling, or Shakespeare — one hardly knows why."

Ashurst's loquacious nature developed at an early age. After obtaining copies of several speeches by , a prominent rhetorician of the late 19th century, Ashurst developed his speaking range and ability by thundering the words of other to the plants and rocks of the surrounding countryside. He also read a wide variety of classical and literary sources in an effort to learn as much quotable material as possible. As a result of these early efforts, By the time Ashurst joined Congress he had a well developed speakers voice and a capacious collection of memorized quotations in both English and . To this was added an interest in that aided his vast vocabulary.

Ashurst's most celebrated address came on , when from the senate floor he chastised in harangue labeled by "Time" "one of the most devastating speeches the chamber ever heard".Other notable speeches by Ashurst dealt with Hugo Black's nomination to the , a 1932 proposed tariff on foreign copper, and the 1917 U.S. entry into World War I.

was so fond of Ashurst's speeches that he compiled fourteen into the book "Speeches of Henry Fountain Ashurst of Arizona". Ashurst responded to the book with "But, Barry, I made over 5,000 of them."

Through his legislative career, Ashurst maintained a need to be inconsistent in his political actions. He was also noted for an eccentric and flexible record on a variety of issues. Pride his variable record was such that Ashurst appointed himself of "Dean of Inconsistency" and awarded Degrees of Inconsistency to other members of the senate who displayed irregular voting patterns.For his critics, he usually kept a supply of tracts on his person explaining the virtue and necessity of being inconsistent and awarded these to his detractors when he was criticized for his incongruous nature.

An example of Ashurst's inconsistency is his behavior regarding the . During campaign for 1936 presidential election Ashurst denounced rumors that planned to reorganize the Supreme Court by "whittling, chiseling, indirection, circumlocution, periphrasis, and house-that-Jack-built tactics."

Other examples of Ashurst switching positions include his advocation of being followed by a vote to allow 3.2% beer along with voting both for and against the 18th Amendment.

During his farewell speech in the senate, Ashurst indicated his intention to Arizona with the statement "When you are here worrying about patronage, worrying about committee assignments, worrying about bills, I shall possibly be enjoying the ecstasy of the starry stillness of an Arizona desert night, or enjoying the scarlet glory of her blossoming cactus, and possibly I may be wandering through the Petrified Forest in Arizona."

During retirement Ashurst remained in Washington, devoting his time on classical poetry and public speaking.

Ashurst kept a journal from June 1910 to , which contains pen portraits of several fellow senators. The journal was edited by George F. Sparks and published in 1962 under the title "A Many Colored Toga".