A contrada (plural: contrade) is a district, or a ward, within an Italian city. The most well-known contrade are probably the 17 contrade of Siena that race in the Palio di Siena. Each is named after an animal or symbol and each with its own long history and complicated set of heraldic and semi-mythological associations.

Map of the contrade of Siena, showing their respective banners

In the summer, as excitement for the Palio builds, it is customary for members of the various contrade to dress in ceremonial garb and parade through the city in the Corteo Storico.

These districts were set up in the Middle Ages in order to supply troops to the many military companies that were hired to defend Siena as it fought to defend its independence from Florence and other nearby city states. As time has gone by, however, the contrade have lost their administrative and military functions and have instead become simply areas of localised patriotism, held together by the emotions and sense of civic pride of the residents. Their roles have broadened so that every important event – baptisms, deaths, marriages, church holidays, victories at the Palio, even wine or food festivals – is celebrated only within one's own contrada.

Every contrada has its own museum, fountain and baptismal font, motto, allied contrada (only Oca has no allies) and adversary contrada, typically a neighbor (only four, Bruco, Drago, Giraffa and Selva, have no declared adversaries). Often the adversary contrade share borders.

There were originally 59 contrade, but consolidation over the centuries has seen the number reduced to today's 17. During the seventeenth century some contrade were slowly dying out until their abolition, which took place officially in 1729. These districts were: Gallo (Rooster), Leone (Lion), Orso (Bear), Quercia (Oak), Spadaforte (Strong Sword) e Vipera (Viper). 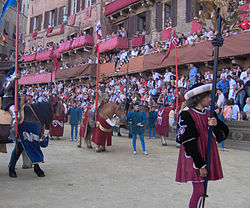 The Corteo Storico Parade for the memory of the Abolished Contrade 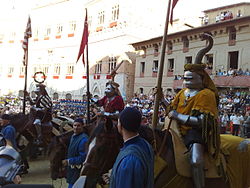 The representatives of Oak, Spadaforte and Viper parade in the Corteo Storico

The abolition of six quarters has always been surrounded by uncertainty. The deletion is traditionally traced to disorders related to the Palio of 1675: according to some because Contrada Spadaforte (with support of five other Contrade), despite the victory of Lupa, claimed the victory for itself; according to others Spadaforte was forbidden to play for the Palio, it can not rely on its actual influence area.[1] The six "rebel" districts were therefore deleted.

This tradition is not supported by contemporary records. The abolition was motivated mainly by poor organization and lack of participation in public life of cities, evidenced in the book of Balia.[2]

The six quarters were officially abolished the edict issued by Violante Beatrice of Bavaria (known as Notice of Violante of Bavaria) in 1729, which marked the boundaries of New Division Contrade still valid. These six were then incorporated into other contrade as follows;

Today the six abolished contrade are remembered in the historical procession preceding the Palio di Siena: six riders with their helmets lowered, accompanied by a groom, parade in the ninth group of the Corteo Storico Historical Parade.

Aquila is situated immediately to the south-west of the Piazza del Campo in the centre of the city, and is home to the duomo (cathedral). Traditionally, its residents were notaries.

Their last victory was on July 3, 1992 (Andrea de Gortes on Vinegar on Floater) and they have had 24 official victories.

Aquila's symbol is a double-headed black eagle holding an orb, a sword and a sceptre. Its colours are yellow, trimmed with blue and black.

Aquila is one of only four nobile (noble) contrade; its title was bestowed by the Habsburg emperor Charles V, out of gratitude for the warm reception he received there in 1536.

The contrada's museum is home to the oldest surviving Palio di Siena banner (also called a palio), which dates from 1719.

Aquila's patron saint is La Vergine (the name of the Most Holy Maria), her titulary festival being celebrated on 8 September.

They are allied to the Civetta (Owl) and Drago (Dragon) contrade. They are opposed to the Pantera (Panther) contrada.

Bruco is situated to the north of the Piazza del Campo. Traditionally, its residents worked in the silk trade.

Bruco's symbol is a crowned caterpillar crawling on a rose. Its colours are green and yellow, trimmed with blue.

Bruco is one of only four nobile (noble) contrade; its title was earned in 1369 by its people's bravery in helping to defeat Charles IV, and consolidated in 1371 when they led the revolt to replace the Sienese council with a people's government.

Its patron Saint is Madonna (Visitation of the Saintest Mary) and the Titulary feast is on 2 July.

It is allied to the Istrice, Nicchio and Torre contrade and not officially opposed to any other contrade since its animosity with neighbouring Giraffa (giraffe) ended.

Chiocciola is situated in the south-western corner of the city. Traditionally, its residents worked as terracotta makers.Its motto, not surprisingly, is “With slow and deliberate steps, snail leaves the battlefield triumphant.” The district’s patron saints are the apostles Peter and Paul with a feast day of June 29. Chiocciola's official enemy is the Tortoise.

Chiocciola's symbol is a snail. Its colours are red and yellow, trimmed with blue. Chiocciola's enemy is the Tortoise. Their last victory was on August 16, 1999.

Civetta is situated immediately to the north of the Piazza del Campo in the centre of the city. Traditionally, its residents were shoemakers.

Civetta's symbol is a crowned owl sitting on a branch. Its colours are red and black striped with white. Its motto is: "Vedo nella Notte" (I see in the night).

For years Civetta was considered the nonna (grandmother) because it had not won a palio for over 30 years. Civetta won the Palio in August 2009, thereby losing the name "nonna".

Drago is situated to the north-west of the Piazza del Campo. Traditionally, its residents were bankers.

Drago's symbol is a flying golden dragon carrying a banner with the letter "u". Its colours are red and green, trimmed with yellow.

Giraffa is an affluent area of the city situated to the north-east of the Piazza del Campo. Traditionally, its residents were painters.

Giraffa's symbol is a giraffe led by a Moor, and a ribbon bearing the motto "Humbertus I dedit" (Umberto I gave it"). Its colours are white and red.

Giraffa has the title of contrada imperiale (imperial contrada). It was bestowed this title by King Vittorio Emanuele III when it won the palio in 1936, the year the race was dedicated to Italy's empire in East Africa.

Istrice's symbol is a porcupine. Its colours are red, white, blue and black. Istrice adversary Contrada is the "Lupa" (She-wolf).

Its motto is: "Sol per difesa io pungo" (I prick only for self-defense).

Istrice has the title of contrada sovrana (sovereign contrada). It was bestowed this title as a result of it headquartering the Sovereign Military Order of Malta during the 14th century.

Leocorno is situated to the east of the Piazza del Campo. Traditionally, its residents were goldsmiths.

Leocorno's symbol is a unicorn, rampant, with the motto "Humberti regio gratia" ("A kingdom by the grace of Umberto"). Its colours are orange and white, bordered with blue.

Lupa is situated to the north of the Piazza del Campo. Traditionally, the residents of Lupa were bakers.

Lupa's symbol is a female wolf nursing twins. Its colors are black and white, trimmed with orange. The she-wolf of this contrada refers to the legend that Siena was founded by Senius, the son of Remus who, along with his twin Romulus, was raised by a wolf. Because of this, Lupa's sister city is Rome.

The Lupa museum's prize exhibit is a photograph of Giuseppe Garibaldi, which he donated to the contrada on its victory in the Palio di Siena of 1867.

Nicchio is situated in the far eastern corner of the city. Traditionally, its residents worked as potters.

Nicchio's symbol is a crowned scallop shell flanked by two branches of coral. Its colours are blue, with yellow and red trim.

Nicchio is one of only four nobile (noble) contrade; it earned its title for bravery shown during the Battle of Montaperti against Florence in 1260, when its soldiers led the attack.

Oca is situated just to the west of the Piazza del Campo. Traditionally, its residents made dyes.

Oca's symbol is a crowned goose wearing around its neck a blue ribbon marked with the cross of Savoy. Its colours are green and white, with red trim.

Oca is one of only four nobile (noble) contrade; it earned its title for its people's bravery during many battles fought by the former Sienese Republic.

The most recent palio win for Oca was in the July 2, 2007 race on Fedora Saura.

Onda runs south from the Piazza del Campo in the centre of the city. Traditionally, its residents were carpenters.

Onda's symbol is a dolphin. Its colours are white and sky blue and the condrada describes itself as "The colour of Heaven, the force of the sea"

Onda has the title of contrada capitana (captain contrada) because in the past its soldiers mounted guard at the Palazzo Pubblico. One of the famous members of Onda was the sculptor Giovanni Duprè, after whom the main street in Onda is named. Onda's adversary is Torre.

Pantera is situated at the western edge of the city. Traditionally, its residents were grocers, chemists and Steamers.

Pantera's symbol is a rampant panther. Its colours are red, blue and white.

Selva runs west from the Piazza del Campo in the centre of the city. Traditionally, its residents were weavers, but when the contrade were mainly military they had a reputation for being excellent archers.

Selva's symbol is a rhinoceros at the base of an oak tree hung with hunting tools. Its colours are green and orange, bordered with white.

Tartuca is situated at the southern end of the city. Traditionally, its residents were sculptors.

Tartuca's symbol is a turtle with alternating Savoy knots and daisies. Its colours are yellow and deep blue.

It is opposed to Chiocciola (snail)

Torre is situated just to the south-east of the Piazza del Campo in the centre of the city, and encompasses Siena's Jewish quarter and synagogue. Traditionally, its residents worked as woolcombers.

Torre's symbol is an elephant (the contrada's original name was Liofante or Lionfante) with a tower on its back. Its colours are crimson, striped with white and blue.

Torre is the enemy of both Onda (wave) and of Oca (goose). It is the only contrada to have two enemies, making it the most contentious contrada in Siena.

Valdimontone (Valley of the Ram)

Valdimontone is situated in the south-east of the city near Porta Romana. Traditionally, its residents were tailors.

Valdimontone's symbol is a crowned rampant ram, with a blue shield emblazoned with the letter "u" for Umberto. Its colours are red and yellow, with white trim.

It is allied with Onda (Wave) and opposed to Nicchio (Shell), its neighbour.