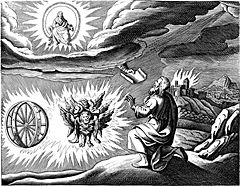 One traditional depiction of the chariot vision, based on the description in Ezekiel.

An Ophan (Lat. ophan[us], pl. ophani[m] from Hebrew אְוּפַּנים) is one of a class of celestial beings called Ophanim described in the Book of Enoch[1] with the Cherubim and Seraphim as never sleeping, but watching (or guarding) the throne of God.

The word ophan means "wheel" in Hebrew so the Ophanim have been associated with the description in Ezekiel 1:15-21 and possibly again in the Daniel 7:9 (mentioned as gagal, traditionally "the wheels of gagallin", in "fiery flame" and "burning fire") of the four, eye-covered wheels (each composed of two nested wheels), that move next to the winged Cherubim, beneath the throne of God. The four wheels move with the Cherubim because the spirit of the Cherubim is in them. These are also referred to as the "many-eyed ones" in the Second Book of Enoch[2].

The Ophanim are also equated as the "Thrones", associated with the "Wheels", in the vision of Daniel 7:9 (Old Testament). They are the carriers of the throne of God, hence the name. However, they may or may not be the same Thrones (Gr. thronos) mentioned by Paul of Tarsus in Colossians 1:16 (New Testament).

These Angelic Princes are often also called "Ofanim, Wheels or Galgallin." It is said that they were the actual wheels of the Lord's Heavenly Chariot (Merkabah). "The four wheels had rims and they had spokes, and their rims were full of eyes round about." They are also frequently referred to as "many-eyed ones."

The 'thrones'; also known as 'ophanim' (offanim) and 'galgallin', are creatures that function as the actual chariots of God driven by the cherubs. They are characterized by peace and submission; God rests upon them. Thrones are depicted as great wheels containing many eyes, and reside in the area of the cosmos where material form begins to take shape. They chant glorias to God and remain forever in his presence. They mete out divine justice and maintain the cosmic harmony of all universal laws.[3]

Maimonides lists Ophanim as occupying the second of ten ranks of angels in his exposition of the Jewish angelic hierarchy.

Ophanim are mentioned in the kel adon prayer, often sung by the congregation, as part of the traditional Shabbat morning service.

Thrones in the Catholic Church

De Coelesti Hierarchia refers to the Thrones (from the Old Testament description) as the third Order of the first sphere, the other two superior orders being the Cherubim and Seraphim. It is mentioned that "The name of the most glorious and exalted Thrones denotes that which is exempt from and untainted by any base and earthly thing, and the super mundane ascent up the steep. For these have no part in that which is lowest, but dwell in fullest power, immovably and perfectly established in the Most High, and receive the Divine Immanence above all passion and matter, and manifest God, being attentively open to divine participations."

Lords of the Flame in the Western Wisdom Teachings

The Rosicrucian Cosmo-Conception refers that the "Lords of the Flame", the Hierarchy of Elohim astrologically assigned to Leo, are the Thrones (from the Old Testament description, "because of the brilliant luminosity of their bodies and their great spiritual powers."); the other two superior hierarchies being also the Cherubim and Seraphim. According to this teaching, these three Hierarchies have already reached liberation, and thus are no longer active in the work of evolution.