Provincial Trunk Highway 1 (PTH 1) is the Manitoba section of the Trans-Canada Highway mainline route. It is a heavily used, 4-lane divided highway, with the exception of a short 18 km section in the southeastern corner of the province. It is the main link between southern Manitoba's largest cities, and also serves as the province's main transportation link to the neighbouring provinces of Saskatchewan (to the west) and Ontario (to the east). The highway is the only major east-west divided highway in Manitoba, and carries a large majority of east-west traffic within and through the province. It has full freeway status sections at Portage La Prairie and Winnipeg. The total distance of the Trans-Canada Highway in Manitoba is 490 km (300 mi).

Manitoba Highway 1 is a very important part of the national highway system in Canada, as it is the sole highway linking the eastern and western regions of the country. It is the only road that links the province of Manitoba with the province of Ontario, making it a major section of Canada's primary commercial and leisure route for all traffic travelling between Canada's largest cities, from Toronto and Montreal in the east to Calgary and Vancouver in the west. 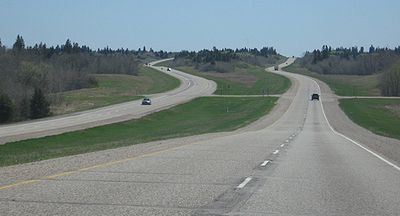 Eastbound on the Trans Canada Highway in south-western Manitoba near Carberry.

The highway is routed from west to east across the province of Manitoba. It begins at the western provincial border with Saskatchewan, connecting with Saskatchewan's Highway 1 to become Manitoba Trans-Canada 1. The highway is designated as T-C 1 throughout Manitoba until it reaches the eastern provincial border with Ontario, where it continues as the main route to Kenora, Ontario and the rest of Eastern Canada as Highway 17.

The entire length of the Trans-Canada Highway in the province of Manitoba is a 4-lane divided highway, with the exception of the Winnipeg city route and an 18 kilometre section in eastern Manitoba between the town of Falcon Lake and the Manitoba-Ontario provincial border which is a two-lane highway.

Manitoba PTH 1 has full expressway status on the routes around Winnipeg on the Perimeter Highway, and around Portage La Prairie. Plans do exist to bring the entire length of Highway 1 (except the Winnipeg city route) to full expressway status in the future (mentioned at the list of Manitoba expressways). Currently, exit numbers only exist at two interchanges,[citation needed] and only small sections of Highway 1 and the Perimeter Highway have freeway status.

In the Winnipeg metro area, the Trans-Canada Highway has two official routes. The main route passes directly through the city of Winnipeg on city streets, entering the city from the west and continuing along Portage Avenue, Broadway, Main Street, Queen Elizabeth Way, St.Mary's Road, St.Anne's Road, and Fermor Avenue where it re-joins the Perimeter Highway (T-C 100) and continues east on TC 1. An alternate routing exits the main T-C 1 route on the western edge of Winnipeg onto the Perimeter Highway (T-C 100), which by-passes the city completely. The Perimeter Highway is a ring road which encircles Winnipeg and is frequently used by commuters and through traffic on the Trans Canada Highway wishing to avoid congested city streets.

The first provincial trunk highways in Manitoba were numbered in 1926.[1] The original highway 1 was one of nine highways fanning out from Winnipeg, but was different in that it fanned out from the west and the east. Highway 1 was routed via many already-existing highways and provincial secondary roads. (From west to east), these are [2][3][4]: 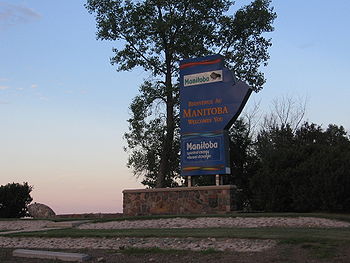 The "Welcome to Manitoba" sign, entering Manitoba from Saskatchewan at the provincial border on TCH 1.

By the early 1950s, Highway 1 had become an important east-west route in all of the western provinces. Most of the provincial highways that Highway 1 originally traversed on were re-numbered and designated as Highway 4 in the mid-1960s, and the #1 was relocated to its present route. In 1962, the Trans-Canada Highway in Manitoba was fully completed, and Highway 1 across all of the western provinces was incorporated as part of the Trans-Canada Highway.

In 1955, most intra-city traffic in the Winnipeg area was diverted onto the (then) newly-built Perimeter Highway. Later that year, the Perimeter Highway's southern (PTH 100) section was merged with the Trans-Canada Highway system, due to the amount of traffic using it to bypass the city. That section of the highway was highly used, and still is today.

On October 6, 2006 the Trans-Canada Highway Portage La Prairie by-pass was closed due to a structural defect found in the bridge over the CN Rail Line. On October 31, 2007, a $19 million project to rebuild the bridge was completed, and the by-pass was fully re-opened to traffic.

On October 25, 2007, a major federal/provincial construction project twinning the highway in western Manitoba between the Saskatchewan-Manitoba provincial border and the town of Hargrave was completed, with 34 kilometres (21 mi) of newly divided highway lanes opened to traffic.

On April 9, 2008, the Government of Manitoba announced that construction of a new interchange will begin in the summer of 2008 at the intersection of Highway 16 (the Yellowhead Highway) and the Trans Canada Highway mainline route, located a short distance west of Portage la Prairie.[5]

On February 27, 2008 the Manitoba Highway Traffic Board approved a request by the Government of Manitoba to raise the speed limit on the Trans Canada Highway in Manitoba to 110 km/h along the section between the Saskatchewan-Manitoba border and Winnipeg.[6] The speed limit was officially raised on July 1, 2009, though it was only raised on one portion of the highway between the Saskatchewan border to Virden.[7] The remainder of the highway is still at 100 km/h, but this may change in the future.

Westbound driving from Kenora, Ontario to Winnipeg, near Lorette (East of Winnipeg)

(Major roads only, as there are many local roads PTH 1 intersects.)