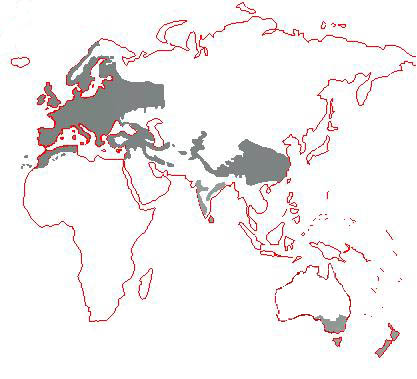 range_map_width = 250px
range_map_caption =Approximate distribution shown in greyThe Blackbird, Common Blackbird or Eurasian Blackbird ("Turdus merula") is a species of true thrush which breeds in , , and , and has been introduced to and . It has a number of across its large range; a few of the Asian subspecies are sometimes considered as full species. Depending on , the Blackbird may be resident, partially migratory or fully migratory.

The male of the nominate subspecies, which is found throughout most of Europe, is all black except for a yellow eye-ring and bill and has a wide range of vocalisations; the adult female and juvenile have mainly brown . This species breeds in woods and gardens, building a neat, mud-lined, cup-shaped nest. It is , eating a wide range of s, s, berries, and s.

Both sexes are territorial on the breeding grounds, with distinctive threat displays, but are more gregarious during migration and in wintering areas. Pairs will stay in their territory throughout the year where the climate is sufficiently . This common species has given rise to a number of literary and cultural references, frequently related to its melodious song.

It may not immediately be clear why the name "Blackbird", first recorded in 1486, was applied to this species, but not to one of the various other common black British birds, such as the , Raven, Rook or . However, in Old English, and in up to about the 18th century, "bird" was used only for smaller or young birds, and larger ones such as crows were called "fowl". At that time, the Blackbird was therefore the only widespread and conspicuous "black bird" in the British Isles.

The family of the New World is sometimes called the blackbird family because of some species' superficial resemblance to the Old World thrushes, especially this species, but they are not evolutionarily close, being closer to the s and s.

As would be expected for a widespread passerine bird species, several geographical subspecies are recognised. The treatment of subspecies in this article follows Clement "et al" (2000).

The taxonomy, especially of the Asian , is complex. The subspecies from most of the , "simillimus", "nigropileus", "bourdilloni", "spencei", and "kinnissi", are small, only 19–20 centimetres (7.5–8 in) long, and have broad eye-rings. They also differ in proportions, wing formula, egg colour and voice from the other subspecies of the Blackbird. They are therefore sometimes considered a separate species, the Indian Blackbird ("T. simillimus").

In Europe, the Blackbird can be confused with the paler-winged first-winter ("Turdus torquatus") or the superficially similar ("Sturnus vulgaris").

The Blackbird breeds in temperate , , the , and . It has been introduced to Australia and New Zealand.

Common over most of its range in woodland, the Blackbird has a preference for deciduous trees with dense undergrowth. However, gardens provide the best breeding habitat with up to 7.3 pairs per hectare (nearly three pairs per acre), with woodland typically holding about a tenth of that density, and open and very built-up habitats even less.

This widespread species has occurred as a vagrant in many locations in Eurasia outside its normal range, but records from are normally considered to involve escapees, including, for example, the 1971 bird in .

The Blackbird has an extensive range, estimated at 10 million square kilometres (3.8 million square miles), and a large population, including an estimated 79 to 160 million individuals in Europe alone. The species is not believed to approach the thresholds for the population decline criterion of the IUCN Red List (i.e., declining more than 30% in ten years or three generations), and is therefore evaluated as .

The Blackbird was introduced to Australia at in the 1850s, but has expanded from its initial foothold in Melbourne and to occur throughout south-eastern Australia, including and the islands.

The introduced Blackbird is, together with the native ("Zosterops lateralis"), the most widely distributed avian seed disperser in New Zealand. Introduced there along with the ("Turdus philomelos") in 1862, it has spread throughout the country up to an elevation of convert|1500|m|ft|0, as well as outlying islands such as the Campbell and Kermadecs.

The male Blackbird defends its breeding territory, chasing away other males or utilising a "bow and run" threat display. This consists of a short run, the head first being raised and then bowed with the tail dipped simultaneously. If a fight between male Blackbirds does occur, it is usually short and the intruder is soon chased away. The female Blackbird is also aggressive in the spring when it competes with other females for a good nesting territory, and although fights are less frequent, they tend to be more violent.

The bill’s appearance is important in the interactions of the Blackbird. The territory-holding male responds more aggressively towards models with orange bills than to those with yellow bills, and reacts least to the brown bill colour typical of the first-year male. The female is, however, relatively indifferent to bill colour, but responds instead to shinier bills.

As long as winter food is available, both the male and female will remain in the territory throughout the year, although occupying different areas. Migrants are more gregarious, travelling in small flocks and feeding in loose groups in the wintering grounds. The flight of migrating birds comprises bursts of rapid wing beats interspersed with level or diving movement, and differs from both the normal fast agile flight of this species and the more dipping action of larger thrushes.

The male Blackbird attracts the female with a courtship display which consists of oblique runs combined with head-bowing movements, an open beak, and a "strangled" low song. The female remains motionless until she raises her head and tail to permit copulation.

Nominate "T. merula" may commence breeding in March, but eastern and Indian races are a month or more later, and the introduced New Zealand birds start nesting in August.

Montane subspecies, such as "T. maximus" have a shorter breeding season, smaller clutches (2–4 eggs, averaging 2.86), but larger eggs than "merula". They produce just one brood per year, and have a slightly shorter incubation period of 12–13 days, but a longer nestling period (16–18 days).

The first-year male Blackbird of the nominate race may start singing as early as late January in fine weather in order to establish a territory, followed in late March by the adult male. The male's song is a varied and melodious low-pitched fluted warble, given from trees, rooftops or other elevated perches mainly in the period from March to June, sometimes into the beginning of July. It has a number of other calls, including an aggressive "seee", a "pook-pook-pook" alarm for terrestrial predators like cats, and various "chink" and "chook, chook" vocalisations. The territorial male invariably gives "chink-chink" calls in the evening in an (usually unsuccessful) attempt to deter other Blackbirds from roosting in its territory overnight.

At least two subspecies, "T. m. merula" and "T. m. nigropileus", will mimic other species of birds, cats, humans or alarms, but this is usually quiet and hard to detect. The large mountain races, especially "T. m. maximus", have comparatively poor songs, with a limited repertoire compared with the western, peninsular Indian and Sri Lankan taxa.

The Blackbird is , eating a wide range of s, s, seeds and berries. It feeds mainly on the ground, running and hopping with a start-stop-start progress. It pulls earthworms from the soil, usually finding them by sight, but sometimes by hearing, and roots through leaf litter for other s. Small s such as frogs, tadpoles and lizards are occasionally hunted. This species will also perch in bushes to take berries and collect s and other active insects.

The main predator of the Blackbird is the domestic , but es and predatory birds, such as the Sparrowhawk and other s, also take this species when the opportunity arises.

This species is occasionally a host of parasitic s, such as the ("Cuculus canorus"), but this is minimal because the Blackbird recognizes the adult of the parasitic species and its non-mimetic eggs.

As with other passerine birds, parasites are common. 88% of blackbirds were found to have intestinal parasites, most frequently "" and "Capillaria" species. [ Misof, Katharina (2005) " [http://deposit.ddb.de/cgi-bin/dokserv?idn=978109996&dok_var=d1&dok_ext=pdf&filename=978109996.pdf Eurasian Blackbirds (Turdus merula) and their gastrointestinal parasites: A role for parasites in life-history decisions?] " "Doctoral dissertation", Bonn, August 2005] and more than 80% had haematozoan parasites. [ Hatchwell, B. J.; Wood; Anwar, M. J. M.; Perrins C. M. (2000) " [http://rparticle.web-p.cisti.nrc.ca/rparticle/AbstractTemplateServlet?journal=cjz&volume=78&year=&issue=&msno=z99-228&calyLang=fra The prevalence and ecology of the haematozoan parasites of European blackbirds, Turdus merula] " "Canadian. Journal of Zoology". 78(4): 684–687 (2000) | doi:10.1139/cjz-78-4-684] Blackbirds spend much of their time looking for food on the ground where they can become infested with ticks, which are external parasites that most commonly attach to the head of a Blackbird.

The Blackbird was seen as a sacred though destructive bird in Classical Greek folklore, and was said to die if it consumed .

Sing a song of sixpence,
A pocket full of rye;
Four and twenty blackbirds baked in a pie!
When the pie was opened the birds began to sing,
Oh wasn't that a dainty dish to set before the king?

The Blackbird's melodious, distinctive song is the theme of the poem "Adelstrop" by Edward Thomas;

And for that minute a blackbird sang
Close by, and round him, mistier,
Farther and farther, all the birds
Of Oxfordshire and Gloucestershire.

The song is also recalled in the Beatles track "Blackbird":

Blackbird singing in the dead of night,
Take these broken wings and learn to fly
All your life,
You were only waiting for this moment to arise.

The Blackbird, unlike many black creatures, is not normally seen as a symbol of bad luck,

The Blackbird is the national bird of ,