The Office of Censorship was an emergency wartime agency set up on December 19, 1941 to aid in the censorship of all communications coming into and going out of the United States. 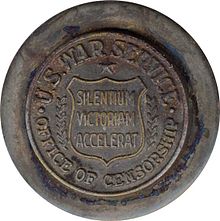 Employee pin of WWII US War Service, Office of Censorship. The words on the shield in the center read Silentium Victoriam Accelerat (Latin: "Silence Speeds Victory," the motto of the Office

Government records show that the First War Powers Act, approved on December 18, contained broad grants of Executive authority for the prosecution of the war, including a provision for censorship. The next day President Franklin D. Roosevelt signed Executive Order 8985, which established the Office of Censorship and conferred on its director the power to censor international communications in "his absolute discretion."

The order also set up a Censorship Policy Board to advise the director with respect to policy and the coordination and integration of censorship activities, and authorized the director to establish a Censorship Operating Board that would arrange for the use by other Government agencies of information acquired through the interception of communications. To effect a closer correlation of censorship activities, representatives of Great Britain, Canada, and the United States signed an agreement providing for the complete exchange of information among all concerned parties and the creation of a central clearinghouse of information within the headquarters of the Office of Censorship.

Byron Price, a newspaperman of long experience and acting general manager of the Associated Press, was appointed Director of Censorship and remained in that office throughout the agency's existence. He immediately began to organize his agency, utilizing existing facilities of the War Department and Navy Department wherever possible. On March 15, 1942, Army and Navy personnel engaged in censorship activities were formally transferred from the War Department and Navy Department to the Office of Censorship. As the military situation continued to improve, plans for adjustment and eventual cessation of all censorship were devised. An X-plan was issued, giving in detail the steps to be taken for reduction of operations and personnel after the defeat of Germany. All censorship activities ceased on August 15, 1945, the day after Japan's acceptance of Allied surrender terms, and the demobilization of the Office of Censorship proceeded on schedule according to another plan devised months before, called the "V-J Book." By Executive Order 9631 the Office of Censorship was formally abolished as of November 15, 1945.

After the announcement of the end of censorship in August 1945, Price was photographed posting on the door of his office a sign that read: Out of Business. He told the press and broadcasters, "You have the thanks and appreciation of your government."

The Code of Wartime Practices

The Code of Wartime Practices for press and radio set forth in simple terms subjects that contained information of value to the enemy and which, therefore, should not be published or broadcast in the United States without authorization by a qualified government source. The Office of Censorship did not undertake to suppress the publication or broadcast of anything that was given out officially by a qualified government authority, even when the information violated one of the code's restrictions. Censorship of information circulating within the United States was on a voluntary basis. However, the information became subject to border censorship when it was offered for transmission outside of the country.

Censorship of the atomic bomb

The Washington Post called the Manhattan Project "super hush-hush" and Byron Price's "chief headache." Price himself called the project World War II's "best-kept secret"[citation needed]. The New York Times was first to report on the specifics of the Manhattan Project on August 7, 1945, saying the atomic bomb was built in "three 'hidden cities' with a total population of 100,000 inhabitants." The sites were at Oak Ridge, Tennessee; Los Alamos, New Mexico; and Hanford, Washington. "None of the people, who came to these developments from homes all the way from Maine to California, had the slightest idea of what they were making in the gigantic Government plants they saw around them," the New York Times said.

The Office of Censorship helped keep the Manhattan Project secret from its inception until the first bomb was dropped on Hiroshima by urging officials involved in the project to keep quiet and by asking the press and broadcasters to voluntarily censor information they learned about atomic energy or the project. As the Manhattan Project neared its crucial test and before the atomic bombings of Hiroshima and Nagasaki, censorship officials sent out a confidential memo to editors and broadcasters on May 15, 1945, requesting continued vigilance in the censorship of:

"Scientific experiments.--The Code of Wartime Practices requests that nothing be published or broadcast about 'new or secret military weapons...experiments.' In extension of this highly vital precaution, you are asked not to publish or broadcast any information whatever regarding war experiments involving: Production or utilization of atom smashing, atomic energy, atomic fission, atomic splitting, or any of their equivalents; the use for military purposes of radium or radioactive materials, heavy water, high voltage discharge equipment, cyclotrons; the following elements or any of their compounds--polonium, uranium, ytterbium, hafnium, protactinium, radium, rhenium, thorium, deutrium."

That was not the first request for voluntary censorship of atomic-related information. Price noted in comments to reporters after the end of censorship that some 20,000 news outlets had been delivered similar requests. For the most part censors were able to keep sensitive information about the Manhattan Project from being published or broadcast. Slips of the tongue occurred with individuals knowledgeable about the project. The press itself was never responsible for publishing more than passing references to the project, except one article in the Cleveland Press entitled "Forbidden City," which detailed a secret project near Santa Fe, New Mexico, calling it "Uncle Sam's mystery town directed by scientist Einstein."