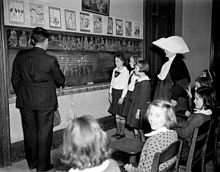 The Juilliard Chamber Orchestra. While lessons are often individual (one teacher and one student), group lessons or coaching sessions are also done.

Music lessons are a type of formal instruction in playing a musical instrument or singing. Typically, a student taking music lessons meets a music teacher for one-on-one training sessions ranging from 30 minutes to one hour in length over a period of weeks or years. For vocal lessons, teachers show students how to sit or stand and breathe, and how to position the head, chest, and mouth for good vocal tone. For instrument lessons, teachers show students how to sit or stand with the instrument, how to hold the instrument, and how to manipulate the fingers and other body parts to produce tones and sounds from the instrument. Music teachers also assign technical exercises, musical pieces, and other activities to help the students improve their musical skills. While most music lessons are one-on-one (private), some teachers also teach groups of two to four students (semi-private lessons), and, for very basic instruction, some instruments are taught in large group lessons, such as piano and acoustic guitar. Private lessons can also take place through live video chat using webcam and Videotelephony.[1]

Music lessons are part of both amateur music instruction and professional training. In amateur and recreational music contexts, children and adults take music lessons to improve their singing or playing skills and learn basic techniques. In professional training contexts, such as music conservatories, university music performance programs (e.g., Bachelor of music, Master of music, DMA, etc), students take a music lesson once a week for an hour or more with a music professor over a period of years to learn advanced playing or singing techniques. Many instrumental performers and singers, including a number of music celebrities, have learned "by ear", especially in folk music styles such as blues and popular styles such as rock music. Nevertheless, even in folk and popular styles, a number of performers have had some type of music lessons, such as meeting with a vocal coach or getting childhood instruction in an instrument such as piano. 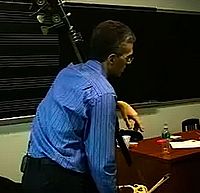 For vocal lessons, teachers show students how to sit or stand and breathe, and how to position the head and mouth for good vocal tone. For instrument lessons, teachers show students how to sit or stand with the instrument, how to hold the instrument, and how to manipulate the fingers and other body parts to produce tones and sounds from the instrument. For wind and brass instruments, the teacher shows the student how to use their lips, tongue, and breath to produce tones and sounds. For some instruments, teachers also train students in the use of the feet, as in the case of piano or other keyboard instruments that have damper or sustain pedals on the piano, the pedal keyboard on a pipe organ, and some drums and cymbals in the drum kit such as the bass drum pedal and the hi-hat cymbal pedal. In addition to teaching fingering, teachers also provide other types of instruction. A guitar player learns how to strum and pluck strings; players of wind instruments learn about breath control and embouchure, and singers learn how to make the most of their vocal cords without hurting the throat or vocal cords.

Teachers also show students how to achieve the correct posture for most efficient playing results. For all instruments, the best way to move the fingers and arms to achieve a desired effect is to learn to play with the least tension in your hands and body. This also prevents forming habits which may lead to injuries resulting from incorrect use of the skeletal frame and muscles. For example, when playing the piano, "fingering" — that is, which fingers to put on which keys—is a skill slowly learned as the student advances, and there are many standard techniques which a teacher can pass on.

There are many myths and misconceptions among music teachers, especially in the Western classical tradition, about "good" posture and "bad" posture. Students who find that playing their instruments causes them physical pain should bring this to their teachers' attention. It is a potentially serious, if often overlooked aspect of learning to play an instrument. Learning to use one's body in a manner consistent with the way their anatomy is designed to work can mean the difference between a crippling injury and a lifetime of enjoyment. Many music teachers would caution students about taking "no pain, no gain" as an acceptable response from their music teacher regarding a complaint of physical pain. Concerns about use-related injury and the ergonomics of musicianship have gained more mainstream acceptance in recent years. Musicians have increasingly been turning to medical professionals, physical therapists, and specialized techniques seeking relief from pain and prevention of serious injury. There exist a plurality of special techniques for an even greater plurality of potential difficulties. The Alexander Technique is just one example of these specialized approaches.

In order to more fully understand the music being played, the student must learn about the underlying music theory. Along with reading musical notation, students learn rhythmic techniques like controlling tempo and recognizing time signatures, as well as the theory of harmony, including chords and key signatures. In addition to basic theory, a good teacher will stress musicality, or how to make the music sound good. This includes tone, phrasing, and proper use of dynamics.

Most music lessons include some instruction in the history of the type of music that the student is learning. When a student is taking western classical music lessons, music teachers often spend some time explaining the different eras of western classical music, such as the Baroque era, the Classical era, the Romantic era, and the Modern era, because each era is associated with different styles of music and different performance practice techniques. Instrumental music from the Baroque era is often played in the 2000s as teaching pieces for piano students, string instrument players, and wind instrument players. If students just try to play these Baroque pieces by reading the notes from the score, they might not get the right type of interpretation. However, once a student learns that most Baroque instrumental music was associated with dances, such as the gavotte and the sarabande, and keyboard music from the Baroque era was played on the harpsichord or the pipe organ, a modern-day student is better able to understand how the piece should be played. If, for example, a cello player is assigned a gavotte that was originally written for harpsichord, this gives the student insight in how to play the piece. Since it is a dance, it should have a regular, clear pulse, rather than a Romantic era-style shifting tempo rubato. As well, since it was originally written for the harpsichord, a light-sounding keyboard instrument in which the strings are plucked with quills, this suggests that the notes should be played relatively lightly, and with spaces between each note, rather than in a full-bodied, sustained legato.

Although not universally accepted, many teachers drill students with the repetitive playing of certain patterns, such as scales, arpeggios, and rhythms. Scales are often taught because they are the building blocks of melody in most Western art music. In addition, there are flexibility studies, which make it physically easier to play the instrument. There are sets of exercises for piano designed to stretch the connection between fourth and fifth fingers, making them more independent. Brass players practice lip slurs, which are unarticulated changes in embouchure between partials. Woodwind players (Saxophone, Clarinet, and Flute) have a multitude of exercises to help with tonguing techniques, finger dexterity, and tone development.[2] Entire books of etudes have been written to this purpose.

The teacher will give the student a set of pieces of slowly increasing difficulty. Besides using pieces as an aid to teaching various elements of playing style, a good teacher will also inspire more intangible qualities such as expressiveness and musicianship. Pieces are more enjoyable for most students than theory or scales, and an emphasis on pieces is usually required to maintain motivation. However, the teacher must not give in to the student's desire for "fun" pieces. Often the student's idea of such is popular vocal selections, movie soundtracks, etc. The pieces that one plays should challenge and tone a persons skills. The student should learn something from every piece he/she plays. In addition, in order for a student to be well rounded he/she must play many types of pieces by many different composers from different eras. A varied library of repertoire will increase the student's musical understanding and skill.

A popular measure of progress, especially for children, is external assessment of the progress of the pupil by a regular examination. There are a number of exam boards which offer the chance for pupils to be assessed on either music theory or practice. These are available for almost every musical instrument.One common way to mark progress is to have graded examinations, for example from grade 1 (beginner) to grade 8 (ready to enter higher study at music school). Some teachers prefer other methods of target-setting for their pupils. The most common is the pupil's concert, which gives experience in playing in public and under a certain degree of pressure, without outright criticism or a more or less arbitrary marking system. Another is the graded system of books followed by teachers of the Suzuki method, in which the completion of each book is celebrated, without a system of marking or ranking of pupils. 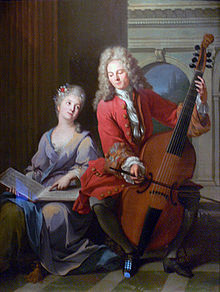 Some studies suggests that music lessons provide children with important developmental benefits beyond simply the knowledge or skill of playing a musical instrument. Research suggests that musical lessons may enhance intelligence and academic achievement, build self-esteem and improve discipline. A recent Rockefeller Foundation Study found that music majors have the highest rate of admittance to medical schools, followed by biochemistry and the humanities. On SAT tests, the national average scores were 427 on the verbal and 476 on math. At the same time, music students averaged 465 on the verbal and 497 on the math - 38 and 21 points higher, respectively. However, the observed correlation between musical and mathematical ability may be inherent rather than acquired. Furthermore, it is possible that the correlation between taking music lessons and academic ability exists because both are strongly correlated with parental income and education. Even if music lessons had no impact on academic ability, one would expect to see a correlation between music lessons and academic ability.

Skills learned through the discipline of music may transfer to study skills, communication skills, and cognitive skills useful in every part of a child's studies at school, though. An in-depth Harvard University study found evidence that spatial-temporal reasoning improves when children learn to make music, and this kind of reasoning improves temporarily when adults listen to certain kinds of music, including Mozart (Rauscher, Shaw & Ky, 1993). This finding which has been named "The Mozart effect" suggests that music and spatial reasoning are related psychologically (i.e., they may rely on some of the same underlying skills) and perhaps neurologically as well. However, there has been considerable controversy over this as later researchers have failed to reproduce the original findings of Rauscher (e.g. Steele, Bass & Crook, 1999), questioned both theory and methodology of the original study (Fudis & Lembesis 2004) and suggested that the enhancing effects of music in experiments have been simply due to an increased level of arousal (Thompson, Schellenberg & Husain, 2001).

A relationship between music and the strengthening of math, dance, reading, creative thinking and visual arts skills has also been reported in literature. (Winner, Hetland, Sanni, as reported in The Arts and Academic Achievement - What the Evidence Shows, 2000) However recent findings by Dr. Levitin of McGill University in Montreal, Canada, undermines the suggested connection between musical ability and higher math skills. In a study conducted on patients with Williams Syndrome (a genetic disorder causing low intelligence), he found that even though their intelligence was that of young children they still possessed unusually high level of musical ability.