Christian Friedrich Samuel Hahnemann was born in Meissen, Saxony near Dresden. His father, along with many other family members, was a painter and designer of porcelain, for which the town of Meissen is famous.[2]

As a young man, Hahnemann became proficient in a number of languages, including English, French, Italian, Greek and Latin. He eventually made a living as a translator and teacher of languages, gaining further proficiency in "Arabic, Syriac, Chaldaic and Hebrew".[3]

Hahnemann studied medicine for two years at Leipzig. Citing Leipzig's lack of clinical facilities, he moved to Vienna, where he studied for ten months.[4] After one term of further study, he graduated MD at the University of Erlangen on 10 August 1779, qualifying with honors. His poverty may have forced him to choose Erlangen, as the school's fees were lower.[5] Hahnemann's thesis was titled Conspectus adfectuum spasmodicorum aetiologicus et therapeuticus. [A Dissertation on the Causes and Treatment of Cramps][6][7]

In 1781, Hahnemann took a village doctor’s position in the copper-mining area of Mansfeld, Saxony.[8] He soon married Johanna Henriette Kuchler and would eventually have eleven children.[3] After abandoning medical practice, and while working as a translator of scientific and medical textbooks,[9] Hahnemann travelled around Saxony for many years, staying in many different towns and villages for varying lengths of time, never living far from the River Elbe and settling at different times in Dresden, Torgau, Leipzig and Köthen (Anhalt) [10] before finally moving to Paris in June 1835.[11]

Hahnemann claimed that the medicine of his time did as much harm as good:

My sense of duty would not easily allow me to treat the unknown pathological state of my suffering brethren with these unknown medicines. The thought of becoming in this way a murderer or malefactor towards the life of my fellow human beings was most terrible to me, so terrible and disturbing that I wholly gave up my practice in the first years of my married life and occupied myself solely with chemistry and writing.[3]

After giving up his practice around 1784, Hahnemann made his living chiefly as a writer and translator, while resolving also to investigate the causes of medicine's alleged errors. While translating William Cullen's A Treatise on the Materia Medica, Hahnemann encountered the claim that cinchona, the bark of a Peruvian tree, was effective in treating malaria because of its astringency. Hahnemann believed that other astringent substances are not effective against malaria and began to research cinchona's effect on the human body by self-application. Noting that the drug induced malaria-like symptoms in himself, he concluded that it would do so in any healthy individual. This led him to postulate a healing principle: "that which can produce a set of symptoms in a healthy individual, can treat a sick individual who is manifesting a similar set of symptoms."[3] This principle, like cures like, became the basis for an approach to medicine which he gave the name homeopathy. He first used the term homeopathy in his essay Indications of the Homeopathic Employment of Medicines in Ordinary Practice, published in Hufeland's Journal in 1807.[12]

Hahnemann tested substances for the effect they produced on a healthy individual and tried to deduce from this the ills they would heal. From his research, he initially concluded that ingesting substances to produce noticeable changes in the body resulted in toxic effects. He then attempted to mitigate this problem through exploring dilutions of the compounds he was testing. He claimed that these dilutions, when prepared according to his technique of succussion (systematic mixing through vigorous shaking) and potentization, were still effective in alleviating the same symptoms in the sick.

Hahnemann began practicing this new technique, which attracted other doctors c.1792.[citation needed] He first published an article about the homeopathic approach in a German language medical journal in 1796. Following a series of further essays, he published in 1810 'Organon of the Rational Art of Healing,' followed over the years by 4 further editions titled: The Organon of the Healing Art, the first systematic treatise and containing all his detailed instructions on the subject. A 6th Organon edition, unpublished during his lifetime, and dating from February 1842, was only published many years after his death. It consisted of a 5th Organon containing extensive handwritten annotations (A reading of each edition will demonstrate the extent of the revision and experience based additions) .[13] The Organon is widely regarded as a remodelled form of an essay he published in 1806 called "The Medicine of Experience," which had been published in Hufeland's Journal. Of the Organon, Dudgeon states it "was an amplification and extension of his "Medicine of Experience," worked up with greater care, and put into a more methodical and aphoristic form, after the model of the Hippocratic writings." [14]

Around the start of the 19th century Hahnemann developed a theory, propounded in his 1803 essay On the Effects of Coffee from Original Observations, that many diseases are caused by coffee.[15] Hahnemann later abandoned the coffee theory in favour of the theory that disease is caused by Psora, but it has been noted that the list of conditions Hahnemann attributed to coffee was similar to his list of conditions caused by Psora. The coffee theory has been described as "a good example both of Hahnemann's superior mental powers and of his occasional tendency to make up a grand theory from scant evidence".[16] 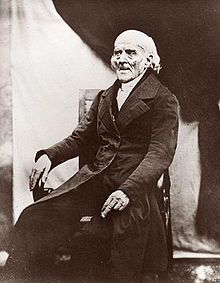 A Daguerrotype of the elderly Samuel Hahnemann in 1841. Hahnemann is notable for being one of the earliest-born people to be immortalised like this.

In early 1811[17] Hahnemann moved his family back to Leipzig with the intention of teaching his new medical system at the University of Leipzig. As required by the university statutes, to become a faculty member he was required to submit and defend a thesis on a medical topic of his choice. On 26 June 1812, Hahnemann presented a Latin thesis, entitled "A Medical Historical Dissertation on the Helleborism of the Ancients."[18] His thesis very thoroughly examined the historical literature and sought to differentiate between the ancient use of Helleborus niger, or black hellebore and the medicinal uses of the "white hellebore," botanically Veratrum album, both of which are poisonous plants related to Buttercup and Magnolia.[19]

Hahnemann continued practicing and researching homeopathy, as well as writing and lecturing for the rest of his life. He died in 1843 in Paris, at 88 years of age, and is entombed in a mausoleum at Paris's Père Lachaise cemetery. 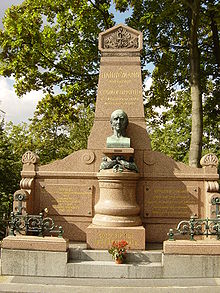 His father, Mr William Herbert Tankard-Hahnemann (1922–2009), the great, great, great grandson of Samuel Hahnemann died on 12 January 2009 (his 87th birthday) after 22 years of active patronage of the British Institute of Homœopathy.[22] As a young boy, William remembered his mother telling him of her visits to her ‘grand-dad Leo’ at Ventnor, Isle of Wight. Later William Hahnemann knew that this was Dr Leopold Süβ-Hahnemann, Dr Samuel Hahnemann’s grandson, the only son of his favourite daughter Amelie (1789–1881). Dr Süβ-Hahnemann was the only member of the Hahnemann family to be present at Samuel Hahnemann’s funeral, apart from Hahnemann’s second wife Mélanie, in Paris in 1843 and at his subsequent re-burial in the Père Lachaise Cemetery in east Paris, where only persons of truly notable distinction are interred. Subsequently Leopold emigrated from France to England where he practised homœopathy in London. He retired to the Isle of Wight and died there at the outbreak of World War I in 1914. Dr Leopold Süβ-Hahnemann’s youngest daughter, Amalia had two children, Winifred (born 1898) and Herbert. Mr William Tankard-Hahnemann was Winifred’s son. Apart from serving as the patron of the British Institute of Homœopathy, he also had a distinguished career in the City of London and was honoured by being appointed as a ‘Freeman of the City of London’.[citation needed] 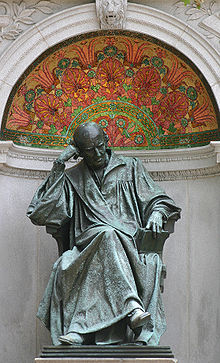 Hahnemann wrote a number of books, essays, and letters on the homeopathic method, chemistry, and general medicine: