for the polynomials of the first and second kind, respectively. These equations are special cases of the Sturm–Liouville differential equation.

The conventional generating function for Tn is

The exponential generating function is

One example of a generating function for Un is

The Chebyshev polynomials of the first kind can be defined by the trigonometric identity:

which is structurally quite similar to the Dirichlet kernel

This identity is extremely useful in conjunction with the recursive generating formula inasmuch as it enables one to calculate the cosine of any integral multiple of an angle solely in terms of the cosine of the base angle. Evaluating the first two Chebyshev polynomials:

one can straightforwardly determine that:

Two immediate corollaries are the composition identity (or the "nesting property")

and the expression of complex exponentiation in terms of Chebyshev polynomials: given z = a + bi,

in a ring R[x].[2] Thus, they can be generated by the standard technique for Pell equations of taking powers of a fundamental solution:

Relation between Chebyshev polynomials of the first and second kinds

This relationship is used in the Chebyshev spectral method of solving differential equations.

Equivalently, the two sequences can also be defined from a pair of mutual recurrence equations:

These can be derived from the trigonometric formulae; for example, if

Note that both these equations and the trigonometric equations take a simpler form if we, like some works, follow the alternate convention of denoting our Un (the polynomial of degree n) with Un+1 instead.

Turán's inequalities for the Chebyshev polynomials are

Different approaches to defining Chebyshev polynomials lead to different explicit formulas such as:

where 2F1 is a hypergeometric function.

A Chebyshev polynomial of either kind with degree n has n different simple roots, called Chebyshev roots, in the interval [−1,1]. The roots are sometimes called Chebyshev nodes because they are used as nodes in polynomial interpolation. Using the trigonometric definition and the fact that

one can easily prove that the roots of Tn are

Similarly, the roots of Un are

The last two formulas can be numerically troublesome due to the division by zero (0/0 indeterminate form, specifically) at x = 1 and x = −1. It can be shown that:

which, if evaluated as shown above, poses a problem because it is indeterminate at x = ±1. Since the function is a polynomial, (all of) the derivatives must exist for all real numbers, so the taking to limit on the expression above should yield the desired value:

where only x = 1 is considered for now. Factoring the denominator:

Since the limit as a whole must exist, the limit of the numerator and denominator must independently exist, and

This latter result is of great use in the numerical solution of eigenvalue problems.

Concerning integration, the first derivative of the Tn implies that

Both the Tn and the Un form a sequence of orthogonal polynomials. The polynomials of the first kind are orthogonal with respect to the weight

This can be proven by letting

and using the identity

Similarly, the polynomials of the second kind are orthogonal with respect to the weight

(Note that the weight

is, to within a normalizing constant, the density of the Wigner semicircle distribution).

For any given n ≥ 1, among the polynomials of degree n with leading coefficient 1,

is the one of which the maximal absolute value on the interval [−1, 1] is minimal.

This maximal absolute value is

and |ƒ(x)| reaches this maximum exactly n + 1 times at

Let's assume that wn(x) is a polynomial of degree n with leading coefficient 1 with maximal absolute value on the interval [−1, 1] less than

Because at extreme points of Tn we have

From the intermediate value theorem, fn(x) has at least n roots. However, this is impossible, as fn(x) is a polynomial of degree n − 1, so the fundamental theorem of algebra implies it has at most n − 1 roots.

Tn are a special case of Lissajous curves with frequency ratio equal to n.

The Chebyshev polynomials of the first kind satisfy the relation

which is easily proved from the product-to-sum formula for the cosine. The polynomials of the second kind satisfy the similar relation

Similar to the formula

we have the analogous formula 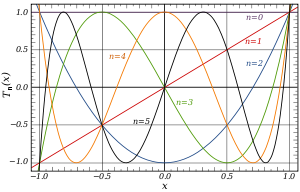 The first few Chebyshev polynomials of the first kind are 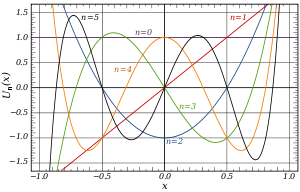 The first few Chebyshev polynomials of the second kind are

As a basis set 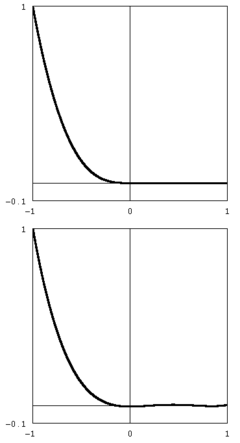 The non-smooth function (top) y = −x3H(−x), where H is the Heaviside step function, and (bottom) the 5th partial sum of its Chebyshev expansion. The 7th sum is indistinguishable from the original function at the resolution of the graph.

In the appropriate Sobolev space, the set of Chebyshev polynomials form a complete basis set, so that a function in the same space can, on −1 ≤ x ≤ 1 be expressed via the expansion:[3]

Furthermore, as mentioned previously, the Chebyshev polynomials form an orthogonal basis which (among other things) implies that the coefficients an can be determined easily through the application of an inner product. This sum is called a Chebyshev series or a Chebyshev expansion.

Since a Chebyshev series is related to a Fourier cosine series through a change of variables, all of the theorems, identities, etc. that apply to Fourier series have a Chebyshev counterpart.[3] These attributes include:

The abundance of the theorems and identities inherited from Fourier series make the Chebyshev polynomials important tools in numeric analysis; for example they are the most popular general purpose basis functions used in the spectral method,[3] often in favor of trigonometric series due to generally faster convergence for continuous functions (Gibbs' phenomenon is still a problem).

Consider the Chebyshev expansion of log(1 + x). One can express

One can find the coefficients an either through the application of an inner product or by the discrete orthogonality condition. For the inner product,

Alternatively, when you cannot evaluate the inner product of the function you are trying to approximate, the discrete orthogonality condition gives

To provide another example:

The partial sums of

are very useful in the approximation of various functions and in the solution of differential equations (see spectral method). Two common methods for determining the coefficients an are through the use of the inner product as in Galerkin's method and through the use of collocation which is related to interpolation.

As an interpolant, the N coefficients of the (N − 1)th partial sum are usually obtained on the Chebyshev–Gauss–Lobatto[4] points (or Lobatto grid), which results in minimum error and avoids Runge's phenomenon associated with a uniform grid. This collection of points corresponds to the extrema of the highest order polynomial in the sum, plus the endpoints and is given by:

An arbitrary polynomial of degree N can be written in terms of the Chebyshev polynomials of the first kind. Such a polynomial p(x) is of the form

Polynomials in Chebyshev form can be evaluated using the Clenshaw algorithm.