Chibi Maruko-chan (ちびまる子ちゃん?) is a shōjo manga series by Momoko Sakura, later adapted into an anime TV series by Nippon Animation, which originally aired on Fuji Television from January 7, 1990 to September 27, 1992. The series depicts the simple, everyday life of a little girl nicknamed Maruko and her family in suburban mid-seventies Japan. The series is set in the former city of Shimizu, now part of Shizuoka City, birthplace of its author.

The first story under the title "Chibi Maruko-chan" was published in the August 1986 edition of the shōjo manga magazine Ribon. Other semi-autobiographical stories by the author had appeared in Ribon and Ribon Original in 1984 and 1985, and were included in the first "Chibi Maruko-chan" tankōbon in 1987. The author first began writing and submitting strips in her final year of senior high school, although Shueisha (the publisher of Ribon and Ribon Original) did not decide to run them until over a year later. The author's intent was to write "essays in manga form".[1] Many stories are inspired by incidents from the author's own life, and some characters are based on her family and friends. The nostalgic, honest and thoughtful tone of the strip led to its becoming popular among a wider audience.

The Chibi Maruko-chan series has spawned numerous games, animated films and merchandising, as well as a second TV series running from 1995 to the present. Maruko's style and themes are sometimes compared to the classic comic Sazae-san. In 1989, the manga tied to receive the Kodansha Manga Award for shōjo.[2] As of 2006, the collected volumes of the manga had sold more than 31 million copies in Japan, making it the fifth best-selling shōjo manga ever.[3]

The trademark face fault of this series, the manga and anime and drama all, in reaction to an awkward "don't know what to say" situation (or sometimes, embarrassment) is the sudden appearance of vertical lines (黒い線, kuroi sen?) on a character's face, sometimes with an unexplained gust of wind blowing above that character's head. 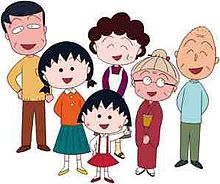 Momoko "Maruko" Sakura (さくらももこ, Sakura Momoko?, まる子 Maruko)
Voiced by: Tarako, Live-Action: Ei Morisako
The title character, Maruko (born May 8, 1965) is a nine-year-old third-grade student raised in a relatively poor family of six. She is lazy, disorganized and usually late for school, in strong contrast with her neat, calm and tidy older sister (sixth-grader) who must share her room with her. Maruko, like many kids, tries to avoid homework and chores, and she takes advantage of her doting grandfather and squabbles with her sister. Nevertheless, she is a well-meaning child who tries to do good. She is similar to Calvin in Calvin and Hobbes in that she often uses adult-like language to express her child-like feelings. She has many food dislikes, including natto and tomatoes. She loves reading manga and is a good artist, and her stated goal is to become a manga artist when she grows up. It is implied that the show is drawn by Maruko herself. Maruko has a problem with her sister cooking and throws whirlwind tantrums. She knows a lot about her mother, father and grandmother.

Hiroshi Sakura (さくらひろし, Sakura Hiroshi?)
Voiced by: Yūsaku Yara, Live-Action: Katsumi Takahashi
Maruko's father. He was introduced to Maruko's mother by her friend. He drinks every now and then but is a kind loving dad. His birthday is June 20, 1934, making him 40 years old during the series.

Sumire Sakura (さくらすみれ, Sakura Sumire?)
Voiced by: Teiyū Ichiryūsai, Live-Action: Michiko Shimizu
Maruko's mother. She tends to scold Maruko a lot. She is a strict mother but a very pleasant one. She's extremely focused on household finances, and shops mainly at department stores during bargain sales. Her birthdate is May 25, 1934. It is revealed in one episode that her maiden name is Kobayashi.

Sakiko Sakura (さくらさきこ, Sakura Sakiko?)
Voiced by: Yūko Mizutani, Live-Action: Mayuko Fukuda
Maruko's older sister. She is clever and diligent, the exact opposite of the lazy Maruko. She and Maruko fight often but they get along fine. Her birthday is March 21, 1962, making her 12 in the series.

Tomozou Sakura (さくら友蔵, Sakura Tomozō?)
Voiced by: Kei Tomiyama (1990-1995), Takeshi Aono (1995-2010), Bin Shimada (2010-), Live-Action: Fuyuki Moto
Maruko's kind but absent-minded grandfather. Naive and easily tricked, he keeps a pet turtle and loves watching TV with Maruko. When feeling distressed or nostalgic, he spontaneously retreats to a surreal inner world for a few seconds to improvise a sad yet comical haiku about his state of mind. His birthday is October 3, 1898, making him 76 in the series. The author has said that she used her own grandfather as the model for Tomozou, but that his personality is the opposite of Tomozou's.

Kotake Sakura (さくらこたけ, Sakura Kotake?)
Voiced by: Yūko Sasaki, Live-Action: Yoshie Ichige
Maruko's grandmother. She's wise and knows what's good for the human body. She was born on April 4, 1904. Her name of Kotake was never known in the series until it appeared in a 4-panel manga (Yonkoma) on July 1, 2007.

Maruko's best friend. She is intelligent and she does not include herself in other activities with Maruko. Nicknamed Tama-chan.

A really rich boy in Maruko's class who lives in a mansion his caretaker is Mr. Hideji. His mom is always away travelling and so he doesn't see her that often. He also has a butler who drives a limo and picks him up every day from school. Hanawa is mentioned to have a crush on Maruko. His was born on August 7, 1965.

Maruo is one of Maruko's classmates and serves as the male class president and always wants to be admired by others. He has very thick glasses because he is a very serious student and studies very hard every day; black lines appear on his face nearly all of the time, especially when he seems euphoric. He is paranoid that his classmates are seeking to replace him as male class president and will target classmates that stand out and do well to discourage them from running against him. His birthday is December 31, thus giving rise to his name.

Hamaji is the most mischievous student in Maruko's class. Despite this he is the class representative.

A boy in Maruko's class with a piglike face and ends his sentences with "buu," the Japanese onomatopoeia for a pig snorting. He is close friend of Hamaji and is always shown with him.

She is crazy about Hanawa and does not like other girls being around with him and because Hanawa has a crush on Maruko, she is hard on Maruko. She is studying in standard 3 for the last five years because she is not good in her studies and fails every year. She is the female class president and like Maruko is pretty intent on maintaining her position, even promising along with Maruo to come in the morning to do cleaning and other work so their classmates don't have to.

Despite seeming mean, he actually is a nice boy who once helped Maruko learn how to ride a bicycle.

His house was burned down during an accident and made his family poor in the episodes they always show a connection with fire of Nagasama. Therefore he always felt that nobody cares about him, and that everybody is out to laugh about him. He is thus became very aloof and does not talk much to other people except Fujiki, his best friend.

A very soft-spoken boy who is the best friend of Nagasawa. He lives alone in his home, causing his parents to go their offices early in the morning and come back late night.

He laughs non-stop about anything good or bad. He is also known as the "classroom idiot boy" (クラスのバカ男子).

He is Sugiyama Satoshi's best friend. Both of them love soccer.

Kenichi's best friend. Though they are quite rude, they are very serious when it comes to work. They form a good team and help each other.

Toshiko is a very obedient and well-mannered girl. She always cares about others and also one of Maruko's and Tama's good friends.

She has a crush on Ono Kenichi. She is a bit odd and likes to give cards to people depicting strange faces.

This character only appeared in the first series and was in a trio with Maruko and Tamae.

A transfer student from Aichi. He appears Indian despite the fact of getting rejections from his classmates.

A likeable boy who was nominated by Sekiguchi to be male class president, but conceded the race when Maruo promised to come in and clean every morning so the class didn't have to.

He is a fan a Michiru Jo and has digestive problems.

A fatty who eats a lot.

She is in charge of cleaning the classroom.

A very creepy girl who always jokes. She also likes to make fun of others, especially Maruko. She often spies on people.

Sasayama's friend. She has alleged rivalry with Nagasawa.

Hanawa's butler. He is named after singer Hideki Saijo.

Shintarō is Tamae's father. He likes photography a lot and whenever he spots Tamae, takes a photo of her.

Sasaki is fond of trees and grows them. He is fondly called by Maruko- Sasaki Ojichan.

The original Chibi Maruko-chan manga was serialized in the shōjo-oriented Ribon Magazine. 14 volumes were published from July 1987 to December 1996, with a 15th volume published in February 2003. On July 2007, a 4-frame version of Chibi Maruko-chan was published in every morning edition of several Japanese newspapers such as the Tokyo Shimbun and the Chunichi Shimbun.

Chibi Maruko-chan originally aired on Fuji Television. 142 episodes were broadcast, from January 1990 to September 1992. Maruko was voiced by Tarako; other voice actors included Kappei Yamaguchi and Hideki Saijo. Original manga author Momoko Sakura wrote the teleplay for most episodes. The first season was directed by Yumiko Suda and animated by Masaaki Yuasa (who later directed Mind Game in 2004). The series attained a TV viewer rating of 39.9%, the highest rating ever attained by an animated TV series in Japan at the time.[4] The theme song Odoru Ponpokorin became a hit and was interpreted by several artists including the KinKi Kids and Captain Jack. The series was exported throughout Asia and was especially popular in Taiwan. In addition, 65 episodes were dubbed into Arabic (called maruko-alsaghera, which means Little Maruko), where it garnered attention from people of all ages. It also aired in Germany with the same title as the original. It airs weekdays on Nick India in India.[5]

A second series debuted in January 1995, in the 6pm time slot before Sazae-san on Sunday evenings. This series was also dubbed into German and broadcast by RTL II, Super RTL and Jetix in Germany.

A live action series was shown on Fuji Television in 2006. The series was created to commemorate Chibi Maruko-chan's 15th anniversary and had 3 episodes, each 2 hours. All costumes and hairstyles are faithful to the original manga.

Both the second television series and the live action series were broadcast in 1080i HDTV.

All the Game Boy titles (which consists of minigames) were developed by KID and published by Takara. The other titles were published by different companies like Namco, Konami, Epoch and Banpresto.