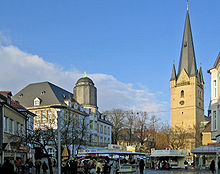 Menden (Sauerland) is a town in the district Märkischer Kreis, in North Rhine-Westphalia, Germany. It is located at the north end of the Sauerland near the Ruhr river.

Menden's first churches were built in the 9th century. From 1180 on the area around Menden was part of the Cologne region, however, as it was on the border with the County of Mark, it was often fought over. In 1276, it received city rights. Industrialization started early: in 1695 needle production was the first industry, later followed by limestone products like cement. In 1816 Menden was included within Prussia, after being part of Hesse for 13 years. In 1975 the city was merged with several previously independent municipalities, thus it grew in area as well as population.

The Hönnetal, a narrow valley with some beautiful cliffs carved into the limestone bedrock by the river Hönne.

In Menden (Sauerland), there are eleven (elementary schools).

The theatre, managed by the city government, is the "Theater am Ziegelbrand" (TAZ). The director is Volker Fleige.

A festival is Menden à la carte. It is organized by the Initiativkreis Mendener Wirtschaft.