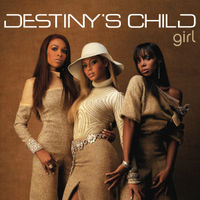 "Girl" is an pop song performed by R&B girl group . It was written by , , Michelle Williams, , Ric Rude, , , and for fourth studio album "" (2004). Produced by Knowles, and , the song contains elements and samples from the song "Ocean of Thoughts and Dreams" as written by and , and performed by . Released as the album's third single, the single peaked at number 23 on the U.S. "" , making it Destiny's Child's lowest charting single since 1999's "".

The video is split into two "universes": Destiny's Child in Beyoncé's apartment and the same trio on a fictional television show. The video begins with Beyoncé, Michelle, and Kelly entering Beyoncé's apartment and settling down with snacks and wine as they watch a fictional show styled after "". After the mock credits, Beyoncé and Michelle meet Kelly for lunch. Throughout the video, the women at home respond to the events of the program through gestures and actions, while, on the television, the dialogue of the song matches the conversation of the women in the restaurant.

Beyoncé confronts Kelly about her sad demeanor and suspected boyfriend problems, but Kelly feigns shock and insists that nothing is wrong. Neither Michelle nor Beyoncé is convinced. Viewers can see that, on one occasion, her boyfriend took hours to come home without explanation and, when he finally arrived, a hurt Kelly threw his food away before running upstairs to cry. Kelly admits to some problems, while making excuses for her boyfriend, such as his busy schedule and her own moodiness. Beyoncé, however, rolls her eyes at the thin excuses, and assures Kelly that she and Michelle love her and she need not suffer alone. At this, Kelly begins to cry and laugh at the same time. Michelle goes on to tell her of the day she confronted Kelly's boyfriend when she saw him browsing through jewelry with another woman.

Later on, Kelly can seen be seen looking cold and angry as her boyfriend comes home. He arrives apologetic, but Kelly perks up, dangling a pair of fuzzy handcuffs. He smiles and begins to follow her upstairs. In the immediately following scene, he is naked except for a pair of boxers (in some versions, his rear-end is blurred out) and handcuffed to the balcony. With her bags packed and the handcuff key in hand, she leaves—laughing happily. The girls are finally seen walking down the city street, holding hands, as an image of them passes by on a city bus.

The song was chosen to be a single over "" in a vote at Destiny's Child's official site. However, the song underperformed in comparison with earlier singles, peaking at number 23 on the U.S. "" singles chart and number 10 on the chart. The single suffered from low downloads, which kept it from reaching the top 20. After "Girl" underperformed, Destiny's Child released "" as the fourth single from the album.

Despite "Girl" peaking at a disappointing position in the US, the single picked up strong airplay and videoplay in the UK. It became a top 10 entry for the band, gaining a #number peak. "Girl" is also known as the group's final single on the European music market, as subsequent singles, "" and "" were both cancelled due to their underperformance in the American charts. In Australia, "Girl" became a top 5 hit in both the Urban and ARIA official charts.